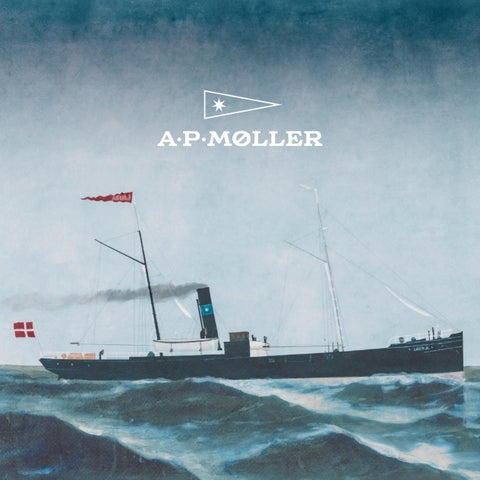 THE STORY OF THE STAR

In a letter, Peter Mærsk Møller

THE MAERSK STAR – has

describes how this incident was

the origin of the star:

since 1886. “The little star on the funnel Ane Møller occasionally accom-

is a reminder of the evening I

prayed for you so dejectedly and

Peter Mærsk Møller, on his ships

during the latter part of the 19th

that I might see a star in the grey,

century, and at one point fell

overcast sky, a reminder that the

seriously ill on a voyage with him.

activities run or controlled by the

the star was chosen to guide the

family, such as Maersk Broker,

its black funnel ringed with a blue

band with a white seven-pointed

star on each side.

The Maersk star was subsequently applied to new business

Today’s version of the Maersk

ble for several design icons of

logo was designed by the archi-

tect and industrial designer Acton Bjørn in 1972, as part of

a brand project initiated and

star pennant as logo for the

design agency together with

Moller Holding, as a reference to

For 135 years, the Maersk star has been used on vessels, logos and office flags.

A.P. MOLLER HOLDING, the parent company of the A.P. Moller Group, invests in and builds businesses that have a positive impact on society – ‘nyttig virksomhed’. We aspire to drive long-term shareholder value of our businesses. Through engaged ownership, we leverage our founding family’s core values, company insights and global networks, to set our businesses up for success, while supporting local communities.