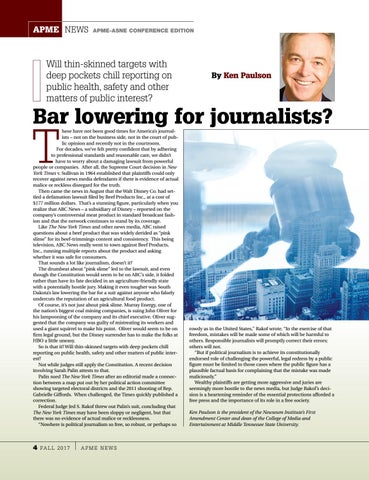 Will thin-skinned targets with deep pockets chill reporting on public health, safety and other matters of public interest?

hese have not been good times for America’s journalists – not on the business side, not in the court of public opinion and recently not in the courtroom. For decades, we’ve felt pretty confident that by adhering to professional standards and reasonable care, we didn’t have to worry about a damaging lawsuit from powerful people or companies. After all, the Supreme Court decision in New York Times v. Sullivan in 1964 established that plaintiffs could only recover against news media defendants if there is evidence of actual malice or reckless disregard for the truth. Then came the news in August that the Walt Disney Co. had settled a defamation lawsuit filed by Beef Products Inc., at a cost of $177 million dollars. That’s a stunning figure, particularly when you realize that ABC News – a subsidiary of Disney – reported on the company’s controversial meat product in standard broadcast fashion and that the network continues to stand by its coverage. Like The New York Times and other news media, ABC raised questions about a beef product that was widely derided as “pink slime” for its beef-trimmings content and consistency. This being television, ABC News really went to town against Beef Products, Inc., running multiple reports about the product and asking whether it was safe for consumers. That sounds a lot like journalism, doesn’t it? The drumbeat about “pink slime” led to the lawsuit, and even though the Constitution would seem to be on ABC’s side, it folded rather than have its fate decided in an agriculture-friendly state with a potentially hostile jury. Making it even tougher was South Dakota’s law lowering the bar for a suit against anyone who falsely undercuts the reputation of an agricultural food product. Of course, it’s not just about pink slime. Murray Energy, one of the nation’s biggest coal mining companies, is suing John Oliver for his lampooning of the company and its chief executive. Oliver suggested that the company was guilty of mistreating its workers and used a giant squirrel to make his point. Oliver would seem to be on firm legal ground, but the Disney surrender has to make the folks at HBO a little uneasy. So is that it? Will thin-skinned targets with deep pockets chill reporting on public health, safety and other matters of public interest? Not while judges still apply the Constitution. A recent decision involving Sarah Palin attests to that. Palin sued The New York Times after an editorial made a connection between a map put out by her political action committee showing targeted electoral districts and the 2011 shooting of Rep. Gabrielle Giffords. When challenged, the Times quickly published a correction. Federal Judge Jed S. Rakof threw out Palin’s suit, concluding that The New York Times may have been sloppy or negligent, but that there was no evidence of actual malice or recklessness. “Nowhere is political journalism so free, so robust, or perhaps so

rowdy as in the United States,” Rakof wrote. “In the exercise of that freedom, mistakes will be made some of which will be harmful to others. Responsible journalists will promptly correct their errors; others will not. “But if political journalism is to achieve its constitutionally endorsed role of challenging the powerful, legal redress by a public figure must be limited to those cases where the public figure has a plausible factual basis for complaining that the mistake was made maliciously.” Wealthy plaintiffs are getting more aggressive and juries are seemingly more hostile to the news media, but Judge Rakof’s decision is a heartening reminder of the essential protections afforded a free press and the importance of its role in a free society. Ken Paulson is the president of the Newseum Institute’s First Amendment Center and dean of the College of Media and Entertainment at Middle Tennessee State University.

Inside this issue: The President s Corner: Thanks, AP and APME. You have become family. Ken Paulson: Recently, courts have been tough on American journalists Simon says: APME president-elect to push for free press and news literacy Capital Ideas: Exploring the intersection of journalism and citizenship Off the trail: AP D.C. metro reporter offers advice on touring the capital D.C. to-do list: Take time to remind yourself of the greatness of D.C. Speaker: What to expect at A Conversation with Leonard Pitts Jr. Speaker: Rochelle Riley discusses what it s like to be a jane-of-all-trades The schedule: Your guide to conference meetings, events and more Speaker: Q&A with outgoing ASNE president Mizell Stewart III Innovator of the Year: Nominees from L.A., Milwaukee and Boston Conference Briefs: Carbajal to serve as new ASNE president APME Officers: Roster of APME Board of Directors