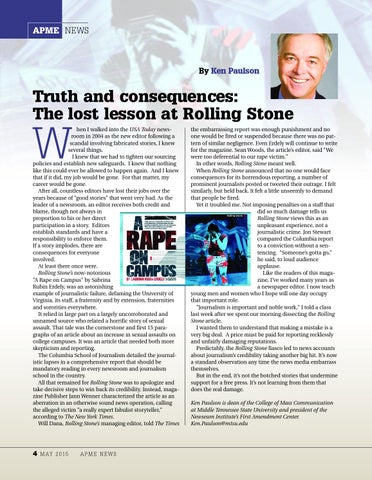 Truth and consequences: The lost lesson at Rolling Stone

hen I walked into the USA Today newsroom in 2004 as the new editor following a scandal involving fabricated stories, I knew several things. I knew that we had to tighten our sourcing policies and establish new safeguards. I knew that nothing like this could ever be allowed to happen again. And I knew that if it did, my job would be gone. For that matter, my career would be gone. After all, countless editors have lost their jobs over the years because of “good stories” that went very bad. As the leader of a newsroom, an editor receives both credit and blame, though not always in proportion to his or her direct participation in a story. Editors establish standards and have a responsibility to enforce them. If a story implodes, there are consequences for everyone involved. At least there once were. Rolling Stone’s now-notorious “A Rape on Campus” by Sabrina Rubin Erdely, was an astonishing example of journalistic failure, defaming the University of Virginia, its staff, a fraternity and by extension, fraternities and sororities everywhere. It relied in large part on a largely uncorroborated and unnamed source who related a horrific story of sexual assault. That tale was the cornerstone and first 15 paragraphs of an article about an increase in sexual assaults on college campuses. It was an article that needed both more skepticism and reporting. The Columbia School of Journalism detailed the journalistic lapses in a comprehensive report that should be mandatory reading in every newsroom and journalism school in the country. All that remained for Rolling Stone was to apologize and take decisive steps to win back its credibility. Instead, magazine Publisher Jann Wenner characterized the article as an aberration in an otherwise sound news operation, calling the alleged victim “a really expert fabulist storyteller,” according to The New York Times. Will Dana, Rolling Stone’s managing editor, told The Times

the embarrassing report was enough punishment and no one would be fired or suspended because there was no pattern of similar negligence. Even Erdely will continue to write for the magazine. Sean Woods, the article’s editor, said “We were too deferential to our rape victim.” In other words, Rolling Stone meant well. When Rolling Stone announced that no one would face consequences for its horrendous reporting, a number of prominent journalists posted or tweeted their outrage. I felt similarly, but held back. It felt a little unseemly to demand that people be fired. Yet it troubled me. Not imposing penalties on a staff that did so much damage tells us Rolling Stone views this as an unpleasant experience, not a journalistic crime. Jon Stewart compared the Columbia report to a conviction without a sentencing. “Someone’s gotta go,” he said, to loud audience applause. Like the readers of this magazine, I’ve worked many years as a newspaper editor. I now teach young men and women who I hope will one day occupy that important role. “Journalism is important and noble work,” I told a class last week after we spent our morning dissecting the Rolling Stone article. I wanted them to understand that making a mistake is a very big deal. A price must be paid for reporting recklessly and unfairly damaging reputations. Predictably, the Rolling Stone fiasco led to news accounts about journalism’s credibility taking another big hit. It’s now a standard observation any time the news media embarrass themselves. But in the end, it’s not the botched stories that undermine support for a free press. It’s not learning from them that does the real damage. Ken Paulson is dean of the College of Mass Communication at Middle Tennessee State University and president of the Newseum Institute’s First Amendment Center. Ken.Paulson@mtsu.edu

APME News has a nice blend of new insight and reliable features: • Ken Paulson, dean of the College of Mass Communication at Middle Tennessee State University and president of the First Amendment Center of the Newseum Institute, weighs in on the aftermath of Rolling Stone s recanted sexual assault story and whether editors are being held properly accountable. • We bring you updates on APME s efforts in Diversity, • First Amendment and outreach to higher educationthrough our new Editor-Educator Exchange program. • Autumn Phillips' popular How They Did It series visits the St. Louis Post-Dispatch s coverage of Ferguson and a Pulitzer-winning effort by The Washington Post. • We bring you up to speed on the latest opportunities to catch NewsTrain, APME s premier training program. • And we give you insight into changes in AP style that will debut in the next edition of the AP Stylebook All that, plus our roundup of Editors in the News and other updates,