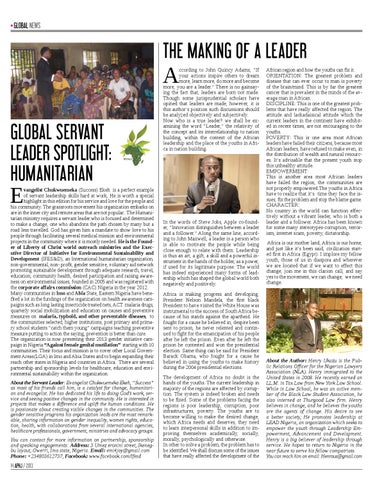 THE MAKING OF A LEADER

ccording to John Quincy Adams, “If your actions inspire others to dream more, learn more, do more and become more, you are a leader.” There is no gainsaying the fact that, leaders are born not made. Though some jurisprudential scholars have opined that leaders are made, however, it is this author’s position such discussions should be analyzed objectively and subjectively. Now who is a true leader? we shall be examining the word “Leader,” the relativity of the concept and its interrelationship to nation building, within the context of the African leadership and the place of the youths in Africa in nation building.

vangelist Chukwuemeka (Success) Ekeh is a perfect example of servant leadership skills hard at work, He is worth a special highlight in this edition for his service and love for the people and his community. The grassroots movement his organization embarks on are in the inner city and remote areas that are not popular. The Humanitarian ministry requires a servant leader who is focused and determined to make a change, one who abandons the path chosen by many but a road less travelled. God has given him a mandate to show love to his people through facilitating several medical mission and environmental projects in the community where it is mostly needed. He is the Founder of Liberty of Christ world outreach ministries and the Executive Director of Initiative for Environmental Sustainability and Development (IFES&amp;D), an International humanitarian organization, non-governmental, non- profit, gender sensitive, voluntary aid network promoting sustainable development through adequate research, travel, education, community health, desired participation and raising awareness on environmental issues, founded in 2005 and was registered with the corporate affairs commission (CAC) Nigeria in the year 2012. Many communities in Imo and Abia State, Eastern Nigeria have benefited a lot in the fundings of the organization on health awareness campaigns such as long lasting insecticide treated nets, ACT malaria drugs, quarterly social mobilization and education on causes and preventive measures on malaria, typhoid, and other preventable diseases, to the communities selected, higher institutions, post primary and primary school students “catch them young” campaigns teaching preventive measure putting to action the saying, prevention is better than cure. The organization is now presenting their 2013 gender initiative campaign in Nigeria “Against female genital mutilation” starting with 10 communities. Their focus and mission is to cover other Local Government Areas(LGA) in Imo and Abia States and to begin expanding their reach other states in Nigeria and countries in Africa. There are several partnership and sponsorship levels for healthcare, education and environmental sustainability within the organization. About the Servant Leader: Evangelist Chukwuemeka Ekeh, “Success” as most of his friends call him, is a catalyst for change, humanitarian and evangelist. He has dedicated his life to doing God’s work, service and seeing positive changes in the community. He is interested in projects that makes a difference and uplift the human conditions. He is passionate about creating visible changes in the communities. The gender sensitive programs his organization leads are the most remarkable, sharing information on gender inequality, women rights, education, health, with collaborations from several international agencies, healthcare professionals, government, ministries and advocacy groups. You can contact for more information on partnership, sponsorship and speaking engagements: Address: 3 Umez eronini street, Ikenegbu layout, Owerri, Imo state, Nigeria. Email: emi4joy@gmail.com Phone: +234803612737, Facebook: www.facebook.com/Ifesd 14 APHJ / 2013

In the words of Steve Jobs, Apple co-founder, “Innovation distinguishes between a leader and a follower.” Along the same line, according to John Maxwell, a leader is a person who is able to motivate the people while being close enough to relate with them. Leadership is thus an art, a gift, a skill and a powerful instrument in the hands of the holder, as a power, if used for its legitimate purpose. The world has indeed experienced many forms of leadership which has shaped the global world both negatively and positively. Africa is making progress and developing, President Nelson Mandela, the first black President to have visited the White House was instrumental to the success of South Africa because of his stands against the apartheid. He fought for a cause he believed in, despite been sent to prison, he never relented and continued to fight for the emancipation of his people after he left the prison. Even after he left the prison he contested and won the presidential election. Same thing can be said for President Barack Obama, who fought for a cause he believed in using the youths to make history during the 2004 presidential elections. The development of Africa no doubt is the hands of the youths. The current leadership in majority of the regions are affected by corruption. The system is indeed broken and needs to be fixed. Some of the problems facing the regions is poor leadership, corruption, poor infrastructures, poverty. The youths are to become willing to make the desired change, which Africa needs and deserves, they need to learn interpersonal skills in addition to improving themselves academically, socially, morally, psychologically and otherwise. In other to solve a problem, the problem has to be identified. We shall discuss some of the issues that have really affected the development of the

African region and how the youths can fix it. ORIENTATION: The greatest problem and disease that can ever occur to man is poverty of the brain/mind. This is by far the greatest cancer that is prevalent in the minds of the average man in African. DISCIPLINE: This is one of the greatest problems that have really affected the region. The attitude and lackadaisical attitude which the current leaders in the continent have exhibited in recent times, are not encouraging to the youths. POVERTY: This is one area most African leaders have failed their citizens, because most African leaders, have refused to make even, in the distribution of wealth and natural resources. It’s advisable that the present youth stop this unhealthy attitude. EMPOWERMENT: This is another area most African leaders have failed the region, the communities are not properly empowered.The youths in Africa have to realize that it’s time they face the issues, fix the problem and stop the blame game. CHARACTER: No country in the world can function effectively without a vibrant leader, who is both a leader and a follower. Africa has been known for some many stereotypes-corruption, terrorism, internet scam, poverty, dictatorship. Africa is our mother land, Africa is our home, and just like it’s been said, civilization started first in Africa (Egypt). I implore my fellow youth, those of us in diaspora and wherever we are located that if we want to effect this change, join me in this clarion call, and say yes to the movement, we can change, we need change.

About the Author: Henry Ukazu is the Public Relations Officer for the Nigerian Lawyers Association (NLA). Henry immigrated to the United States in 2008. He recently earned an LL.M. in Tax Law from New York Law School. While in Law School, he was an active member of the Black Law Student Association, he also interned at Thurgood Law firm. Henry believes in change, and he believes the youths are the agents of change. His desire to see a better society, He promotes leadership at LEAD Nigeria, an organization which seeks to empower the youth through Leadership Empowerment, Advancement and Development. Henry is a big believer of leadership through service. He hopes to return to Nigeria in the near future to serve his fellow compatriots. You can reach him on email: Henrous@gmail.com

This is one of the most anticipating projects under APH in 2013. This year's theme is Africa Future Leaders: The Next Generation which features Okdabooks, Aesthetic Beauty, Generation Rochas and many more. 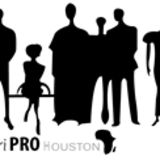