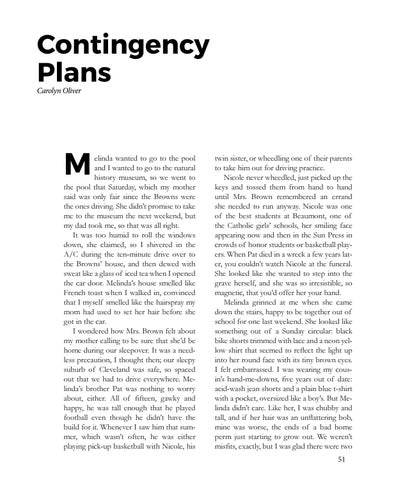 elinda wanted to go to the pool and I wanted to go to the natural history museum, so we went to the pool that Saturday, which my mother said was only fair since the Browns were the ones driving. She didn’t promise to take me to the museum the next weekend, but my dad took me, so that was all right. It was too humid to roll the windows down, she claimed, so I shivered in the A/C during the ten-minute drive over to the Browns’ house, and then dewed with sweat like a glass of iced tea when I opened the car door. Melinda’s house smelled like French toast when I walked in, convinced that I myself smelled like the hairspray my mom had used to set her hair before she got in the car. I wondered how Mrs. Brown felt about my mother calling to be sure that she’d be home during our sleepover. It was a needless precaution, I thought then; our sleepy suburb of Cleveland was safe, so spaced out that we had to drive everywhere. Melinda’s brother Pat was nothing to worry about, either. All of fifteen, gawky and happy, he was tall enough that he played football even though he didn’t have the build for it. Whenever I saw him that summer, which wasn’t often, he was either playing pick-up basketball with Nicole, his

twin sister, or wheedling one of their parents to take him out for driving practice. Nicole never wheedled, just picked up the keys and tossed them from hand to hand until Mrs. Brown remembered an errand she needed to run anyway. Nicole was one of the best students at Beaumont, one of the Catholic girls’ schools, her smiling face appearing now and then in the Sun Press in crowds of honor students or basketball players. When Pat died in a wreck a few years later, you couldn’t watch Nicole at the funeral. She looked like she wanted to step into the grave herself, and she was so irresistible, so magnetic, that you’d offer her your hand. Melinda grinned at me when she came down the stairs, happy to be together out of school for one last weekend. She looked like something out of a Sunday circular: black bike shorts trimmed with lace and a neon yellow shirt that seemed to reflect the light up into her round face with its tiny brown eyes. I felt embarrassed. I was wearing my cousin’s hand-me-downs, five years out of date: acid-wash jean shorts and a plain blue t-shirt with a pocket, oversized like a boy’s. But Melinda didn’t care. Like her, I was chubby and tall, and if her hair was an unflattering bob, mine was worse, the ends of a bad home perm just starting to grow out. We weren’t misfits, exactly, but I was glad there were two 51 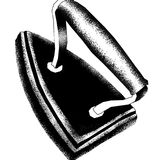