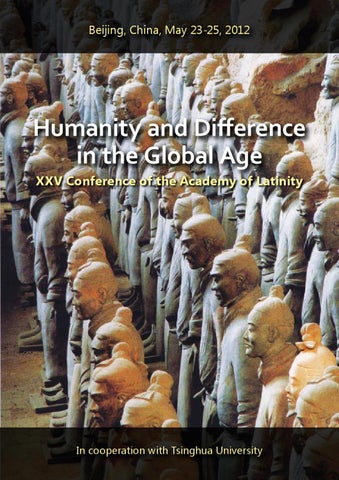 In cooperation with Tsinghua University

HUMANITY AND DIFFERENCE IN THE GLOBAL AGE XXV Conference of the Academy of Latinity Beijing, China May 23-25, 2012 Centered on the theme “Humanity and Difference in the Global Age,” the Beijing Conference allowed for a level of response in itself elucidative of this limit-question of our days, implying as well the loss of the universals for the understanding of the so-called contemporaneity as a plunge into the discourse of the fracture of the social times in the universe of the assertion of identities released from the western general horizon. With China as scenery, the critical consciousness of multiculturalism becomes more acute in the face of a new questioning on the emergent subjectivity. From the beginning, we proceed to the search of these extreme conditions in which the task of social recognition will require the heuristic of what could be the very idea of globalization. As a final awareness regarding the inner meaning of difference nowadays, the conference asks about the real dimension of technology as indeed one of an ontological nature in strict relation to what we call “Being,” truth or value. Living a historical momentum, so far from our beliefs at the turn of the century, the search still for a dialogue in the verge of a “war of religions” outstretches even an epistemological framework, bound by the concern of human rights far beyond a “western ideology.”

▪▪ Helena Barroco — The UN Alliance of Civilizations’ perspective in our age of diversity 3:00 pm — Second Session Technology and World Civilization

▪▪ Gianni Vattimo — The question concerning technology today ▪▪ Lydia H. Liu — The Freudian robot: rethinking the human and the machine ▪▪ He Xirong — A contemporary significance on Chinese traditional mode of thinking

HUMANITY AND DIFFERENCE IN THE GLOBAL AGE

XXV Conference of the Academy of Latinity

Thursday, May 24 9:00 am — Third Session Reinventions and Interactions

▪▪ Candido Mendes — A humanism for our time ▪▪ Tong Shijun — A whole new hope: a discussion 90 years after Bertrand Russell’s ‘The problem of China’ ▪▪ Daniel Innerarity — Politics after indignation ▪▪ Santiago Zabala — The only emergency is the lack of events

▪▪ François L´Yvonnet — The European “self-closure” ▪▪ Jérôme Bindé — Identity and difference beyond fundamentalism and globalization ▪▪ Maria Isabel Mendes de Almeida — Contemporary creativity and the redesigning of the relationship between author and work: the exhaustion of the creative outburst ▪▪ Yang Huilin — The verbal logic of identity

▪▪ Enrique Rodríguez Larreta — The present point in history: reflections on a transitional age ▪▪ Renato Janine Ribeiro — Brazil and the emergence of the South ▪▪ Gilbert Hottois — Science and technology: from modern to postmodern representations ▪▪ Javier Sanjinés C. — Mariátegui and the Andean revolutionarism 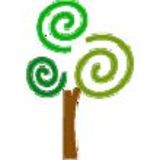