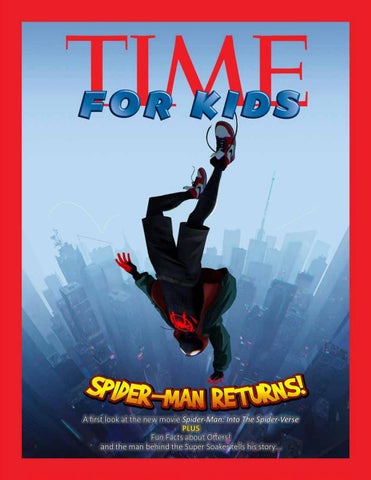 A first look at the new movie Spider-Man: Into The Spider-Verse PLUS Fun Facts about Otters! and the man behind the Super Soaker tells his story...

Learn about the origins of possibly the most fun summer time water toy, The Super Soaker, and itâ&amp;#x20AC;&amp;#x2122;s creator!

Otters: Fascinating Facts and More Explore the world of some of the cutest aquatic mammals that can be found in North America - the Sea and River Otter!

A first look at the new movie: Who is the new Spider-Man? Check out the Team!

WHO IS MILES MORALES? Character Traits Miles is a social and assertive teenager who is very popular in his neighborhood of Brooklyn. He is a promising kid with massive potential, who just wants to be normal, but often does amazing things while trying to avoid the spotlight. He is a nice and friendly kid, as he enjoys making his friends and family laugh. He also has a habit of making jokes whenever he is in an awkward situation. Miles has a big interest in hip hop and graffiti cultures, constantly stamping his art around Brooklyn as selfexpression and an expression of love for his city.

allows him to traverse at high velocity while running, as well as traveling while webswinging. Spider-Sense: When danger is present, Miles feels a tingling sensation in his head as a sort of early warning system, allowing him to react quickly. His spidersense offers him a near complete awareness of his surroundings, and in conjunction with his reflexes, allows him to instinctively dodge or counter nearly all attacks.

Wall-Crawling: Miles possesses the ability to cling onto any surface Powers and Abilities using just his fingertips and feet, and can traverse buildings from Superhuman Strength: Miles nearly every angle. possesses the proportionate strength of a spider. Using his Camouflage: Miles can camouflage profound powers, he can fight and himself, making him effectively knock out opponents in battle, or invisible to the human eye. save a friend trapped under rubble. Venom Strike: A form of directed Superhuman Speed: Miles energy that can be conducted possesses superhuman speed that through Milesâ&amp;#x20AC;&amp;#x2122; hands and can be used against an opponent at a distance by conducting it through a material that both Miles and his opponent are touching.

In her universe, Earth-65, Gwen Stacy was bitten by a radioactive spider and spent two years operating as Spider-Woman. At some point, she joined a band as a drummer, she used her powers to save her father, a police officer, but she couldn’t save her best friend, Peter Parker. She stopped making friends to avoid any distractions, and started saving everyone else. Spider-Man Noir is a grungy, black and white version of Spider-Man who is active during the 1930s. He’s a private eye, likes drink egg cream, and fights Nazis. A lot. Peni Parker is a Spider-themed hero from the Spider-Verse who uses a mechanized suit known as SP//dr to fight crime. Not much is known about Peni’s life, except that she

the various setbacks in his life, Peter is left exhausted and jaded as a result, as well as having put on some noticeable weight. Still, while initially reluctant, Peter decides to take the young Miles Morales under his wing to teach him how to be a good Spider-Man. As Peter told Miles, being Spider-Man is not something that comes easy, but is rather something that comes from abandoning doubt and taking a leap of faith. This shows that despite all his setbacks, he is still as selfless in his â&amp;#x20AC;&amp;#x153;superhero workâ&amp;#x20AC;?, willing to accept the responsibilities to the point of sacrifice himself for the sake as others. 9

An invention that fuels the fun and keeps you cool in the summer.

on the Galileo mission to Jupiter, the Mars Observer project, and the Cassini mission to Saturn. He earned multiple awards from NASA for his spacecraft control systems, but his most well known achievement may be his most fun invention: The Super Soaker!

The inspiration hit Lonnie while he was working on an eco-friendly heat pump. “I accidentally shot a stream of water across a bathroom where I was doing the experiment and thought to myself, 12

‘This would make a great gun’,” Johnson said. He considers a robot that he built in high school one of his top three inventions, along with the Super Soaker and his work for the Galileo project.

In Lonnie’s own words, “At that time I was experimenting with a new type of refrigeration system that would use water as a working fluid instead of ozone-destroying CFCs. One evening, I machined a nozzle and hooked it up to the bathroom sink, where I was performing some experiments. It shot a powerful stream of water across the bathroom sink. That’s when I got the idea that a powerful water gun would be fun! But it was months before I did anything about it. I rejoined the Air Force and relocated with my family to a military base in Omaha, Nebraska. I went on to become the first engineer from the Strategic Air Command - which had responsibility for identifying nuclear targets - assigned to test the B-2 Bomber, the Stealth Bomber.

had no idea if the magic I had in mind was going to materialise until all the parts were put together and I was ready to pull the trigger. I gave the plastic gun to my sevenyear-old daughter, Aneka, and watched as she used it to play with the other kids on the airbase. They couldn’t even get close to her with their little squirt guns. I soon found my prototype water pistol was an excellent ice-breaker at social events.

I took it to an Air Force picnic one day and a superior officer, a major, saw it and said, “What is that you got, Johnson?” I said, “This is my water gun, sir.” And he said, “It looks really strange - does it work?” So I turned to him and shot him right between the eyes. After that, the picnic was over. Everybody was throwing cups of water, After I had settled into my new job and cups of beer and it just turned into a big home, I set to work making the parts of free-for-all.” the plastic water gun on a little lathe and milling machine in the basement. I really

Did You Know? Lonnie Johnson currently holds over 100 patents and has over 20 more patents pending on products and processes ranging from toys and consumer products to advanced technology, energy devices, and methods. 13

Sea Otters are dark brown with light fur on their face. They have a short tail, husky profile, and a black triangular shaped nose. Sea otters have webbed feet, fluffy water-repellent fur to keep them dry and warm, and nostrils and ears that close when the go underwater. While floating on their backs, sea otters not only nap, but also use rocks to help them open mussels or other shellfish. They also snack on other aquatic creatures such as sea urchins, crabs, squid, octopuses, and fish.

Sea Otters were hunted to the point of endangerment for their rich and luxuriant fur, which has nearly one million hairs per square inch; the thickest fur of any mammal.

River Otters have sleek, dark brown fur, a long serpentine tail, and a skinny profile. They generally live along rivers, as their name implies, but they are also found near streams and lakes. They run easily on land, and prefer water bordered by woods and with wetlands nearby. Flexing their long bodies up and down, paddling with their webbed hind feet, and using their feet and strong tails to steer, river otters are underwater acrobats. 16

They can stay underwater for up to four minutes! River otters almost always swim in a dog paddle, and rarely swim on their backs. They take advantage of any slippery slope for fun, whether itâ&amp;#x20AC;&amp;#x2122;s a summer slide down a muddy hill or a winter thrill on snow and ice, gliding on their bellies with their front paws by their sides. Sliding and wrestling, belly flopping, and somersaulting, river otters really know how to play! 17

The majority of otters use tools like rocks to smash open clam and mussels to eat, but why do so many always keep this stone with them? Otters actually form attachments to certain stones â&amp;#x20AC;&amp;#x201C; storing them underneath a flap of skin in their armpit when not in use â&amp;#x20AC;&amp;#x201C; and have been known to retain their favourite ones throughout their lives. Many otters even juggle their rocks, with new videos popping up on the internet of them lying on their backs, patting the stones into the air, then catching and rolling them skilfully around their chests and necks. They can even do it with their eyes closed!

The behaviour is likely to be linked to the mammalsâ&amp;#x20AC;&amp;#x2122; use of rocks to detach prey from the seabed and break it open, and recreational juggling may be a playful way of learning how best to manipulate these tools.

Order ahead today with our new app, or find your local McDonaldâ&amp;#x20AC;&amp;#x2122;s Restaurant at www.mcdonalds.com.

Mock version of the publication TIME for Kids. Cover stories feature Spider-Man: Into the Spider-Verse, the inventor behind the Super-Soaker - Lonnie G. Johnson, and Facts About Otters. 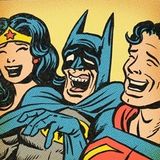