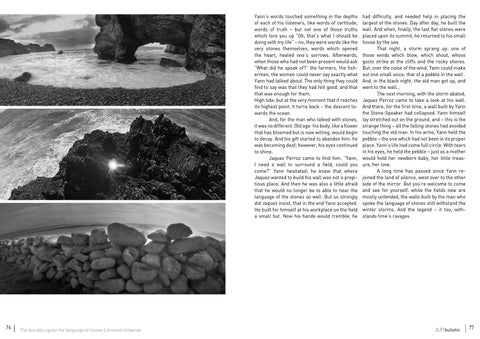 Yann’s words touched something in the depths of each of his listeners, like words of certitude, words of truth – but not one of those truths which tore you up “Oh, that’s what I should be doing with my life” – no, they were words like the very stones themselves, words which opened the heart, healed one’s sorrows. Afterwards, when those who had not been present would ask “What did he speak of?” the farmers, the fishermen, the women could never say exactly what Yann had talked about. The only thing they could find to say was that they had felt good, and that that was enough for them. High tide; but at the very moment that it reaches its highest point, it turns back – the descent towards the ocean. And, for the man who talked with stones, it was no different. Old age: his body, like a flower that has bloomed but is now wilting, would begin to decay. And his gift started to abandon him: he was becoming deaf; however, his eyes continued to shine. Jaquez Perroz came to find him. “Yann, I need a wall to surround a field, could you come?” Yann hesitated; he knew that where Jaquez wanted to build his wall was not a propitious place. And then he was also a little afraid that he would no longer be to able to hear the language of the stones so well. But so strongly did Jaquez insist, that in the end Yann accepted. He built for himself at his workplace on the field a small hut. Now his hands would tremble; he

The boy who spoke the language of stones | Armand Urbaniak

had difficulty, and needed help in placing the largest of the stones. Day after day, he built the wall. And when, finally, the last flat stones were placed upon its summit, he returned to his small house by the sea. That night, a storm sprang up: one of those winds which blow, which shout, whose gusts strike at the cliffs and the rocky shores. But, over the noise of the wind, Yann could make out one small voice: that of a pebble in the wall . And, in the black night, the old man got up, and went to the wall… The next morning, with the storm abated, Jaquez Perroz came to take a look at his wall. And there, for the first time, a wall built by Yann the Stone-Speaker had collapsed. Yann himself lay stretched out on the ground, and – this is the strange thing – all the falling stones had avoided touching the old man. In his arms, Yann held the pebble – the one which had not been in its proper place. Yann’s life had come full circle. With tears in his eyes, he held the pebble – just as a mother would hold her newborn baby, her little treasure, her love. A long time has passed since Yann rejoined the land of silence, went over to the other side of the mirror. But you’re welcome to come and see for yourself: while the fields now are mostly untended, the walls built by the man who spoke the language of stones still withstand the winter storms. And the legend – it too, withstands time’s ravages.

AOrta is a magazine dedicated to analog photography, where the picture is the most important media. AOrta presents wide range of photographic stories: portrait, street, documentary and more... 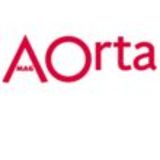