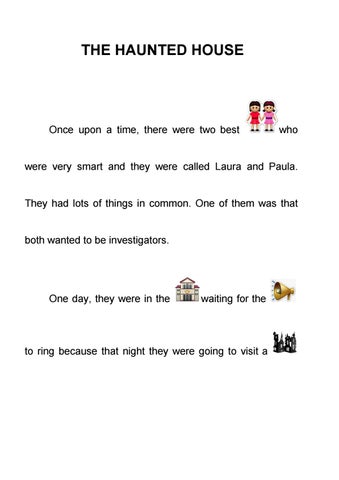 Once upon a time, there were two best

were very smart and they were called Laura and Paula. They had lots of things in common. One of them was that both wanted to be investigators.

One day, they were in the

to ring because that night they were going to visit a

there was in the town or that was what they all thoughtâ&amp;#x20AC;Ś

Everyone said that a

, that night Laura and Paula

met in order to explore

. When it was getting dark,

they knocked on the

but nobody opened it. Finally, they

was opened, so they decided to go into

and asked: Is there anyone living here? But they

did not receive and answer. The house was purple and

had never seen such a big and nice house. Before the first step in, they listened a strange noise. They were very nervous and they asked to themselves: what was that noise? Laura said that she didnâ&amp;#x20AC;&amp;#x2122;t know it, but at the end they

could see that it was just a relaxed.

, so they were more

Suddenly, Paula listened a noise coming from the bedroom upstairs and they thought that it could not be the

, so they said at the same time: the

girls went upstairs slowly, and there they could see a

crying because everyone thought she was an evil

but that was not true. She was a girl with no friends to talk

and play with. Laura and Paula were really

asked her if she wanted to be their friend. The women

surprised asked: really? with a very

. Laura said that it

was a brilliant idea and that they could visit her every day.

Since that day, everyone was visiting the the way the story ended.