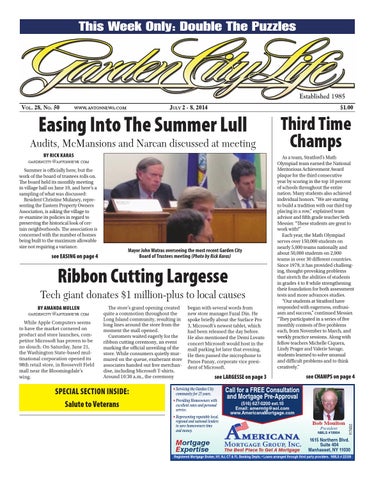 This Week Only: Double The Puzzles

Easing Into The Summer Lull Audits, McMansions and Narcan discussed at meeting BY RICK KARAS

Summer is officially here, but the work of the board of trustees rolls on. The board held its monthly meeting in village hall on June 19, and here’s a sampling of what was discussed: Resident Christine Mulaney, representing the Eastern Property Owners Association, is asking the village to re-examine its policies in regard to preserving the historical look of certain neighborhoods. The association is concerned with the number of homes being built to the maximum allowable size not requiring a variance.

While Apple Computers seems to have the market cornered on product and store launches, competitor Microsoft has proven to be no slouch. On Saturday, June 21, the Washington State-based multinational corporation opened its 98th retail store, in Roosevelt Field mall near the Bloomingdale’s wing.

The store’s grand opening created quite a commotion throughout the Long Island community, resulting in long lines around the store from the moment the mall opened. Customers waited eagerly for the ribbon cutting ceremony, an event marking the official unveiling of the store. While consumers quietly murmured on the queue, exuberant store associates handed out free merchandise, including Microsoft T-shirts. Around 10:30 a.m., the ceremony

SPECIAL SECTION INSIDE: Salute to Veterans

began with several words from new store manager Fazal Din. He spoke briefly about the Surface Pro 3, Microsoft’s newest tablet, which had been released the day before. He also mentioned the Demi Lovato concert Microsoft would host in the mall parking lot later that evening. He then passed the microphone to Panos Panay, corporate vice president of Microsoft.

As a team, Stratford’s Math Olympiad team earned the National Meritorious Achievement Award plaque for the third consecutive year by scoring in the top 10 percent of schools throughout the entire nation. Many students also achieved individual honors. “We are starting to build a tradition with our third top placing in a row,” explained team advisor and fifth grade teacher Seth Messier. “These students are great to work with!” Each year, the Math Olympiad serves over 150,000 students on nearly 5,000 teams nationally and about 50,000 students on 2,000 teams in over 30 different countries. Since 1979, it has provided challenging, thought-provoking problems that stretch the abilities of students in grades 4 to 8 while strengthening their foundation for both assessment tests and more advances studies. “Our students at Stratford have responded with eagerness, enthusiasm and success,” continued Messier. “They participated in a series of five monthly contests of five problems each, from November to March, and weekly practice sessions. Along with fellow teachers Michelle Ciquera, Lindy Prager and Valerie Savage, students learned to solve unusual and difficult problems and to think creatively.”

The Best Place To Get A Mortgage