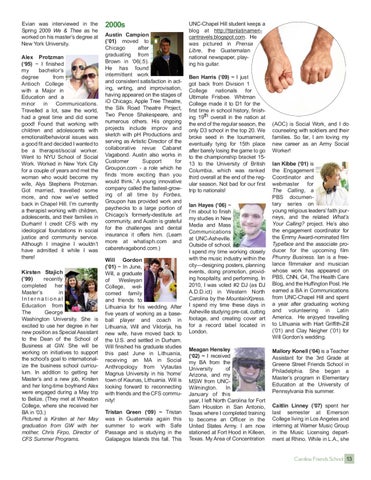 Evian was interviewed in the Spring 2009 We & Thee as he worked on his master’s degree at New York University. Alex Protzman (‘95) ~ I finished my bachelor’s degree from Antioch College with a Major in Education and a minor in Communications. Travelled a lot, saw the world, had a great time and did some good! Found that working with children and adolescents with emotional/behavioral issues was a good fit and decided I wanted to be a therapist/social worker. Went to NYU School of Social Work. Worked in New York City for a couple of years and met the woman who would become my wife, Alys Stephens Protzman. Got married, travelled some more, and now we’ve settled back in Chapel Hill. I’m currently a therapist working with children, adolescents, and their families in Durham! I credit CFS with my ideological foundations in social justice and community service. Although I imagine I wouldn’t have admitted it while I was there! Kirsten Stajich (’99) recently completed her Master’s in International Education from The George Washington University. She is excited to use her degree in her new position as Special Assistant to the Dean of the School of Business at GW. She will be working on initiatives to support the school’s goal to internationalize the business school curriculum. In addition to getting her Master’s and a new job, Kirsten and her long-time boyfriend Alex were engaged during a May trip to Belize. (They met at Wheaton College, where she received her BA in ‘03.) Pictured is Kirsten at her May graduation from GW with her mother, Chris Firpo, Director of CFS Summer Programs.

2000s Austin Campion (’01) moved to Chicago after graduating from Brown in ‘06(.5). He has found intermittent work and consistent satisfaction in acting, writing, and improvisation, having appeared on the stages of iO Chicago, Apple Tree Theatre, the Silk Road Theatre Project, Two Pence Shakespeare, and numerous others. His ongoing projects include improv and sketch with pH Productions and serving as Artistic Director of the collaborative revue Cabaret Vagabond. Austin also works in Customer Support for Groupon.com - a role which he finds ‘more exciting than you would think.’ A young innovative company called the fastest-growing of all time by Forbes, Groupon has provided work and paychecks to a large portion of Chicago’s formerly-destitute art community, and Austin is grateful for the challenges and dental insurance it offers him. (Learn more at whatisph.com and cabaretvagabond.com.) Will Gordon (’01) ~ In June, Will, a graduate of Wesleyan College, welcomed family and friends to Lithuania for his wedding. After five years of working as a baseball player and coach in Lithuania, Will and Viktorija, his new wife, have moved back to the U.S. and settled in Durham. Will finished his graduate studies this past June in Lithuania, receiving an MA in Social Anthropology from Vytautas Magnus University in his ‘home’ town of Kaunas, Lithuania. Will is looking forward to reconnecting with friends and the CFS community! Tristan Green (‘09) ~ Tristan was in Guatemala again this summer to work with Safe Passage and is studying in the Galapagos Islands this fall. This

UNC-Chapel Hill student keeps a blog at http://ttanlatinamericantravels.blogspot.com. He was pictured in Prensa Libre, the Guatemalan national newspaper, playing his guitar. Ben Harris (‘09) ~ I just got back from Division 1 College nationals for Ultimate Frisbee. Whitman College made it to D1 for the first time in school history, finishing 19th overall in the nation at the end of the regular season, the only D3 school in the top 20. We broke seed in the tournament, eventually tying for 15th place after barely losing the game to go to the championship bracket 1513 to the University of British Columbia, which was ranked third overall at the end of the regular season. Not bad for our first trip to nationals! Ian Hayes (‘06) ~ I’m about to finish my studies in New Media and Mass Communications at UNC-Asheville. Outside of school, I spend my time working closely with the music industry within the city—designing posters, planning events, doing promotion, providing hospitality, and performing. In 2010, I was voted #2 DJ (as DJ A.D.D.ict) in Western North Carolina by the MountainXpress. I spend my time these days in Asheville studying pre-cal, cutting footage, and creating cover art for a record label located in London. Meagan Hensley (‘02) ~ I received my BA from the University of Arizona, and my MSW from UNCWilmington. In January of this year, I left North Carolina for Fort Sam Houston in San Antonio, Texas where I completed training to become an Officer in the United States Army. I am now stationed at Fort Hood in Killeen, Texas. My Area of Concentration

(AOC) is Social Work, and I do counseling with soldiers and their families. So far, I am loving my new career as an Army Social Worker! Ian Kibbe (‘01) is the Engagement Coordinator and webmaster for The Calling, a PBS documentary series on young religious leaders’ faith journeys, and the related What’s Your Calling? project. He’s also the engagement coordinator for the Emmy Award-nominated film Typeface and the associate producer for the upcoming film Phunny Business. Ian is a freelance filmmaker and musician whose work has appeared on PBS, CNN, G4, The Health Care Blog, and the Huffington Post. He earned a BA in Communications from UNC-Chapel Hill and spent a year after graduating working and volunteering in Latin America. He enjoyed travelling to Lithuania with Hart Griffith-Zill (’01) and Clay Neigher (’01) for Will Gordon’s wedding. Mallory Konell (‘04) is a Teacher Assistant for the 3rd Grade at Greene Street Friends School in Philadelphia. She began a Master’s program in Elementary Education at the University of Pennsylvania this summer. Caitlin Linney (’07) spent her last semester at Emerson College living in Los Angeles and interning at Warner Music Group in the Music Licensing department at Rhino. While in L.A., she Carolina Friends School 13 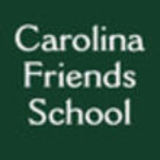 The alumni-themed issue of We & Thee magazine, Carolina Friends School.

The alumni-themed issue of We & Thee magazine, Carolina Friends School.