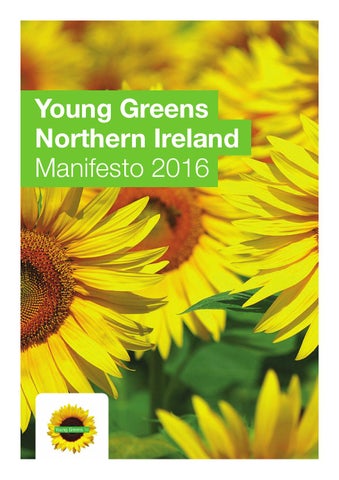 Introduction Young people face immense troubles in our society. We are confronted by unemployment, a lack of public provisions, impending climate change, various institutionalised discriminations, and a political system which refuses to change in response to people’s needs. In Northern Ireland, we often have to leave the country in order to find work, or in search of a less divided society. While the Executive wastes time, money and energy perpetuating sectarianism, austerity, and policies of bigotry and inequality, young people are left without jobs, with increasingly expensive and difficult educations, and without hope. If we can’t make change in the Assembly, we will be wasting the futures of young people across Northern Ireland, and wasting the opportunities for equality, democracy and liberty which are held here. In this Manifesto, we’ll be highlighting some of the Green Party policies which will help young people most, and which young people will be fighting for and living with for the rest of our lives. We’re proud to promote, through these policies: An Equal Society

A People’s Democracy and A Fair Economy

An Equal Society Northern Ireland currently suffers under great inequalities. As campaigners for social justice, the Young Greens will fight against these inequalities, and support measures to make Northern Ireland free from discrimination and marginalisation based on sexuality, race, gender, ethnicity or disability. We also acknowledge the harsh inequalities between rich and poor in our society, and want to see a fairer distribution of wealth; away from the richest in our society, towards the majority. We want to see everyone in our society have the same opportunities to live fulfilling lives. Instead of wasting time, patience and money by setting individuals and communities against one another, NI should reach out to include everyone in a better, fairer future. • Equal Marriage: Extend same-sex marriage to Northern Ireland. • End the Blood Ban: Halt the unnecessary and wasteful ban on blood donations from men who’ve had sex with men. • No Conversion Therapy: Ban the dangerous practice of socalled ‘Gay Conversion Therapy’, as well as banning ‘reparative therapy’ for transgender people of all ages. • Trans Healthcare: Push for the provision of accessible, respectful and inclusive healthcare for transgender individuals of all ages. • Fund Refuges: Provide adequate funding for women’s refuges for survivors of domestic violence.

• Give Women Choice: Extend the 1967 Abortion Act to Northern Ireland, ending the archaic and oppressive healthcare inequality currently in place in NI. • Gender Representation: Introduce quotas to increase female representation in the Assembly and in boardrooms. • Racial Equality: Implement and enhance measures set out in the current Racial Equality Strategy. • Support Minority Languages: Introduce legislation to protect and support minority languages, including British Sign Language and Irish Sign Language. • A Living Wage: No-one should be working for less than what they can live on. Raise the minimum wage to £8.25 an hour.

A Good Education Northern Ireland needs a modern, inclusive, publicly funded education system. Young people currently endure a religiously-divided compulsory school system, which not only helps perpetuate sectarianism, but also divides students through academic selection, and by gender. Our schools, colleges and universities suffer from a lack of funding, and an increasing drive towards marketisation that leaves students undervalued and commodified, being made to use education as a tool for employment, rather than as a means to pursue their interests. For the sake of students and young people, and the future of Northern Ireland, we need to move towards a comprehensive, integrated and coherent education system, away from the money-first policies that are currently being pushed in the sector. We need to stop wasting students’ time with sectarianism, marketisation, and stress, and create a fairer education system. • Integrated, Modern Education: Create a single, publicly funded, non-selective, integrated secular education system. • Fewer Exams: Move away from standardised exams and towards continuous assessment, to support students and provide them with adequate choices. • Relationship and Sexuality Education (RSE): Ensure RSE starts early and is relevant to pupils at each stage in their development and maturity. • Special Educational Needs: Put in place post-18 plan for all young people with special educational needs before they leave the education system on a statutory basis. • Further Education: Value our Colleges of Further and Higher Education and the skills, crafts and trades they teach. • No Fee Rise: Oppose plans to raise tuition fees from £3000 to £9000 in Northern Ireland, and research various forms of funding for higher education. • No Department Cuts: End cuts to entire departments within universities·and investigate the long-term effects of making certain subjects completely unavailable within Northern Ireland. • Maintain EMA: No reduction to EMA provision, and research ways of funding the expansion of EMA.

While climate change threatens everybody in our world, young people will be especially affected by it, unless governments like the NI Executive take action now. We want to see measures to mitigate climate change which simultaneously and necessarily also reduce poverty and inequality, and promote democracy and social justice.

The current model of neo-liberal capitalism has failed young people. We are feeling the burdens of zero-hours contracts, austerity, unemployment, and commodification, often forced to work multiple jobs or make significant cutbacks to be able to afford basic necessities.

• Divestment: Support campaigns to divest from fossil fuel investments, including from universities and all public pensions.

This hardship is unjustifiable in a society as rich as oursmeasures must be taken to transfer wealth back from the richest to the poorest, and to ensure no-one has to live in poverty.

We must transition away from the current wasteful, unequal economy, and create a better society for everyone.

• Fuel & Fuel Poverty: Provide insulation and clean power systems for existing buildings, and ending the inefficiency and profiteering that lead to fuel poverty.

• Living Wage: Raise the minimum wage to £8.25 an hour, so that no-one has to work for less than what they can live on.

A People’s Democracy One of the reasons so many young people leave Northern Ireland is the lack of democratic accountability in Stormont, and the feeling that the Executive refuses to move beyond the politics of hostility which bear increasingly less relevance to the lives of youth here.

• No Zero-Hours: Reform Company Law to end oppressive short-termism present in many jobs on zero-hours contracts. • No Corporation Tax Cut: The Stormont Executive parties want to cut public funds by giving corporations a tax break amounting to an estimated £240 million. This would damage public services, benefits and jobs, and we oppose it. • Fair Rents: Introduce legislation for rent controls and longer tenancies, halting unfair high rents. • Green Jobs: Create jobs in the building sector by building sustainable homes and investing in the skilled workforce needed to build and maintain them, as well as skills in clean power industries.

Democracy is entirely necessary for Northern Ireland to move past the areas in which it is currently wasteful, both through the Assembly and through workplace and educational democracy, representing often-marginalised workers and students. We join the Green Party in calling for:

Through these policies and the vision and principles of the Green movement, we hope to improve conditions for young people in Northern Ireland, and provide hope for disenfranchised youth.

• Votes at 16: Lower the voting age for elections and referenda to 16, giving more young people a say in decisions that affect them.

The Green Party in Northern Ireland stands for a society in which we all flourish together.

We will fight for investment for our public services. We demand equality as of right, whatever your gender, ethnicity, ability or disability, age, economic status, sexual orientation, or other status. We stand for secure, living wage jobs, clean power and a healthy environment for a thriving, sustainable economy.

We stand for the common good. Vote Green in 2016! Representing Young People- Young Green Candidates in 2016

“Having been Chair of Young Greens from 2014 to 2015, I’m now Equalities Officer for the Green Party in Northern Ireland and Environmental and Ethical Trading Officer for Queen’s University Belfast Students’ Union. I’ve been involved in campaigns for equal marriage, integrated education and fossil fuel divestment.”

“I was moved to stand for election as I believe in the Green Party’s vision of grassroots democracy and non-violence. I want to offer a peaceful non-sectarian option for the people of South Antrim.” 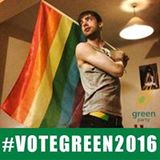