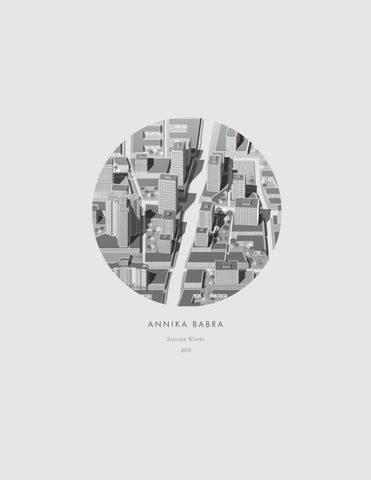 Hello! My name is Annika Babra and I am a third year student currently studying at the University of Waterloo School of Architecture. The following is a curated collection of my architectural, design and personal work that reflect my passion for creation and ambition to convert that passion into meaningful content. 1

a n n i k a EDUCATION

To whom it may concern, Re: Annika Babra Diamond Schmitt Architects (DSA) are very pleased to recommend Annika Babra following her Waterloo co-op work term from September to December 2017 in the capacity of Architectural Student.

During her term at DSA, Annika worked on two projects that I was involved with, including the modernization of a laboratory facility for Environment and Climate Change Canada, in Burlington Ontario, as well as a study for a new Visitorâ&#x20AC;&#x2122;s Welcome Centre for the Ontario Legislative Building at Queenâ&#x20AC;&#x2122;s Park in Toronto. I was also a member of the evaluation team that reviewed her work with the office before she returned to her studies. Annika adapted to the project and team structures and quickly became a valuable team member. For the lab modernization project, Annika focused on the interiors preparing Revit drawings for the Design Development phase and preliminary Construction Document packages. For both projects Annika prepared presentation documents including 3D models, renders, and illustrated layouts. Annika also prepared physical models for ideas needing further study, demonstrating her versatility and proficiency in her approach to design. Annika demonstrated commitment to her work, and was an exceptionally reliable and conscientious employee. She was courteous and co-operative, exhibiting excellent interpersonal skills, so important for establishing productive and agreeable relationships with co-workers. We are confident Annika would be a positive asset to any firm that hires her, and wish her the all the best in her future endeavors. Sincerely,

ANNIKA BABRA - RECOMMANDATION Annika Babra has been employed as an intern at Henning Larsen Architects A/S from January 2017 until April 2017. During her traineeship, she was involved in the following project: Brussels, Belgium - 58,000 m2 Her tasks were: Working on developing a new architectural concept, preparing high quality diagrams for internal meetings and official presentations with the client. Producing 3D Models, sections, diagrams and rendering studies with Rhino, V-ray, Illustrator and Photoshop. Creating and editing several scripts in Grasshopper to facilitate calculations, parametric design components and external faĂ§ade studies. Physical models at various scales for different presentations throughout the project. Drawing and redrawing plans and sections.

Her good Grasshopper abilities was of great help for the design process. Her work was of high quality and efficiency â&#x20AC;&#x201C; and she is most talented when it comes to presentation materials, diagrams and drawings. As an intern she was performing very satisfying and her technique skills were much above the average. Therefore, we are happy to give her our very best recommendations and wishes for the future. Best regards, Anette Karstenskov HR Manager

In 2011, the compromise of Ontario Place laid out the challenges of the shifting focus of Toronto’s habourfront uses and proposed the question of where the city may obtain the greatest benefit of its natural aquatic resource. Flow & Fluidity grasps onto James C. Rose’s notion of water as the key element of spatial definition in landscape architecture. Following the trimmed shore of Lake Ontario, the proposal blends landscape with its programmatic uses, undulating users through a series of transposing public spaces. Four structures are strung along a circular deck, translating from hard to softscapes, where each building hosts and enables water features that programmatically act in the overall system of the aquatic experience. Slicing in and around the decks, the raised buildings shuffle in plan and section, forming pockets of interstitial space filled with aquatic gardens, stepping stones and walkable screens. Acting in parallel to the master plan, the system gradually reconfigures the building to water percentage, as the structures fade to decks that extend marinas out into Lake Ontario’s waters.

â&#x20AC;&#x153;Water is perhaps the only material in landscape which has no definite form as it depends entirely in the materials which surround it. Its fluidity permits an inexhaustible variety and fantasy in arrangement, and it becomes the interlocutor of all other outdoor forms.â&#x20AC;? - James C. Rose, 1938

Blurring the built environment with the natural, Flow & Fluidity aspires to collect and redistribute the potential of Ontario Placeâ&#x20AC;&#x2122;s water features while setting a playful stage for social grounds that experiment with the conventions of permeable landscapes and aquatic architecture.

integrate INTEGRATE explores collective housing as a means of forming a diverse community that shares and prioritizes cultural differences and offers affordable housing for bachelors and families while embracing the unique identity of each resident. The Bloordale neighbourhood provides a site that targets all senses with its diverse selection of foods, crafts and galleries; evident as one trails down its main street. Yet, it continues to gentrify, diminishing its multiplicity of practices while still being the home for current and migrating immigrants of all backgrounds, identities and economic standings. INTEGRATE proposes a centre that is aware and exhibits these differences through accommodation with flexible communal spaces for new residents to develop cultural appreciation and connections for themselves, to their neighbours and to the community.

Have a mother tongue besides English

Were born in another country

Embrace the diversity & growth of the community

The building proposes an alternate form to the typical terrace typology, in which the smooth concrete faรงade disintegrates into arranged terraces and kitchens that shuffle as the building steps back, opening up to the central courtyard and binding itself up once again as the form is duplicated. These blocks focus on the courtyard, prioritizing the shared space and views of communal activities. The intimacy of unit to unit interaction is expanded between floors with split living and dining spaces of double heights that span to face the bordering street. Offering a constructed path across the lot on the first two floors, the second floor acts as a flexible theatre space, facing out towards Lansdowne Subway Station.

United through shared spaces that embrace daily interaction and customization, INTEGRATE aims to allow residents to be able to connect to their cultural roots while consequentially being exposed to the customs of their neighbour and the diverse Bloordale community.

queen west library On a site abundant with diversity, Queen West Library aims to exhibit the nature of the community by promoting the culture and creativity that the street thrives upon. The library is defined by a large auditorium at its front, overlooking the street and acting as an invitation to the public to join communal events and discussions. With the auditorium at its core, stairs wrap the extents of the structure allowing a spiral of circulation through each major programmatic moment. The progression upwards brings users from a ground floor of public reading spaces to quieter study levels above, ending the journey with rooftop seating. The architectural forms follow this shifting circulation to accommodate the pace of each change of program, as an open childrenâ&#x20AC;&#x2122;s sector gives way to smaller study areas that in turn lead to private administration offices. Beyond a library, the space hopes to act dynamically as per the needs of the community, to become a host of connection for the city.

tensile - ly bound Tensile-ly Bound explores a bodily experience mimicked by artificial structures, emulating the expansion of the human body in relation to our internal functions. The bonded form hopes to mirror this relation and create a holistic experience that describes abiogenesis, the creation of an organic reality from abiotic components. A modular surface of elastic cells attempt to expand and contract based on the presence of living forms. The fundamental shape of the cells are triangles, that connect at each outer corner, in turn creating a strong hexagonal pattern, with the ability to hold another hexagonal pattern above and below it, reinforcing the pattern and stability of the ‘fabric’. Heat activated sensors trigger the expansion of the skin, rigged by a pulley system. Thus, materials of the cells alternate between the dynamic and static, where the bands provide the elasticity of the form and the paper creates shade upon expansion, but the skin appears porous while contracted. The ‘fabric’ is able to breathe, stretch and provide an immersive experience for users within the space it envelopes.

green-shift green-shift takes on the role of developing the Jane-Finch area into a vibrantly mixed community, in order to accommodate the anticipated growth accompanied by new Finch West Light Rail Transit (LRT) stops. The area was planned in the 1960s with intentions to provide social housing in a reformed, modern urban setting. However, the area has suffered for the past couple decades due to insufficient amenities, high crime and poverty rates as well as poor overall maintenance. In 2001, it was deemed as one of Torontoâ&#x20AC;&#x2122;s 13 Priority Neighbourhoods. green-shift aims to transform the current fabric into a dynamic environment while maintaining the emergetic forces that define the area and provide for the broader community. green-shift reorganizes current planning, creating a central core around the Jane-Finch LRT stop and emanating out into a series of mixed environments. Densification starts at the center, intermingling residential towers with retail podiums lining the main streets of Jane and Finch while ebbing out to low-rise institutional buildings and RGI townhomes. An east to west green strip connects the open Hydro Corridor to the Greenbelt on the other side, fragmenting the site into finer divisions. New streets and pedestrian paths follow a manifesto of focusing on the short blocks of these divisions, holding true to Jane Jacobâ&#x20AC;&#x2122;s notion of pedestrian permeability, an idea followed throughout the entirely of the site.

Diamond and Schmitt Architects is an award-winning Canadian firm established in Toronto since 1975. The multidisciplinary firm has 3 offices; in Toronto, Vancouver and New York City. It is internationally recognized for its design excellence in buildings across the globe and notably within Canada, majorly working on public, institutional and cultural buildings that have shaped the modern urban fabric of Toronto. Within my 4 months, I had the opportunity to work on the schematic design for a Visitor’s Centre for the Legislative Assembly of Ontario in the historic site of Queen’s Park; I was able to research precedents, take part in bi-weekly meetings and create a book of photos, diagrams and illustrations for the proposed options. I also aided in design development and construction documents for the renovation of the Canadian Centre for Inland Waters, drawing out details, tesing models and proposing new interior features, including a shelving system and a parametric ceiling. • • • • •

Thank you for your time!