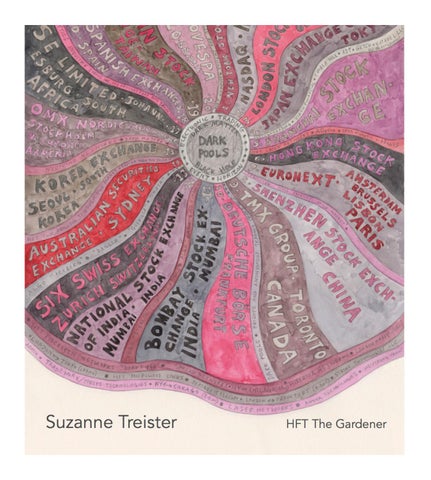 Hillel Fischer Traumberg (b. 1982 London), a high frequency algorithmic trader in the city of London, experienced a semi-hallucinogenic state one day whilst staring fixedly at the High Frequency Trading graph patterns illuminating the bankâ&#x20AC;&#x2122;s trading room walls. After several such experiences Traumberg got the idea of experimenting with psychoactive drugs and eventually managed to procure some online from a supplier in Zurich. The influence of the drugs, which he took at first in small doses, began to alter Traumbergâ&#x20AC;&#x2122;s perceptions of the trading algorithms he was working with and he gradually began to feel more at one with them as if he actually inhabited the code. He felt himself becoming part of an infinite swirl of global data as the algorithms became transformed in his mind into technicolour fluxing entities, travelling through and beyond his body in holographic space and time. In his spare moments Traumberg started researching the ethnopharmacology of a hundred or so known and documented psychoactive plants across the world, exploring their historical ritual uses and functions in shamanic healing, in magic, religion, sex, divination, protection, modern medicine and in mental enhancement. He became curious about their chemical composition and studied the compounds in each plant which produce the psychoactive effects. He made lists of the active substances, the alkaloids, and wondered whether inserting their molecular formulae into the codes of his trading algorithms would have a similar effect as the drugs themselves have on the human brain, i.e. whether they would in any way enhance or alter the trading performance of the algorithms. Inevitably when the presence of these rogue algorithms came to light at the bank his bosses traced the problems back to Traumberg. Suspecting a nervous breakdown due to the stresses of the job they released him from his employment. With his substantial savings Traumberg moved to a penthouse apartment on the other side of town at Embassy Gardens, a New York Meatpacking District styled riverside complex recently constructed around the new U.S. Embassy in Nine Elms on the southside of the Thames. From his apartment Traumberg had a 360 degree view which took in the US Embassy, the New Covent Garden Flower Market, the green glass edifice of the MI6 building just beyond St George Wharf, the Houses of Parliament and the city of London further to the east. Most mornings Traumberg went for a stroll around his new neighbourhood.

From the local flower market he built up a collection of plants with supposed psychoactive properties which soon filled his living room shelves and penthouse roof garden. One day, staring at the list he had compiled of the botanical names of his plants he decided to conduct a gematria experiment. Using his rudimentary knowledge of the Hebrew language, gained during his school days, Traumberg made numerical experiments translating the botanical names of psychoactive plants into phonetic Hebrew and then deriving their numerical equivalents. He discovered that, for example, Mandrake, (Mandragora officinarum) had a gematria value of 970. Adding together the 9 the 7 and the 0 made 16 and then adding the 1 and the 6 made 7. A copy of the Financial Times on his desk prompted him one day to check the numerical equivalents of the plants against the top companies in the FT Global 500 index. Traumberg found that the two final numbers for Mandrake, 16 and 7, corresponded to Petro China and Wells Fargo which came 16th and 7th respectively in the FT index. Traumberg compiled a gematria chart of all the plants, listing their botanical names alongside their global companies equivalents. He then developed an algorithm that would trawl the internet collecting images of the groups of psychoactive plants which corresponded to each company. Inspired by the botanical illustrations of Ernst Haekel, which he had loved as a child, Traumberg reprogrammed the algorithm to collate and transform these images into works with a similar style and format. Stimulated by the artistic results he recalled a summer holiday he’d taken in 2013 to Venice with some banker friends. One of them, an avid art collector, had dragged them around an exhibition in a park on the lagoon and he had seen masses of weird coloured drawings in one of the many buildings, which were said to have been made by artists who had received no formal training. This brought to mind a work trip several years previously, to UBS in Bern, Switzerland. The Swiss bank had taken them on a free afternoon to a museum where he had seen works by a supposed madman. He looked it up online, the guy was called Adolf Wölfli. Traumberg, who by now had become obsessed with the forms and structures of the plants themselves, as well as all the data he was collating about them, began,

under the influence of the various psychoactive drugs in his possession, to spend his afternoons making a vast series of drawings. Under the hypnotic influence of Wölfli he transformed himself into an ‘outsider’ artist. He developed a fantasy of himself as a kind of techno-shaman, transmuting the spirituality of the universe and the hallucinogenic nature of capital into new artforms. One day a banker friend, the art collector from the Venice trip, paid him a social visit and was astonished to see Traumberg’s new apartment filled with strange plants and drawings. On a subsequent visit he took along a top art dealer who invited Traumberg to show the works at his London gallery. Traumberg, in the throes of a hallucinogenic trip, agreed to the offer. Later in the year the dealer put on an exhibition and all the works were sold out, primarily to bankers, oligarchs and to some of the corporations featured in the works. Traumberg was unaffected by this turn of events, his primary concern being to discover whether the realities opened up to him by psychoactive plants were arbitrary hallucinations or whether they indeed, as many had suggested, lifted the brain’s filter, opening the portal to what lay beyond our everyday perceptions of reality necessary for survival; the holographic universe perhaps? Traumberg spent his days wondering whether his experiences were real or imaginary, whether they originated in his unconscious or came from another dimension. He wondered about the nature of consciousness and whether it existed outside the brain/body. Was consciousness perhaps the ultimate organising principle of the universe, merely reflected by the brain in a limited and distorted way? Was consciousness maybe a giant algorithm? And where was the universe in this algorithm? Based on his experience with high frequency trading algorithms Traumberg decided to develop a new algorithm to test these ideas. A brain thinking about a brain. Consciousness thinking about consciousness. An algorithm trying to return information about another algorithm. A brain trying to develop an algorithm about an algorithm about a universe of which it is a part or perhaps a whole or perhaps neither? HFT The Gardener -----------------------------------------------------------------High Frequency Trading (HFT) Hillel Fischer Traumberg (HFT) (en. ToPraise Fisherman DreamMountain)

From Cannabis sativa to Carnegiea gigantea

From Panaeolus cyanescens to Hyoscyamus niger

From Tabernaemontana to coffeoides to Datura stramonium

From Salvia divinorum to Mandragora officinarum

From Datura innoxia to Calea zacatechichi

Rank 19: Pfizer - US - Pharmaceuticals and biotechnology

The Holographic Dimensions of Consciousness