Design by V. Febrer based on Francisco de Goya, Duchess of Alba, 1797. Oil on Canvas.

After studying with Maria Morales at the Peabody Institute in Baltimore for nine years, dancer Anna de la Paz went to Madrid to continue her professional studies with Mariemma, La Tati, Tomás de Madrid, María Magdalena and Pedro Azorín. In the United States, she studied ballet and modern dance at Towson University where she obtained her Bachelor of Fine Arts in Dance Performance, as well as a Bachelor of Arts in Spanish Literature. She further refined her knowledge of Spanish dance with Carmen de Vicente in Alexandria, VA as well as at the University of New Mexico's celebrated flamenco and Spanish dance department. In NYC, Anna has worked with Gabriela Granados, José Molina, La Meira, Mariano Parra and Jerane Michel.

She has performed at The Kennedy Center as well as Carnegie Hall with the American Bolero Dance Company. With ABDC, she performed in the critically acclaimed production, Olé! Olé! Fin de Siglo, and continues dancing with the company today. She performs as a freelance artist in Rockland County, dancing in theaters, schools and libraries.

Anna Tonna combines a distinguished career as an opera singer with her dedication to the music of Spain and Latin America, a natural consequence of her roots and her affinity for Hispanic culture. A graduate of Mannes College of Music, Tonna had her Lincoln Center debut in New York’s Alice Tully Hall in the Mascagni opera Guillermo Ratcliff with the Teatro Grattacielo company in 2004. She has also sung with Opera Illinois, New Jersey State Opera, Bacau State Orchestra (Romania), Connecticut Grand Opera, New York Grand Opera, Teatro Nacional de Santo Domingo, and New Rochelle Opera. Recent highlights among her recitals in the United States and Spain are her debut in the Auditorio Nacional de Madrid, and her debut solo recital at the Casals Festival in March as well as her performance at Lincoln Center in the opera Il re by Mascagni.

She has been honored by numerous organizations and competitions, such as the Liederkranz Foundation in New York, Gerda Lissner Foundation, Marjorie Lawrence International Competition, Teatro Grattacielo, National Opera Association, Violetta Dupont/Opera at Florham and New Jersey Verismo Association Competition. As a 20072008 Fulbright Scholar to Spain, she researched the works for voice and piano by Spanish composer Julio Gómez at the Juan March Foundation in Madrid; she can be heard on discographic label Sello Verso in the disc “The Songs of Julio Gómez.”

Australian Rupert Boyd is acclaimed as one of the most talented guitarists of his generation. He has been described by The Washington Post as “truly evocative”, and by Classical Guitar Magazine as “a player who deserves to be heard.” He has performed throughout North America, Europe and Australia, including at New York’s Carnegie Hall, the 92nd Street Y, Merkin Concert Hall and the Cathedral of St. John the Divine (the world’s largest gothic cathedral). His solo CD Valses Poéticos received the following review in Soundboard, the quarterly publication of Guitar Foundation of America: “Boyd’s playing is beautifully refined, with gorgeous tone . . . musically and technically flawless . . . [the Granados is] one of the best recorded performances of this work on guitar.”

Reception in the Sorolla Gallery

accompanying instrument is the guitar, although the piano is also found. In seguidillas of this period, a solo voice is usual, although some are duets or trios.

Songs from Andalucía became very popular in the 18th and 19th centuries, not only in Spain but throughout Europe as well. The vogue for Spanish “song” can be attributed in part to the discovery of Spain as a destination for tourists from Italy, France and England. These 18th-century tourists would visit places like the Mezquita in Córdoba and the Alhambra in Granada, thereby coming into contact with the music of the region. Also, during the dictatorship of Fernando VII, many of Spain’s prominent composers left the country and took up residence abroad, thus helping to popularize their musical style throughout Europe.

Escuela Bolera The Escuela Bolera is a classical genre of Spanish dance that originated in the 18th century, with roots in popular regional dances, flamenco and classical ballet. It was born at a time when popular dances began to be seen, not only in the royal courts and the homes of the rich and noble, but also in theaters and, as a consequence, the technique became more intricate and spectacular. During this period, there was a mutual exchange of ideas between the different schools of ballet and the Escuela Bolera and their influence on each other is still evident today. The style of the Escuela Bolera involves circular arm movements, beaten steps (similar to Basque dances), and they have elevation, or leaps and jumps. Castanets are also an integral part of this style of dance. The Olé de la Curra is heavily influenced by regional dances. “Olé” is a type of dance from the city of Jerez de la Frontera, in Andalucía (south of Spain), while the term “Curra” is believed to have been derived from the name of a dancer. It is usually a solo dance and, more than in any other Spanish dance, there is a need for flexibility and fluidity. The “Zapateado de María Cristina” was named after the Queen, María Cristina, a forceful woman who founded Madrid’s Conservatory of Music, whose interest in the arts was rewarded in this dance. The Sevillanas, or Seguidillas Sevillanas, give life to festivals, parties and cafes. It is a couple dance although it was first performed as a solo. There are various types of Sevillanas, but the Sevillanas Boleras are known for their short bursts of music, jumped and beaten steps, and have three verses. Anna de la Paz 18th-century Spanish “Song” Although there were strong influences from France, such as the minué, and from Italian Neapolitan opera, the 18th-century Spanish “song” played at the botillerias, verbenas, meriendas, comidas campestres and other popular pastimes of the era was derived from popular dance rhythms of the time such as la seguidilla, la Tirana and the Andalusian song. The Spanish “song” at this time is the basic element of Spanish music, and was in constant exchange with the theater music of the day known as la tonadilla. The “song” was well received throughout all social classes. Within this genre, a nationalist or castizo aesthetic asserts itself and it becomes an important aspect of Spanish social life. The preferred

The rhythms and melodies of southern Spain have provided inspiration for Spanish composers and foreigners alike; one well-known example is Georges Bizet who composed the opera Carmen. The Andalusian song features archetypal characters such as the bandoleer who, with his chant of personal freedom, became a celebrated figure among early 19th-century romantics such as Berlioz, Liszt and George Sand. The most famous canción andaluza of the late 18th century was “Yo que soy contrabandista,” by tenor and composer Manuel García (creator of Rossini’s Almaviva in Il barbiere di Siviglia) which was sung by both García and his daughter, the opera diva María Malibrán. Most of the Andalusian songs are associated with dances such as la zambra, zapateados, polos and the zorongo. Yet another genre, a lullaby called la nana andaluza, uses texts that come from the Andalusian gypsy tradition. Our program tonight gathers together some of the most famous Spanish composers of late 18th- and early 19th-century Spain, among them the aforementioned Manuel García (1775-1832), Fernando Sor (1778-1839), from whom the Duchess commissioned songs for her entertainment, and Ramón Carnicer (1789-1855), who provides a link between the roccoco and early romantic styles. The seemingly anachronistic inclusion of Enrique Granados, Isaac Albéniz and Manuel de Falla in the program can be justified by the fact that the music and lineage of this nationalist castizo style became the musical inheritance of these internationally renowned Spanish composers of the late 19th and early 20th centuries. Granados’s fascination with Goya and his majas is no secret; Albéniz’s contributions of pieces such as his Córdoba are founded on Spanish dance rhythms that date back to the 18th century. Although an original composition, Falla’s “Nana,” from his Siete canciones populares españolas, has the rhythm, air and feel of a traditional Andalusian lullaby, one that may well have been sung by our Duchess to lull her daughter María de la Luz to sleep. Anna Tonna 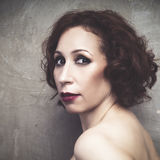