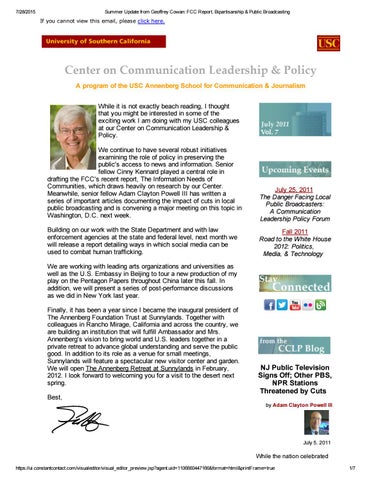 If you cannot view this email, please click here.

Center on Communication Leadership & Policy A program of the USC Annenberg School for Communication & Journalism While it is not exactly beach reading, I thought that you might be interested in some of the exciting work I am doing with my USC colleagues at our Center on Communication Leadership & Policy.   We continue to have several robust initiatives examining the role of policy in preserving the public's access to news and information. Senior fellow Cinny Kennard played a central role in drafting the FCC's recent report, The Information Needs of Communities, which draws heavily on research by our Center. Meanwhile, senior fellow Adam Clayton Powell III has written a series of important articles documenting the impact of cuts in local public broadcasting and is convening a major meeting on this topic in Washington, D.C. next week.   Building on our work with the State Department and with law enforcement agencies at the state and federal level, next month we will release a report detailing ways in which social media can be used to combat human trafficking.   We are working with leading arts organizations and universities as well as the U.S. Embassy in Beijing to tour a new production of my play on the Pentagon Papers throughout China later this fall. In addition, we will present a series of post­performance discussions as we did in New York last year.   Finally, it has been a year since I became the inaugural president of The Annenberg Foundation Trust at Sunnylands. Together with colleagues in Rancho Mirage, California and across the country, we are building an institution that will fulfill Ambassador and Mrs. Annenberg's vision to bring world and U.S. leaders together in a private retreat to advance global understanding and serve the public good. In addition to its role as a venue for small meetings, Sunnylands will feature a spectacular new visitor center and garden. We will open The Annenberg Retreat at Sunnylands in February, 2012. I look forward to welcoming you for a visit to the desert next spring.   Best,

While the nation celebrated https://ui.constantcontact.com/visualeditor/visual_editor_preview.jsp?agent.uid=1106660447166&format=html&printFrame=true

the holiday weekend of independence, New Jersey's public television network signed off for the last time and many other PBS stations around the US may soon follow suit.The reason: cuts in funding from state governments across the country.   The final New Jersey newscast on NJN was Thursday night. At its end, viewers saw a simple sign, "New Jersey Network. April 5, 1971 ­ June 30, 2011." As of that night, 130 employees were immediately laid off.   New Jersey public television transmitters will now carry programming from WNET in New York City, under a plan that the state legislature tried unsuccessfully to block in late June.   Read Powell's complete post on the CCLP Blog.

Landmark FCC report highlights CCLP research CCLP senior fellow Cinny Kennard was a key member of the FCC working group that led research, conducted interviews and drafted the groundbreaking report The Information Needs of Communities: The changing media landscape in the broadband age, which was released in Washington D.C. in June.     Kennard (pictured) and her research team investigated the evolution of television news by looking at trends and changes in the work force, adjustment to the forces of technology and business viability of the news.   The report also draws on research by CCLP director Geoffrey Cowan and senior fellow David Westphal, with several citations to their 2010 report, Public Policy and Funding the News .   "There has never been a more exciting time than this broadband age to achieve our Founding Fathers' vision of a free democracy comprised of informed and empowered citizens," said FCC chairman Julius Genachowski. "As the report identifies and celebrates the potential of new communications technologies, it also highlights important gaps that threaten to limit that potential and harm communities." > more   On June 13, 2011, USC Annenberg hosted a forum with representatives from the FCC at the University of Southern

Jeremy Curtin served until December 2009 as coordinator of the Bureau of International Information Programs in the  U.S. State Department , where he was the government's senior public diplomacy officer. During more than 30 years in the Foreign Service, he specialized in international public affairs and strategic communications. He held a number of positions in Washington with the U.S.

Information Agency, the National Security Council and the State Department.

CCLP offers courses in partnership with The New York Times   The New York Times Knowledge Network and USC have joined forces to establish a new online continuing education program. As part of this new program, CCLP is offering courses in journalism and public relations. Led by Mark Latonero, CCLP's director of research and instruction, courses are taught by CCLP instructors with journalists from The New York Times.    A series of six courses in journalism for high school students will be offered beginning in October 2011. Students may enroll in any of the two week courses taught by Latonero and Larry Wilson, an award­ winning journalist, editor and highly­rated USC Annenberg lecturer, with participation by journalists from The New York Times.   CCLP will also be offering a course in crisis communications management taught by veteran media strategist and USC Annenberg adjunct professor Jonathan Wilcox. This course is designed to help communication leaders manage the shifting landscape in both legacy and new media. > more

Future of News: Columbia Journalism School adds CCLP study to Knight Case Study Initiative   Describing it as "a powerful new case on the business of media," Columbia Journalism School features CCLP research on the Long Beach Post as a new case study in its Knight Case Studies Initiative.   The Jury is Out: The Long Beach Post and Online Local News, is authored by CCLP executive­in­residence Jeffrey S. Klein and research associate María J. Vázquez. It is available as a teaching resource for journalism educators and students throughout the country.   "Students can discuss the variety of challenges facing a news start­ up and debate the merits of a for­profit business model," writes Kirsten Lundberg, director of the Knight Case Studies Initiative. "They will gain insight into the realities of journalism entrepreneurship, the competition in local media markets, and the options for community outreach."  > more

More than a year after Geoffrey Cowan and David Westphal released Public Policy and Funding the News, their work continues to shape public debate about government funding of news.    In March, the Association for Education in Journalism and Mass Communication cited the CCLP study in their call for Congress to maintain federal funding of public broadcasting.   "As research also points out, commercial media enterprises have ­­­­ for most of this country's history ­­­­ received federal assistance in the form of discounted postal subsidies and tax breaks, for instance. Yet, Americans trust public media more for relevant, complete news," AEJMC's Presidential Advisory Council writes in a statement. "A recent report by researchers at the USC Center on Communication Leadership and Policy suggests that increased funding for public broadcasting might be advisable."   In addition, Cowan & Westphal authored a chapter in a new book edited by Robert McChesney and Victor Pickard, Will the Last Reporter Please Turn Out the Lights: The Collapse of Journalism and What Can Be Done to Fix It.  > more

From technology's impact on public diplomacy to the role of biography in constructing presidential legacy, CCLP's diverse range of research projects and policy initiatives were presented at the Policy Research Roundtable in April. Convened by director Geoffrey Cowan and moderated by research director Mark Latonero (left), the campus event offered students and faculy the opportunity to learn more about CCLP projects and areas of engagement.   "We believe that we have an obligation to produce research that makes a difference," Cowan explained to the standing­room only audience. "This roundtable is our opportunity to share with USC students and faculty our ongoing efforts to produce communication research that shapes public policy."   The discussion featured a presentation focusing on communication technology and social change, specifically in the area of human trafficking. Latonero, who is spearheading the human trafficking initiative, oversees a team of researchers who are compiling https://ui.constantcontact.com/visualeditor/visual_editor_preview.jsp?agent.uid=1106660447166&format=html&printFrame=true

Forum examines bipartisanship in U.S. politics      CCLP convened scholars, policymakers and journalists in New York City in April to discuss prospects for bipartisan cooperation in Congress and the Obama administration. Director Geoffrey Cowan led a conversation with senior fellow Dan Glickman (left) and Harvard Institute of Politics director Trey Grayson (center) that covered a range of issues, including trends in media coverage of politics, the conduct of elected representatives, and the role of money in the political arena.   Glickman described several factors contributing to the current state of dysfunction in American politics. Money is a significant obstacle to political progress, he observed, as congressional leaders are too paralyzed by indebtedness to donors with particular interests to take any action. Additional factors impeding progress include media partisanship, reduced social contact across party lines, a reluctance to demonstrate leadership, and an atmosphere that treats every conflict, no matter the size, as tantamount to war.   The conversation also touched on examples of congressional leaders successfully reaching across party lines, with Trey Greyson recent example of cooperation that should have highlighting President Obama's  bipartisan budget commission as a received more attention.   In closing remarks, CCLP board co­chairman Mickey Kantor (left), who served as U.S. Trade Representative and Secretary of Commerce during the Clinton administration, offered a reminder that this is not the most divided period in the country's history. He encouraged guests to leave the event with optimism about the future.     > View photos in the CCLP collection on Flickr

Personnel updates   Joining the CCLP team for Summer 2011 is law intern Tala Mohebi, a second year student at Harvard Law. She holds a Master's in Public Diplomacy from USC Annenberg and earned a B.A. in International Political Economy from UC Berkeley. While at Berkeley she focused on sexual health policies in the Middle East and North Africa. At USC, she served as Editor­in­Chief of Public Diplomacy Magazine, covering trends and best practices in public diplomacy. > more    Senior fellow Morley Winograd (pictured) and co­ author Mike Hais published a Kindle Single, Headwaters of the Arab Spring. Winograd and Hais explain how intertwined forces of technological and generational change, fueled by a hunger for a better future continue to be an underlying source of the institutional instability in the Middle East. The events of revolution known as the Arab Spring are destined to reshape the entire region and undermine institutions and leaders in every corner of the world.   > more     The Aspen Institute announced the appointment of senior fellow Dan Glickman as executive director of its Congressional Program. "The Institute could not have found a person better suited to assume leadership of this remarkable program than Dan Glickman," said Aspen Institute President and CEO Walter Isaacson. CCLP congratulates Glickman on his new role!     Faculty fellow and USC Annenberg communication professor Stacy Smith released a major report examining Hollywood films as they reflect diversity within American society. Smith examined content creators' perceptions, attitudes, and beliefs about gender equality and the construction of and/or resistance to representation of female characters in family films. Changing the Status Quo: Industry Leaders: Perceptions of Gender in Family Films includes data from Smith's Media, Diversity and Social Change initiative.