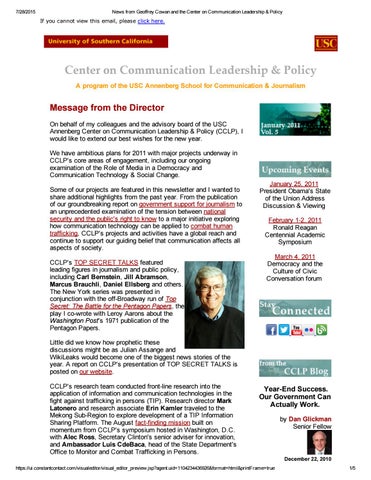 If you cannot view this email, please click here.

Message from the Director   On behalf of my colleagues and the advisory board of the USC Annenberg Center on Communication Leadership & Policy (CCLP), I would like to extend our best wishes for the new year.   We have ambitious plans for 2011 with major projects underway in CCLP's core areas of engagement, including our ongoing examination of the Role of Media in a Democracy and Communication Technology & Social Change.    Some of our projects are featured in this newsletter and I wanted to share additional highlights from the past year. From the publication of our groundbreaking report on government support for journalism to an unprecedented examination of the tension between national security and the public's right to know to a major initiative exploring how communication technology can be applied to combat human trafficking, CCLP's projects and activities have a global reach and continue to support our guiding belief that communication affects all aspects of society.    CCLP's TOP SECRET TALKS featured leading figures in journalism and public policy, including Carl Bernstein, Jill Abramson, Marcus Brauchli, Daniel Ellsberg and others. The New York series was presented in conjunction with the off­Broadway run of Top Secret: The Battle for the Pentagon Papers, the play I co­wrote with Leroy Aarons about the Washington Post's 1971 publication of the Pentagon Papers.   Little did we know how prophetic these discussions might be as Julian Assange and WikiLeaks would become one of the biggest news stories of the year. A report on CCLP's presentation of TOP SECRET TALKS is posted on our website.   CCLP's research team conducted front­line research into the application of information and communication technologies in the fight against trafficking in persons (TIP). Research director Mark Latonero and research associate Erin Kamler traveled to the Mekong Sub­Region to explore development of a TIP Information Sharing Platform. The August fact­finding mission built on momentum from CCLP's symposium hosted in Washington, D.C. with Alec Ross, Secretary Clinton's senior adviser for innovation, and Ambassador Luis CdeBaca, head of the State Department's Office to Monitor and Combat Trafficking in Persons.

Looking ahead, we are partnering with USC's School of Policy, Planning, and Development and the Reagan Library to present the 2011 USC Ronald Reagan Centennial Academic Symposium. The symposium features a new report by senior fellow Richard Reeves and a panel organized and moderated by faculty fellow Tom Hollihan. It also includes a discussion we organized that will be moderated by Tom Brokaw with Peggy Noonan, Lou Cannon, Douglas Brinkley and Pete Wilson.    In coming months, we will be publishing new work by senior fellow Jeremy Curtin, who is examining the role and practice of American diplomacy in the new communication environment; a case study by executive in residence Jeffrey S. Klein on lessons learned from a community news startup in Long Beach, Calif.; and a report by senior fellow Cinny Kennard as part of the FCC's Future of Media initiative.    Congratulations are due to CCLP advisory board member Thomas Nides, who took office in January as Deputy Secretary of State for Management and Resources. You can read more about his appointment and other personnel updates in the last story of our newsletter.   In addition to continuing to contribute to CCLP's important work, I will be serving as the inaugural president of the Annenberg Foundation Trust at Sunnylands. At Sunnylands, we are building a venue for retreats of international significance, thanks to the visionary leadership and generosity of the late Walter and Leonore Annenberg. Important synergies are developing between Sunnylands and CCLP and I look forward to keeping you posted as we embark on this new enterprise.    Warm regards,             Geoffrey Cowan

It is amazing what a deadline can do to focus the hearts and minds of our government. In the final days of the lame­duck session, Congress passed a major piece of tax and economic stimulus legislation; the repeal of 'Don't Ask, Don't Tell'; and the landmark START Treaty on nuclear weapons reduction. Maybe one of the lessons of this is to shorten the congressional session to one month

per year.   To read the full article by senior fellow Dan Glickman, visit the CCLP Blog.

Faculty Fellow Sasha Anawalt is director of  USC Annenberg Arts Journalism Programs. A professor of the USC Annenberg, she founded the masters' degree program in Specialized Journalism (The Arts) in 2008 and directs the

In a year­end report, Ambassador Luis CdeBaca, director of the State Department's Office to Monitor and Combat Human Trafficking, cited CCLP's Technology and Trafficking in Persons (TIP) working group as a significant development in the

Department's work to combat global human trafficking. CCLP launched the group in June with Alec Ross, Secretary of State Clinton's Senior Advisor for Innovation.   Last month, Investor's Business Daily also highlighted CCLP's innovative research examining ways to employ technology to monitor and combat human trafficking in the Mekong Sub­region.   Research director Mark Latonero and senior fellow Jeremy Curtin are now working with foundations to identify and develop new projects that could facilitate the work of NGOs and law enforcement engaged in combatting human trafficking. In addition, Latonero is beginning a major new project with the Annenberg Program in Online Communities to study the ways social networks are being used to facilitate human trafficking in California and the Pacific Rim.   For more information about the Annenberg TIP Project, click here.

To view the full schedule or to register, click here.  > more https://ui.constantcontact.com/visualeditor/visual_editor_preview.jsp?agent.uid=1104234436926&format=html&printFrame=true

As part of CCLP's examination of the Role of Media in a Democracy, the 2010 James L. Loper Lecture in Public Service Broadcasting featured a firsthand account of the changing roles and responsibilities of journalists with a speech by NPR's President and CEO Vivian Schiller. In the wake of the revolutionary upheavals in the media industry, Schiller argued that concrete, on­the­ground reporting was needed now more than ever. "Just how NPR will adapt to all this change and transform itself will be a fascinating and challenging journey. But what cannot change, and will not change, is NPR's commitment to original independent reporting ­ with high standards, fine craftsmanship and integrity," Schiller said.

Schiller's November 18, 2010 speech held at USC's Town and Gown drew students, faculty and media industry leaders. Her speech also marked one of the NPR chief's first major public addresses following the controversial firing of commentator Juan Williams. The James L. Loper Lecture in Public Service Broadcasting is presented in partnership with the Office of the Dean at the USC Annenberg School for Communication & Journalism. The series, inaugurated in 2005, honors Loper, a longtime USC Annenberg professor and his four decades of service to public broadcasting.  The program is made possible through generous support from the H. Russell Smith Foundation. To watch the 2010 Loper Lecture featuring Vivian Schiller, click here. > more

President Obama taps CCLP Board Member Thomas Nides for Senior Foreign Policy Post   The United States Senate confirmed the appointment of Thomas Nides, a member of the CCLP advisory board, to become President Obama's Deputy Secretary of State for Management and Resources. In this post, Nides will serve as "Chief Operating Officer of the Department and as alter ego to Secretary https://ui.constantcontact.com/visualeditor/visual_editor_preview.jsp?agent.uid=1104234436926&format=html&printFrame=true

Clinton" according to the State Department website.  > more In other CCLP personnel news:      Mark Latonero has been appointed CCLP research director. An award­winning and widely published scholar, Latonero serves on the faculty of California State University, Fullerton. He previously directed USC Annenberg's London semester program and earned his Ph.D. in Communication from USC Annenberg. Mark's work on CCLP's Trafficking in Persons project was recently profiled by Investor's Business Daily. > more    Genet Berhane has joined CCLP as a law fellow, succeeding Ariel Fox, who is now based in Washington, D.C. as an associate with Foley & Lardner. Berhane is a graduate of Vanderbilt University Law School, where she was editor­in­chief of the Vanderbilt Journal of Transnational Law.   > more   John Hrabe has been appointed as a CCLP graduate fellow. Hrabe has worked in Sacramento and Southern California as a staff member for local and state elected officials. He is completing USC Annenberg's joint master's degree with the London School of Economics, where he just completed a year of travel and study. > more