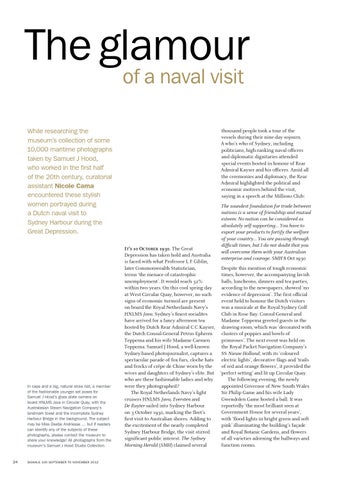 The glamour of a naval visit

While researching the museum’s collection of some 10,000 maritime photographs taken by Samuel J Hood, who worked in the first half of the 20th century, curatorial assistant Nicole Cama encountered these stylish women portrayed during a Dutch naval visit to Sydney Harbour during the Great Depression.

In cape and a big, natural straw hat, a member of the fashionable younger set poses for Samuel J Hood’s glass plate camera on board HNLMS Java in Circular Quay, with the Australasian Steam Navigation Company’s landmark tower and the incomplete Sydney Harbour Bridge in the background. The subject may be Miss Deetje Andriesse … but if readers can identify any of the subjects of these photographs, please contact the museum to share your knowledge! All photographs from the museum’s Samuel J Hood Studio Collection

thousand people took a tour of the vessels during their nine-day sojourn. A who’s who of Sydney, including politicians, high-ranking naval officers and diplomatic dignitaries attended special events hosted in honour of Rear Admiral Kayser and his officers. Amid all the ceremonies and diplomacy, the Rear Admiral highlighted the political and economic motives behind the visit, saying in a speech at the Millions Club: The soundest foundation for trade between nations is a sense of friendship and mutual esteem. No nation can be considered as absolutely self-supporting… You have to export your products to fortify the welfare of your country… You are passing through difficult times, but I do not doubt that you will overcome them with your Australian enterprise and courage. SMH 8 Oct 1930

It’s 10 October 1930. The Great Depression has taken hold and Australia is faced with what Professor L F Giblin, Despite this mention of tough economic later Commonwealth Statistician, times, however, the accompanying lavish terms ‘the menace of catastrophic balls, luncheons, dinners and tea parties, unemployment’. It would reach 32% according to the newspapers, showed ‘no within two years. On this cool spring day evidence of depression’. The first official at West Circular Quay, however, no such event held to honour the Dutch visitors signs of economic turmoil are present was a musicale at the Royal Sydney Golf on board the Royal Netherlands Navy’s Club in Rose Bay. Consul-General and HNLMS Java. Sydney’s finest socialites Madame Teppema greeted guests in the have arrived for a fancy afternoon tea hosted by Dutch Rear Admiral C C Kayser, drawing-room, which was ‘decorated with clusters of poppies and bowls of the Dutch Consul-General Petrus Ephrem primroses’. The next event was held on Teppema and his wife Madame Carmen the Royal Packet Navigation Company’s Teppema. Samuel J Hood, a well-known SS Nieuw Holland; with its ‘coloured Sydney-based photojournalist, captures a spectacular parade of fox furs, cloche hats electric lights’, decorative flags and ‘trails of red and orange flowers’, it provided the and frocks of crêpe de Chine worn by the wives and daughters of Sydney’s elite. But ‘perfect setting’ and lit up Circular Quay. The following evening, the newly who are these fashionable ladies and why appointed Governor of New South Wales were they photographed? Sir Philip Game and his wife Lady The Royal Netherlands Navy’s light Gwendolen Game hosted a ball. It was cruisers HNLMS Java, Eversten and reportedly ‘the most brilliant seen at De Ruyter sailed into Sydney Harbour Government House for several years’, on 3 October 1930, marking the fleet’s with ‘flood lights in bright green and soft first visit to Australian shores. Adding to pink’ illuminating the building’s façade the excitement of the nearly completed and Royal Botanic Gardens, and flowers Sydney Harbour Bridge, the visit stirred of all varieties adorning the hallways and significant public interest. The Sydney function rooms. Morning Herald (SMH) claimed several 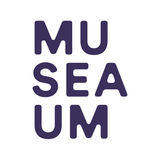