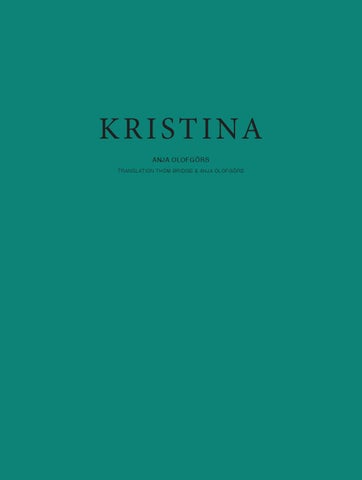 PART ONE So there I sat, with the crown in my hands: I had decided I was going to give it back

Raised to be a man and a ruler And so…

–in the nation’s interest–

the need to be a woman, a child bearer and a wife Both, or neither

Obeyed and respected But was I loved?

Instead I thought of becoming human.

My story is a blend of

realism, surrealism and nightmare. I am a female myth:

a mythologized icon One among many.

I was born with the caul - face, arms and legs free. I was covered in hair and had a rough, strong voice. All of this meant that the midwives thought I was a boy. They filled the whole castle with their false cries of joy that for a second confused

the King himself. Hope and longing worked together to mislead them all. And a deep embarrassment spread when they saw that they had been mistaken.

My father loved me, in spite of it all. The King ordered all of my teachers to provide

me the best education that Sweden could possibly offer. I would be given a completely male upbringing, I would learn everything that a young prince needed to know in order to be fit to reign. He was explicit in what he didnâ&#x20AC;&#x2122;t want: I should not be imprinted with something of my genderâ&#x20AC;&#x2122;s mindset.

Everyone hoped I would be just as good as a boy.

I learned everything about science and sport Likewise, weaponâ&#x20AC;&#x2122;s use I was hard working

I read everything with pleasure.

I was raised to be a king.

My education wasn’t without its problems

First we were given the theological argument: —God says it should be this way. Then it was the medical reason:

—Women’s bodies are so weak.

They said that we were an imperfect man of some kind

An individual that stopped halfway to being a perfect man That we were some kind of natural malformation Albeit, an attractive one.

I dressed in male clothing, and I was told I was mannish I was courted by both sexes

I was dark, a plain woman with a crippled shoulder Had a neck that was short and thick I was short, had a broad forehead,

shining eyes and and a hooked nose

I did not have much of a female beauty ---- or a classic beauty. I had more of a

My temper was nothing but fire and flame Heated and dry ----

Cold and damp â&#x20AC;&#x201C; to breed healthy and strong children. No, the makeup of my body was similar to that of men Inside of me the seeds of men did not develop Here it was arid and overheated

I defended myself from being associated with femininity! I thanked God that he made my soul completely male.

I was always told I was mannish

I was constantly reminded by those surrounding me that I was

I’ve always seen my gender as a fault,

my biggest fault. I’ve learnt that my gender’s weakness: is the greatest of weaknesses.

*** So there I sat, with the crown in my hand: well educated. But women and power were seen as two incompatible greatnesses. I were still expected to marry and breed

for succession: to be a woman. While being cavalier in wearing male clothing and

partaking in activities traditionally reserved for men alone: I started to experience a profound sense of alienation. I could not take on the role that men of power wanted me to play. Why should I, a woman, play a manâ&#x20AC;&#x2122;s war-like part. I was bred as a man,

despite having the weakness of being a woman - and I begin to question the favour. The men of power looked for faults and chose the most tragic alternatives. Sweden

was too conservative for me. I wanted to find myself amongst tolerant and broadminded people.

Therefore, there was no other choice other than to abdicate.

I changed my life - and my religion too. So there I sat, with the crown in my hands: I had decided. I was going to give it back.

My self-confidence was not great

My gendered self-perception was shattered - no doubt about that Far within me there was an unpredictable tyrant Can a woman rule? Was I a woman?

Or some kind of double-gendered creature? I was royalty: a superhuman in possession of supernatural powers

I thought that one day God or The Philosopher’s Stone could perfect me into a man.

*** So then one day I had a uterine-prolapse:

My uterus hung out of my vagina like a club

and I registered this as an extruding male organ.

I thought I had metamorphosed into a man. This was in the 1670’s.

—a well-known gynaecologist—had read my autobiography very closely. It was he, Dr Elis Essen Möller, who conducted a “human-study-from-a-medical-perspective”

He stated that I was a pseudo hermaphrodite: Intersexual –

One half woman, one half man

On the one half born with a vagina, and on the other born with a penis I was neither clearly a woman or a man.

He attached great importance to the stories from my childbirth, particularly the one about my gender being initially mistaken for a boy. He believed that my minor

interest in fashion and the fact that I was irrationally smart were reason enough for me not to be a woman.

And this would be clearly evident in the look on my genitals.

I was allowed to rest in peace until 1965 1965, my grave was exhumed in order to sex my gender Yes, it was a gang of men that shouted:

—We want to dig up Queen Kristina’s corpse to explore her sexual constitution!!

I ask myself: is it even possible to say something about a person’s sexual constitution (whatever that is) by staring at a 400-year old skeleton? —No, of course not!!

The quote from the exhumation was therefore something of an anticlimax for this gang of old men.

“Our flawed knowledge of intersexuality’s bearings on the formation of the skeleton (see above) means that it is not possible to determine the diagnose: intersexuality.”

When we think of ourselves - we turn inwards. There we see and feel the various

layers that exist within our spiritual self. But I—an historical figure—am analysed and reduced into something completely understandable. My irrationality seems to have fascinated and puzzled you. Lots of times I contradicted myself - but I have just explored an assortment of ideologies in search of identity.

I emerged as an individual shaped by social force. I was raised as a man and inherited men’s disparaging view on women. During my lifetime I expressed misogyny in many ways. I know I’ve called pregnant women swollen cows. I became part of

a scheme that I could neither comprehend nor control. The confusion became too stressful – and I felt victimised by my own body. How wrong, how wrong could

I have been to condemn women for their weakness. And I must admit, I dream(t) of the option to have a child, but not of surrendering to the control of my biology.

*** Here we are again... I am talking about my relationship to the female role,

my sexuality and personal life. You can call it gossip, if you like. As with Elisabeth I of England and Catherine of Russia it is always our private life that are in focus.

I have played the protagonist in many fairy tales.

I have struggle(d) with difficulty to free myself from my own story.

I believe such an interest rests upon the understanding that the reconstruction of life can never be detached from the source of the reconstruction.The lens we use to filter my life story becomes as important as the narrative itself.

Today, I am a trendy character.

Todayâ&#x20AC;&#x2122;s fairytale is about where I was ahead of my time? If I were a feminist, or queer? Or maybe butch?

I donâ&#x20AC;&#x2122;t want to be a discrete individual, fixed in time and place. This is not a documentary.

My character has been constructed, concentrated, distilled - and in some events changed.

This is a metaphor.

It reflects on the dilemma of the real me. My story is a blend of realism, surrealism and nightmare. I am a female myth: a mythologized icon One among many.

My story is a blend of realism, surrealism and nightmare. I am a female myth: a mythologized icon One among many.