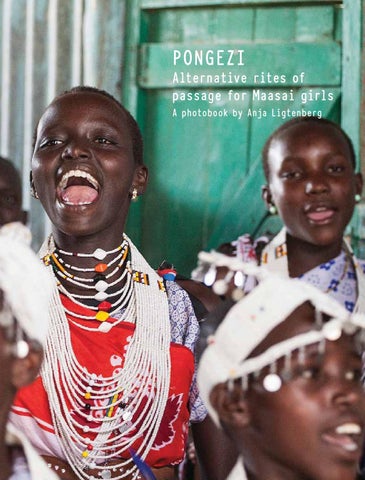 EDUCATION When the Maasai were asked what they wanted instead of the cutting, their answer was: education. This resulted in three days of workshops for the girls on health issues, hygiene, sex education, self-empowerment, and womenâ&#x20AC;&#x2122;s rights. As part of the alternative rite of passage, the girlsâ&#x20AC;&#x2122; parents sign contracts, promising not to circumcise their daughters, keep them in school, and to not marry them off until they have completed their studies. For many families this means a serious financial burden as they will need to keep paying the school tuition. But the Maasai are taught that it is also economically smart to keep the girls in school. They contribute more to the community and bring a larger dowry. For instance, a father would receive five cows for a teenage girl, but maybe thirty cows plus money for a 22-year-old that has been to school.

CELEBRATION The night before the ceremony, after the workshops are completed, a candlelight parade is held. The girls sing a special song for this occasion: Washa moto wa masomo (Light the fire of girl education) Zima moto wa tohara (Put out the fire of girl circumcision) The meat from a slaughtered sheep is cooked and eaten by the women and the skin is used to make bracelets and necklaces that mothers then give to their daughters. The girls’ heads are shaved – symbolically removing their “childish hair” so that “women’s hair” can grow in its place. Cow’s milk is poured over the girls’ scalps as a literal and symbolic cleanser. The girls’ heads, faces, and feet are painted with red ochre, which the Maasai associate with happiness and beauty. That night, the girls stay inside the home to spend time with their mothers, who share with them life lessons and offer sage advice. Traditionally, the girls would be circumcised the next morning at dawn. The next day is marked by a celebration with dancing, eating, and drinking. Every age group has its own dance and song. The girls parade to the manyatta (traditional village) and are met halfway by the warriors who welcome them and accompany them inside. The elders give their blessing to the girls and together with the chief warriors they declare to the parents: “Don’t worry, we will marry your daughters” even though they are uncircumcised. And to the girls: “we’re with you; go finish school and follow your dreams.” The elders and the warriors then form an arch with their sticks and the girls pass beneath, singing and dancing. They are now welcomed and accepted as women in their community.

FACE PAINTING Several days after the ceremony, the faces of the girls, who are now women, are elaborately painted to protect them from evil spirits and to symbolize that they are ready for marriage. The tradition says the Maasai men can now approach the families and ask for their daughtersâ&#x20AC;&#x2122; hand. Unlike in the past, however, the weddings will take place only after the young women have finished school. Pongezi, a photobook by Anja Ligtenberg Maasai girls become woman without circumcision and celebrate an alternative rite of passage. They st...

Pongezi, a photobook by Anja Ligtenberg Maasai girls become woman without circumcision and celebrate an alternative rite of passage. They st...