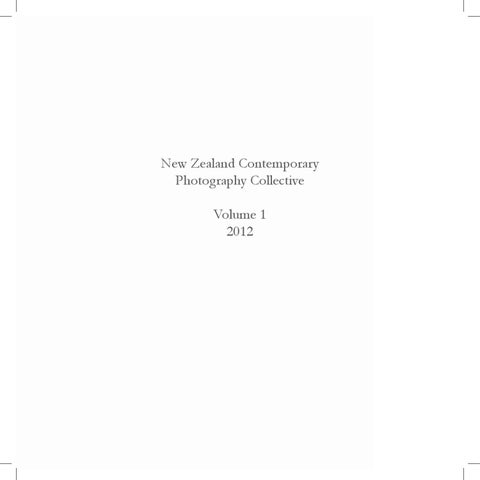 Photographs from Greta Andersonâ&#x20AC;&#x2122;s earlier series The Stand-Ins portray staged figures in beautiful, lush and surreal landscapes. In her most recent work, while living in Budapest, Hungary, she continues her exploration in the landscape, depicting subtle, yet strange natural occurrences. Greta has worked commercially for numerous publications and lectures in photography at Elam School of Fine Arts, Unitec Institute of Technology (both in Auckland) and the Sydney College of the Arts. She was born in New Zealand.

Meighan Ellis’ Sitters are photographed from afar. This is known as scopophilia: a love of looking from a distance, from behind a camera. The portraits are made of her friends and acquaintances from various places where she has lived or passed through, masculine “beauties” making the natural evolution from boyhood to becoming a man. Similar are Ellis’ photographs of Sites, observations and collections of lone, solitary and singular figures that conjure up memories of a place of significance, or a shared past. In 2009, Ellis completed her Masters Degree of Fine Arts at Massey University in Wellington, New Zealand and has exhibited in New Zealand and internationally. She has lived in Tokyo, Sydney and London and is currently based in Auckland.

Tash Hopkins maintains a strong interest in the varied environments of the world while travelling. Mostly using a 4x5 camera, she photographs teenagers and younger people in their surroundings, drawing from her genuine intrigue in the constantly changing perspectives within the personal and collective realm of youth. Tash lived and worked in London for three years before moving back to Auckland to work in commercial photography. She has worked for clients both in New Zealand and overseas and is working on producing a book of images portraying New Zealand youth in their specific environments.

Alexa Mickellâ&#x20AC;&#x2122;s images exist at the intersection between the moment and the constant, amid a fleeting feeling of being alive and consciousness of the moment passing. Her interest in photography is strongly linked to time in the past tense, to the possibility of being able to freeze a moment, to make something stand still. The intention is to be interpreted symbolically and to activate a space for remembrance for viewers. Born and raised in Auckland, Alexa is currently in her final year studying towards a Bachelor of Fine Arts in Photography at the Whitecliffe College of Arts and Design.

Working predominantly with a Mamiya RZ67 using black & white film, Solomon Mortimer’s photographs are of people he meets over the course of his daily wanderings and adventures. These encounters are then presented in analog prints and featured in his self-published, hand-made books, combined with his own writings and drawings. More recent book titles include A Recent Encounter and Solomon’s Travels, all from limited editions. Solomon was born and raised in Auckland, New Zealand. He completed a Bachelor’s Degree in Fine Arts at Unitec Institute of Technology in Auckland. His photographs have been exhibited throughout New Zealand, most recently his first solo show at Anna Miles Gallery in Auckland, during the Auckland Festival of Photography in June 2012.

Personal Effects investigates ideas of personal taonga. For Maori, taonga are tapu; sacred objects, and they offer concrete connections with ancestors and the past. The objects in this series are of personal, emotional and historical significance and are taken from Nunesâ&#x20AC;&#x2122; own collection. An object becomes invested with additional meaning via ritual, repetitive handling and viewing, faith and salesmanship. These works play on the tensions between the inherent value of an object and its perceived worth. They open up questions surrounding the role faith plays in our consumption of art. Nunes employs photography in her attempt to see past the visible; these images confound us with the inherent inability of photography to see beyond surface, despite our endless and illogical search for that which is forever hidden in a photograph. Nunes was born in the United Kingdom, where she studied film before moving to New Zealand. She currently works as a photographer and lecturer, while living in Auckland with her young daughter.

Following the February 22, 2011 Christchurch earthquake, photographer David Straight found himself on a flight from Auckland to Christchurch, the city of his birth. He spent two weeks in the city, over a three-week period, walking for hours around the suburban streets, from west to east, simply to see with his own eyes what an earthquake looked like. What resulted is a series of photographs that speak of the disruption and fragility of the suburban environment. The images are subtle in their language and become powerful in what they do not reveal. They, in effect, create a landscape of an earthquake. David graduated from Massey University School of Fine Arts, Wellington and was a former Archive Intern at Magnum Photos in New York. He then moved to London where he worked on his first book, The End of London, which was shortlisted for the 2010 Dummy Book Award at the International Photobook Festival in Kassel. Since then, he has been engaged in several new book works that explore the varying terrain of contemporary documentary photography, the latest being a trilogy of books called The Austerity Project.

Parisa Taghizadehâ&#x20AC;&#x2122;s work deals with issues of personal and cultural identity. In all her projects, it is peopleâ&#x20AC;&#x2122;s individuality that interests her, rather than the world that defines them or the conditions under which they live. Mother is a series of photographs of women without their children. The project was a way to bring to the surface the identity that gets pushed to the side and ignored after women take on their new role as mothers. In 2001, on a visit to Iran, her country of birth, Parisa embarked on a project photographing women in the process of putting on their make-up. In a country where women have to cover their hair by law, make-up becomes a symbol of defiance and a means of empowerment. Parisa has exhibited her work extensively including commissions by The Fowler Museum at UCLA and The San Francisco Arts Commission. She has worked as a publicity stills photographer for Serpentine Gallery in London and as a stills photographer for directors such as Michael Winterbottom and Jane Campion. Parisa currently lives in Auckland, New Zealand.

Lay of the Land, an ongoing series by Anita T贸tha, explores the interaction between a place of geographical isolation and its inhabitants. Coming from New York and settling in to her new environment of New Zealand has allowed Anita to capture a place that is uninhibited and pure, at first glance. With time the discovery of extraordinary landscapes, light and color are paired with moments of stillness and sheer reflection, allowing the realities of daily existence and modern life to unfold. Anita is a photographer and curator from New York. She studied in Budapest, Hungary and attended the School of Visual Arts in New York City majoring in photography. She completed an internship with photographer and sculptor Simen Johan and worked at the Yossi Milo Gallery for the next four years. She has given lectures at the State University of New York, as well as various Auckland universities. Anita is currently based in Auckland, New Zealand.

Lens-based image making is globally in flux. Both challenged and stimulated by technology, our roles as image-makers are more complex than ever. One year ago, three photographers from different backgrounds and artistic practices, living and working in New Zealand, came together to set up Tangent. This collective offers an opportunity for artists to gather at regular review sessions in order to gain valuable feedback for work in progress and to engage in vigorous dialogue and group discussion. Tangent offers a supportive environment for critique and debate, as well as opportunities for the exhibition and distribution of new work to a wider audience. Tangent Volume 1 2012 offers a glimpse into contemporary photography from New Zealand. Tangent is Becky Nunes, Parisa Taghizadeh and Anita T贸tha: Practicing visual artists with backgrounds in photography, curating and education.