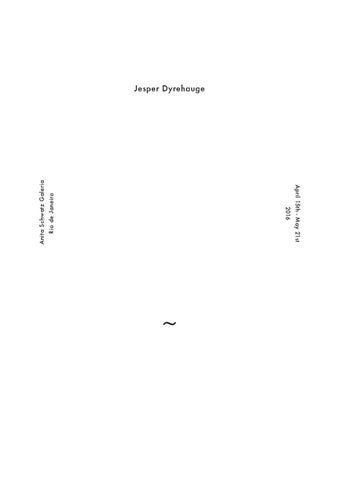 “A line is a dot that went for a walk…” – Paul Klee Opening this essay with the famous quote of Swiss painter Paul Klee seems like an appropriate way to introduce the work of the artist Jesper Dyrehauge (born in Denmark 1966). Illustrating the tradition of writing, movement and form Klee’s quote adds a humorous ease that eliminates the element of conformity and introduces the idea of drawing as an organic and transformative process in constant movement. Likewise, the artwork of Jesper Dyrehauge challenges our perceptive ways of looking by seeking to dissolve art historical conventions of formal visual language. During the last decade Dyrehauge has devoted his practice to investigate the notion of what constitutes painting. Without any specific reference points, he works in a non-figurative style informed by formalistic interests such as color, line, size and texture - ultimately being concerned with the formal qualities of applied paint on canvas. In this endeavor Dyrehauge could easily be categorized as a modernist styled painter. Someone carrying on the legacy of the abstract painting of the 50es and 60es, as appraised by American art historian Clement Greenberg, who believed that the technically proficient modes of painterly abstraction represented the pinnacle of Modern artistic achievement 1 . But by intentionally inviting elements of chance, error and humor to enter his work, Dyrehauge proposes the possibility of painting to exist in a much more fluid, uncategorized and non-hierarchical state – a state of “in-between”. However, just as much as Dyrehauge’s works take the immediate form of painting, just as clear is it to him that his work should negate the supreme hierarchical status of modern painting, and instead allocate attention to the more elusive and coincidental possibilities of the artwork and the qualities it can generate. “The modern painting expressed through the gesture of the white, male artist’s brush stroke, is quite charged with the promise of imminent genius and sublime transcendence. This discourse is not my point of reference – rather my point of escape”, the artist has stated. “Therefore I prefer to call my work “works” or canvases, rather than paintings”. For Dyrehauge, the first step in this escape was to remove the brush. Instead he would use a simple vegetable like a carrot or potato as application tool. As this choice of material naturally connotes a level of domestication, an ironic

comment to the idea of the “magic brush” is also alluded. The second step was to apply a somewhat mechanical method. It should still be carried out by the artist’s hand, but at the same time allow him to distance himself from the “act of painting” - just enough, so it would prevent himself from “becoming the work”. With these constructive limitations, Dyrehauge came to invent his signature style of mono-tasking “carrot-stamping” – a mode of practice that still defines his work today.

Carrot stamping Dyrehauge’s carrot stamping-technique is based on stamping lines of colored dots onto a raw linen canvas using the grid as his directive pattern. Varying only slightly in color, composition and size Dyrehauge shapes and layers his dotted canvases. Before beginning a new work, Dyrehauge prepares his carrot by slicing it either in a square, triangle or circle shape - then he chooses his pallet of color. Often the colors are monochrome, other times two contrasting or toned colors are combined in one canvas. For the actual stamping, the canvas lies down flat on a horizontal surface allowing no change of perspective during the working process. Since the work has already been conceived in the artists mind, as an inner image or idea, the task is now to produce it. Once started on the canvas he stamps the dots one by one in a continuous, repetitive fashion, not stopping before the work is finished. No major breaks are taken otherwise the carrot will dry out and change shape. Only when the work is completed, and a patterned grid from top to bottom has immerged, the artist can step away from the canvas, hang it on the wall and give it its first evaluative look from a new, distanced perspective. The stamping process requires the artist’s full attention of precision and care. Each dot or stamp matter the same. Yet in its iterative method, the stamping eventually reaches a level of meditative flow, where subconscious decisionmaking takes over. Eventually an error will occur, which due to the stringent method of process cannot be corrected or changed. If one stamp accidently is placed a millimeter too high or low from the imaginary gridded line, Dyrehauge instinctively has to choose, whether to integrate the divergent dot in the grid, or to discard the canvas. These instinctive yet pivotal decisions happen multiple times during the process, and as such they are the decisive moments of the work’s creation. Together, the divergent dots conclude the impalpable sum of unforeseen and subtle disharmonies emerging in the patterns. These occurrences - which can never be fully anticipated, known or understood – are the vehicle for reinvention every time Dyrehauge sits down with a new canvas.

~ For his first solo exhibition in Brazil at Anita Schwartz Gallery, Rio de Janeiro - on view from April 15 – May 21 2016 - Jesper Dyrehauge has produced two new bodies of work consisting of twelve carrot-stamped canvases done with acrylic paint and ten color photographs. Both series have been produced in Rio de Janeiro during the artist’s one-month residency. All the individual works are untitled, but the exhibition as a whole bare the title ~ as a somewhat mystic yet very descriptive introduction to the interpretation of the show. ~ - being the symbol of the tilde - refers in Latin to something “being similar” or “of the same magnitude”. In English the symbol reads as “approximately”. Comparing the symbol to the double-tilde ≈, which indicates a value that can be considered functionally equivalent for a calculation within an acceptable degree of error, ~ however is used to indicate a larger, possibly significant, degree of error 2. Equipped with this detailed knowledge of difference between something quite similar, but yet not the same sets the receptive mode for the exhibition. In the main gallery space the twelve canvasses are exhibited. All works have a different horizontally divided composition, balanced by two stamped blocks on top of each other creating a sense of ‘above’ and ‘below’. The color pallet ranges from bright primal colors of reds, blues, yellows and greens, to muted and toned colors that appear either in solid or fading monochrome blocks. On the canvas they visually stand out on a scale from convex to concave, from appearance to disappearance. Although the element of mechanization bares a strong presence and can dominates the immediate perception of the work, when looking closer and longer, one will notice, that every work emanate a powerful sense of individuality. As such, each work allure a sensibility of tranquility within the color field, while simultaneously juxtaposing a constant fluctuating relationship between order and disorder, balance and counterbalance. Also present is a strong sense of asymmetry and shifts in focus - not only in the different sizes of the canvas, but also in the compositions themselves. As one move closer to the surface to study the dotted lines, another underlying layer of dots reveal itself in certain parts of the canvases. This creates a scintillating effect of almost aerial quality, alike the one you would experience in front of an Op-art painting by Bridget Riley or one of Agnes Martin’s pale, gridded monochromes. One feels instantly manipulated in the attempt to control the eye’s sense of perception, but at the same time deeply fascinated. Because you come to realize, that the modes of temporality and sliding loss of visibility control, can change the mechanisms of seeing, and ultimately ones way of understanding how to see.

Photographs On the upper floor of the gallery the second part of the exhibition is presented. Here, a series of framed color photographs shows ten different sculpture tableaus, made up of rustic stones mounted on a casually shaped lump of colored plasticine. All the stones have a naturally made hole worn into them by the sea, making each of them unique in form and shape. The tableaus rest upon a matching colored sheet of cardboard creating a space of foreground and background, with the stone in the center. The hole in each stone - when seen in front of the colored cardboard – suddenly appears as a colored dot. The photo series thus becomes a line of colored dots, evoking - similarly as to the canvases - a rhythmic topography as the eye follows the dots, and the horizontal ‘divide’. The stones are all random finds: so-called objet trouvé’s. Since always Dyrehauge has, when walking the beaches of his homeland island of Funen, Denmark, instinctively looked for stones with holes in them. Over the years, this practice has accumulated a large collection. Ten of those found stones are used in the photographs. Knowing this background story, one can find it tempting to add a layer of storytelling to the reception of Dyrehauge’s work. However, this is not the artist’s concern, as nostalgia simply plays no role in his work. On the contrary Dyrehauge emphasizes that no emotional selection process has been performed in choosing the stones for the tableaus. It was purely a question of the proportions of the holes, so they could function as the physical matrices that would provide the possible experience of a colored dot on a horizontal line. Having an acute awareness for the viewer’s aesthetic experience, the spatial relationship between the individual works - whether canvases or photographs - is another central concern for Dyrehauge. This comes to show in his way of hanging. All works are hung in a slightly asymmetrical manner aligned according to their centre or mid-points, creating a rhythmic topography throughout the room. The oscillating fields of color and intensities in the works add to this rhythmic flow, and also echoes the artist’s mode of production when stamping.

Idiosyncratic paradoxes Encountering the work of Jesper Dyrehauge, the creative credo of Paul Klee comes to my mind: “Art does not reproduce the visible; it rather makes the visible” 3. In the same way, Dyrehauge challenges his viewer to experience and recognize the complex nature of perception assuming the point that seeing and looking is always in a state of flux. For Dyrehauge his works are first

and foremost objects that need to be experienced and looked at. Hereby he proposes that the experience of looking, and looking carefully, can exceed the predetermined understanding of what an artwork can be. While the work to some aesthetic degree reference elements from Minimalism, abstract expressionism, Op Art, Arte Povera and even Brazilian concrete modernism, Dyrehauge’s quiet abstractions maintain their own curious, humorous and poetic independence - defiant of any trends in contemporary culture. As the subtle occurring irregularities somewhat blur the formal rules of the works, one discovers that these gaps between order and disorder, regularity and irregularity, actually pervade a hidden measure, which goes beyond the subjective consciousness of the artist. To Dyrehauge this realization became the defining dimension concluding his works as visual idiosyncratic paradoxes. A convenient paradox that goes hand in hand with Dyrehauge’s intention of implementing a democratic principle in his process of art making and informing a core belief of his: that ideally, no relation - whether in art or in life - should be based on hierarchy.