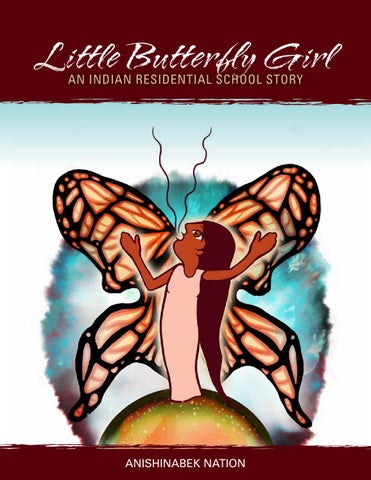 All characters appearing in this work are fictitious. Any resemblance to real persons, living or dead, is purely coincidental.

The Union of Ontario Indians gratefully acknowledges the financial contribution from the Truth and Reconciliation Commission of Canada for this work.

At the edge of the First Nation one October day, Little Butterfly Girl was picking apples that her Mommy would use to harvest for the winter months. She was excited to be out, as she was not allowed outside last month in fear of the Indian Agent and the Police coming to take the children away to the Indian residential school. 4

It was getting dark so she started heading home when out of the bushes a hand grabbed her â&#x20AC;&#x201C; it was the Indian Agent! Little Butterfly Girl tried to yell but her mouth was covered. She tried to fight but he was so much bigger. Her eyes were covered, she could not see. It was so dark. She felt the movement of a car.

“Wake up,” she heard the Indian Agent say. She opened her eyes and saw a large building, bigger than she had ever seen before. A woman with a face the colour of snow came out. She was wearing a long black dress that also covered her hair. The woman came to Little Butterfly Girl, took her hand and started leading her into the building. “NOOOOOOOOO,” screamed Little Butterfly Girl. Nobody helped her. 6

Inside, the woman washed Little Butterfly Girl until her skin was bleeding. Her clothes were taken away. She was given a long dress and shoes to wear. It made her skin itch. Her beautiful long hair was cut short. She cried.

She was brought into a large room where there were so many children but she did not recognize anyone. She was given some food to eat. She put it in her mouth; it was mushy, cold, and tasted horrible. She spit it out. She tried to talk to the girl sitting beside her but the girl quietly told her â&#x20AC;&#x153;you cannot speak our language or you will be punished. You must speak their language.â&#x20AC;? She was so confused.

The girls were lead into a room that had beds all lined up in a row. The other girls kneeled down beside their beds with their hands placed together near their chest. They were all saying something in that strange language. She got into bed. The woman in the dress turned off the lights. It was so dark. She heard a click; the door was locked. She heard girls crying. She saw the man in the dress enter the room and lead one of the girls out of the room. She heard strange noises. She was scared. 10

The years passed and she was finally done school and was able to return back to her First Nation. It took three days of travelling by train and car to get there. When she arrived, she almost did not recognize her father. “Little Butterfly Girl, it is so good to have you home,” said her father, hugging her tightly. “Mary. My name is Mary,” she said. He told her how he and her mother begged the Indian Agent to return her when they found out she was taken. Their words were not listened to. He told her that her mother had died eight months before and he sent word to the Indian residential school. She had never been told. 12

She grieved for her mother. She struggled to know her father and the people in her First Nation. She found their language hard to understand. She did not understand the way they did things. She was so confused. Feeling that she did not fit in, within a few weeks she left the First Nation and moved to the city where she got a job cleaning houses and sewing. She applied for other jobs but was told that she did not read or write well enough.

She met William; an older boy who had went to the same school as she. They never talked about what had happened at school. They never spoke their language. They eventually married in the church and had three children, continuing living in the city. She was always scared that someone would take her children away. She loved her children but could not tell them and always felt distant from them. She found she was always angry and fearful, but did not know why. 14

She received the news at work one day that William had been in a car accident. She felt like her life was falling apart. She was worried that they would end up on the street like other people she had went to school with. She could not raise three children in the city on her salary. She decided to move back to her First Nation.

She did not know what to expect when they arrived in the First Nation but people were so friendly and welcoming. She didnâ&#x20AC;&#x2122;t understand why she didnâ&#x20AC;&#x2122;t feel like she fit in when she had returned after school. After returning home, her oldest son James encouraged her to take a local moccasin making class. She was at first ashamed that she did not know how to make moccasins, but she found she really enjoyed the class and meeting all of the people in her First Nation. 16

Soon she was invited to attend an AnishnawbeKwe sweat lodge ceremony. While scared and shy about not knowing what it was, she agreed to attend. She went into the lodge and found her place. She smelled the air and felt surprisingly calmed by the smoke and heat inside. The Elder asked her what her name was. “Mary,” she replied. The Elder asked her again. Embarrassed,“Mary,” she said quietly. The Elder asked her a third time. “Little Butterfly Girl,” she said proudly. It was the first time she had ever said her name in twenty-two years. Little Butterfly Girl cried. She cried tears of sorrow for her lost childhood, her lost family, her lost teachings and language, and her lost time and love with her husband and children. Little Butterfly Girl cried. She cried tears of joy of finding herself and beginning her healing journey. 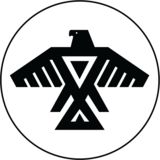 A story of how a little girl loses her spirit and identity during her time at Indian Residential School.

A story of how a little girl loses her spirit and identity during her time at Indian Residential School.