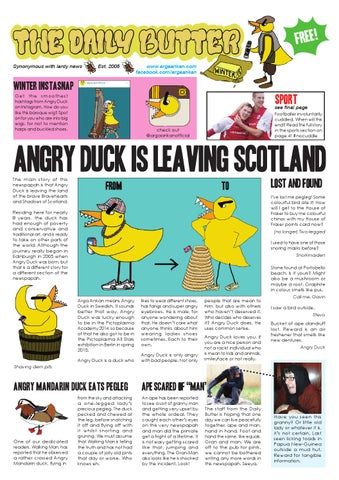 WINTER Instasnap Get the smoothest hashtags from Angry Duck on Instagram. How do you like this baroque wig? Spot on for you who are into big wigs, for not to mention harps and buckled shoes.

see ﬁnal page Footballer involuntarily cuddled. When will this end? Read the full story in the sports section on page 4! #nocuddle

Angry Duck IS leaving scotland The main story of this newspapah is that Angry Duck is leaving the land of the brave Bravehearts and Shadows of Scotland.

Residing here for nearly 8 years, the duck has had enough of poverty and conservative and traditional art, and is ready to take on other parts of the world. Although the journey really began in Edinburgh in 2005 when Angry Duck was born, but that is a different story for a different section of the newspapah.

(no longer) Two-legged I used to have one of those snoring masks before? Snorkmaiden Stone found at Portobello beach. Is it yours? Might also be a mushroom or maybe a root. Graphite in colour, smells like pus. Arga Ankan means Angry Duck in Swedish. It sounds better that way. Angry Duck was lucky enough to be in the Pictoplasma Academy 2014, so because of that he also got to be in the Pictoplasma All Stars exhibition in Berlin in spring 2015. Angry Duck is a duck who

likes to wear different shoes, has fangs and super angry eyebrows. He is male, for anyone wondering about that. He doesn’t care what anyone thinks about him wearing ladies shoes sometimes. Each to their own. Angry Duck is only angry with bad people. Not only

people that are mean to him, but also with others who haven’t deserved it. Who decides who deserves it? Angry Duck does. He uses common sense. Angry Duck loves you, if you are a nice person and not a racist individual who is mean to kids and animals, smileyface or not really.

Call me. Gavin I saw a bird outside. Stevo Bucket of ape dandruff lost. Reward is an air freshener that smells like new dentures. Angry Duck

One of our dedicated readers, Walking Man, has reported that he observed a rather crossed Angry Mandarin duck, ﬂying in

from the sky and attacking a one-legged lady’s precious pegleg. The duck pecked and chewed at the leg, before snatching it off and ﬂying off with it whilst snorting and gruning. We must assume that Walking Man is telling the truth and has not had a couple of jolly old pints that day or worse. Who knows eh.

APE Scared of “man” An ape has been reported to see a sort of granny man and getting very upset by the whole ordeal. They caught each other’s eyes on this very newspapah and man did the primate get a fright of a lifetime. It is not easy getting scared like that, jumping and everything. The Gran-Man also looks like he is shocked by the incident. Look!

The staff from the Daily Butter is hoping that one day we can live peacefully together, ape and man, hand in hand. Foot and hand the same, like equals. Gran and man. We are off to the pub for pints, we cannot be bothered writing any more words in this newspapah. Seeya.

Have you seen this granny? Or little old lady or whatever it is, it’s not certain. Last seen licking toads in Papua New-Guinea outside a mud hut. Reward for tangible information. 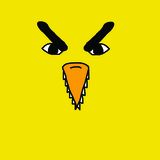 Similar to the Berlin version, but different still. All the lardy news from Angry Duck in Winter 2015. Made for the CharacterMart exhibition...

Similar to the Berlin version, but different still. All the lardy news from Angry Duck in Winter 2015. Made for the CharacterMart exhibition...