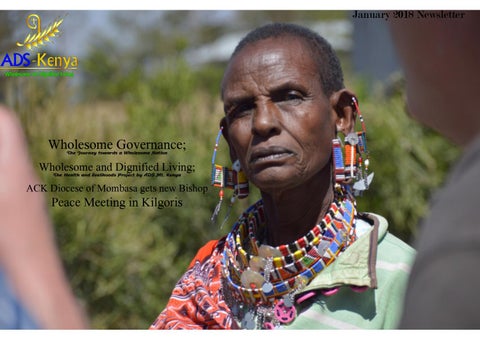 Wholesome Governance; The Journey towards a Wholesome Nation

Wholesome and Dignified Living; The Health and livelihoods Project by ADS Mt. Kenya

While also likening the Church to the Country, the Primate observed that true leadership model can be borrowed from the Biblical story of the spies that were sent by Moses to spy on Canaan before the Israelites settled in. When they came back, they all confirmed that the Land was good and productive. However, the Israelites were no match to the people who were in there. They were stronger and well established compared to the Israelites. From this story, the Primate urged all Church employees to be agents of hope. Even in face of challenges, the country was faced with, the church has the mandate to preach hope and lead Kenyans into a better future.

Earlier on in his New Year Message to the Country, the Head of the Anglican Church of Kenya encouraged Kenyans not to take Hostile positions against those who had different political opinions to theirs He said “we all have a responsibility to grow our country, together. If we let politics define our lives then the path which we are taking is dangerous” He called on the main political players to embrace dialogue and respect for the constitutional order as a way of dealing with crisis that Kenya was being faced with. The Most Rev. Dr. Jackson Ole Sapit/File Photo

The Anglican Church of Kenya has launched her first Thematic Focus for the year according to her 10 Year decade strategy. During the Start of Year Service held at the All Saint’s Cathedral on the 9th of January 2018, the Archbishop invited staff of various ACK Institutions to journey with him in ensuring that there was good governance in operations of the Church that could be used as a mirror for the country. He explained that this is an opportunity for the Church to be active and focused in its role as a custodian of the moral fabric of the society. This, coming at a time when the political situation in the country is still volatile and tense. The Archbishop challenged the Church employees to be beckons of hope for a better country by diligently serving the church and the society.

The Rt. Rev. Alphonce Baya is the new Bishop of the ACK Diocese of Mombasa. The Bishop was consecrated on the 7th Of January 2018. He succeeds The Rt. Rev. Julius Kalu who has been at the helm for 23 years. The Anglican Archbishop presided over the function. In his Bishop’s Charge, the new Bishop thanked the Christians from the Diocese for the Honor that they had bestowed “This is the place and the time for you to be good governors. Before you ask for a upon him and promised to work with other clergy to grow the Diocese. The better Government, would you also establish a better office, a better church and Archbishop also encouraged the Christian faithfuls to support the new Bishop. Prior to his Elections, Bishop Mwaro was a Lecturer at the ACK Bishop Hana better environment for those you serve,” he said. nington Institute of Theology and Development Studies.

Wholesome and Dignified Living; The

Along a recently tarmacked road in the dry lands Kiserian, Kajiado County, herds of cattle rush towards a water point. An old man stands guard, directing the animals in turns- as they take water. The headersâ&#x20AC;&#x2122; faces beam with happiness. They are grateful that here, they can find water for their animals, regardless of the numbers. Adjacent, stands a huge tower with water tanks seating at the top. Tress decorates the small piece of land where the water tanks rest. The piece of land was donated by a local clergy. A water borehole can be seen not from a far, a sight to behold especially in such a dry area. Beneath the soils, pipes run from the tanks to various homes, spreading to a radius of over 7kms around the area. A similar borehole stands at the ACK Olchorronyori Church. Three kilometers away from here, in an extraordinarily green farm, Mr. Gitau tends to his garden. Water pipes for drip irrigation run through his farm into the various garden portions of flourishing kales and tomatoes.

Other plants like wheat, dania, Maize, among others bask in the harsh sun, yet un-affected by its scotch, thanks to the irrigation water. Gitau sells his farm produce in Kiserian Town. This enables him get an income which he partly reinvests in his farm and also take care of his mother, who lives with him. In his backyard, bottles filled with water are placed on the roof of a small structure. He uses this method to treat his water through solar heating. He tells us that he is also training other small scale farmers in the area so that they too, can benefit from this knowledge and produce their own food to consume and also sell locally. In yet another Homestead, not far from Gitauâ&#x20AC;&#x2122;s, a middle aged woman; Maria Tirati whistles as her chicken ran towards her. She feeds them. She says that she sold some and got money to buy other food items in her home. She says that due to the harsh weather, she canâ&#x20AC;&#x2122;t practice much farming activities and thus the poultry business. Some few kilometers from her homestead, again, a group of women gather to share their stories from the field. These are Community Health Volunteers who work with the locals on issues health. They visit homesteads in the area to train them on health issues and then meet once per month for catchup and bench marking. Their stories are about improvements in the health status of the people they visit, the challenges they have faced and the new trends that they might have come across. The women also sensitize the local communities on the importance of hygiene. In most of the homesteads, leaky tins have been installed outside the pit latrines so that they can wash their hands after using the toilets. ADS has organized the women and trained them so that they can better serve their communities. In Naromoru Primary School, a school out of Kiserian town, a group of pupils who also happens to be the health ambassadors of the school, meet in one class during a break. They too are planning on their activities and taking stock of what they have been able to achieve. The young boys and Girls share a vision of raising the health standards in the School and ensure that the standards are also replicated in their homes. With support and training from ADS-MK, they have installed washing points across the School where fellow pupils can wash their hands. They also teach them on proper hygiene practices.

This has opened up access when delivering services like health. The project also seeks to transform the lives of this community through activation of their potential to use the locally available resources for economic empowerment. Women are also encouraged to make Maasai ornaments and sell them at the Local town. This ensures that they get extra income for their livelihoods. On the 22nd and 23rd of January a team from TAI led by the Chief Executive Officer, John Hickey, joined ADS-MK staff on a monitoring visit to some of the projects they are doing in the area. The Rt. Rev. Charles Muturi, Asst. Bishop Anglican Diocese of Mt. Kenya South joined the group. The Bishop Thanked the Team from TAI for the support they had given to ADS-MK to facilitate the developments in the area and invited them to continue sharing hope with the people living in the Area. He encouraged beneficiaries to share the information they had received from ADS with other community members so as to ensure that no one was left behind in the development journey. Mariah Tirati, a beneficiary, Feeds her Chicken. Photo/Andiwa

Back to the ACK Olchorronyori Church, a Church Building welcomes you into the compound. A second building proposed to host a Health Facility that will serve the local community; stands tall. The locals here hope that this will be soon, as the wait for such facilities has been long.

Mrs. Loise Wanjiku, ADS-MK Programs Officer in charge of the Wangige Zone, thanked the Team from TAI for the generous support they had extended to ADS. With the support, she observed the community members were socially and economically empowered. On his part, John Hickey appreciated the work of ADS-MK Staff were doing in the area in her efforts to reduce poverty in the region by empowering communities.

All these stories of transformation which have brought hope to the local Maasai community have been made possible by the Anglican Development services (Mt. Kenya) with partnerships and support from the Transform Aid International. ADS-MK has mobilized various groups and trained them on various things through the Health and Livelihoods project. Through the Community Led Disaster Risk reduction Approach, the community members are facilitated to come up with solutions for the problems they faced. These include mitigations against the effects of the harsh climate conditions found in the area and protection against spread of diseases like Cholera. The Communities were also mobilized to lobby the County Governments for the improvement of road networks especially in the remote parts of the community.

Loise Wanjiku from ADS Mt. Kenya with a guest from Tai Photo/Andiwa