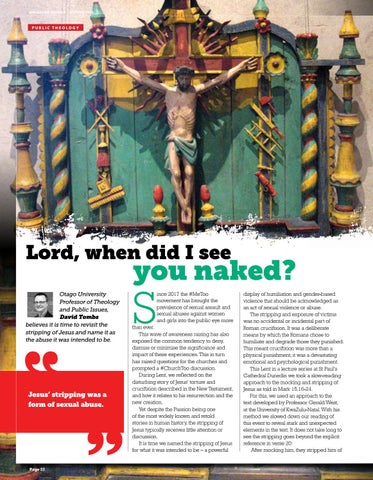 Lord, when did I see

Otago University Professor of Theology and Public Issues, David Tombs believes it is time to revisit the stripping of Jesus and name it as the abuse it was intended to be.

than ever. This wave of awareness raising has also exposed the common tendency to deny, dismiss or minimise the significance and impact of these experiences. This in turn has raised questions for the churches and prompted a #ChurchToo discussion. During Lent, we reflected on the disturbing story of Jesus' torture and crucifixion described in the New Testament, and how it relates to his resurrection and the new creation. Yet despite the Passion being one of the most widely known and retold stories in human history, the stripping of Jesus typically receives little attention or discussion. It is time we named the stripping of Jesus for what it was intended to be â&#x20AC;&#x201C; a powerful

display of humiliation and gender-based violence that should be acknowledged as an act of sexual violence or abuse. The stripping and exposure of victims was no accidental or incidental part of Roman crucifixion. It was a deliberate means by which the Romans chose to humiliate and degrade those they punished. This meant crucifixion was more than a physical punishment, it was a devastating emotional and psychological punishment. This Lent in a lecture series at St Paul's Cathedral Dunedin we took a slow-reading approach to the mocking and stripping of Jesus as told in Mark 15.16-24. For this, we used an approach to the text developed by Professor Gerald West, at the University of KwaZulu-Natal. With his method we slowed down our reading of this event to reveal stark and unexpected elements in the text. It does not take long to see the stripping goes beyond the explicit reference in verse 20: After mocking him, they stripped him of Anglican Taonga is published by the Commission on Communications and distributed to all ministry units and agencies of the Anglican Church i...

Anglican Taonga is published by the Commission on Communications and distributed to all ministry units and agencies of the Anglican Church i...