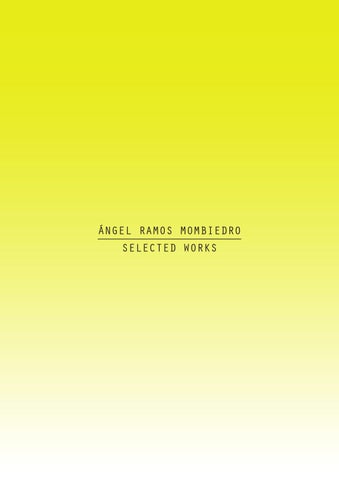 Recently graduated and licensed in Architecture at Madrid School of Architecture (ETSAM), Spain. For the last years, enjoyed the mobility grants to study in Hafencity UniversitĂ¤t Hamburg (HCU), Germany, and Escola da Cidade de Arquitetura e Urbanismo (ECAU) in SĂŁo Paulo, Brazil, attending courses in their schools of Architecture. Therefore, Spanish, Portuguese, German and English are spoken fluently. Currently working as artist assistant at Studio Isidro Blasco in New York, while collaborating as freelance architect for studio Projekt Angola. Worked in different offices of architecture, combining studies with professional experiences, as intern in CAT Arquitetura,a Brazilian studio for two semesters and in INECO Architecture department, a global leader in transport engineering and consultancy for one year. There, developed all types of architecture projects and tasks related to graphic design. Nowadays carrying out different activities related to design and architecture. Co-founder and member of Oficina Mutante Arquitectura, collective composed of architects who work with temporary installations, shops, graphic and fashion design. Interested in dealing with architecture, arts and communication as a strategic approach towards space. Inspired by distinctive aspects of every known culture with an emphasis on the own identity preservation. Well organized, working well with clients and having great people skills. Here is a brief resume of academic and professional works carried out in the last years, a compilation of my own way of working and designing. Thank you for reviewing these materials and I look forward to hearing from you.

ome regions of the north of Spain suffered the impact of coal mining on the environment, local communities and the miners themselves in last two centuries. The last environmental legislation in the European Union is cutting back on grants for coal mining from 2014 on. Those mining regions and its population have now the opportunity to change their future, making the most of their fauna and flora. In particular, the study area is located on a green valley considered a reserve thanks to its forests where the protected brown bear lives. Therefore, it is time to take advantage of its thriving environmental value considering obsolete mining industry as a sign of its past identity. The project is based on the transformation of a coal mine washing site into a Landscape Research center. The center promotes all initiatives to conserve and regenerate damaged environment and, at the same time, build up a place where dwellers can learn new professions related to environmental preservation. Transformation consists in preserving the function of the washing site as a working machine taking advantage of its huge strong industrial structure. The construction of the main building supports a hanging cloud of light platforms setting free the ground level. Damaged surrounding area is regenerated and becomes a new green link between the town and the river side. The full project has benn published. Have a look at http://www.nodopfc. blogspot.com.es/2014/10/centro-de-regeneracion-del-valle-de.html

he brief asked for a utopian creative city based on some articles about a utopian global town called New Babylon made up by the Dutch architect Constant in 1960’s. A creative city is not a strange urban place where the only creative person is its architect. In the creative city, the citizen is searching for new experiences, new places unknown till that moment, not as a mere tourist, but as a conqueror capable of acting on his own environment transforming it. For that reason, there are singular venues working as engines of inspiration. The artistic act is also a social act. Every action has simultaneous reactions till that reaction becomes into another one. Therefore, in the creative city everyone is an artist. The city could take the shape of an ascending ramp surrounding a square. This ramp would be the unpredictable promenade where some singular venues convert each one simultaneously into a sculptor, a dancer, a singer, a painter or a spectator. The ramp would start in the midst of the huge green square and it would not have end. Life is not just creativity and there would be also space for common life standing just below the creative one. It would be possible to create a two-storeys ramp. The structure would consist on a column-inclined beam system. At first, the creative city would be a perimetral ramp, becoming into an internal mesh and ending up on a global mesh as a result of its addition.

Detaill of an edge

Velux Awards is a competition of projects with a common topic: The

light, and how it can change architecture. This project is based on the light but with a new point of view; that is how to introduce the light in a buried space with an urban scale. The project is inspired in the beach, creating a space led by the atmosphere of light through water. A space to relax based on the reflections of sun light transformed by the movement of water. The combination of water and light creates a forest of funnel-shaped columns distributed in the space providing an enormous buried space. The result is a peaceful place where the bather can feel the experience of a light bathing. Together with these two immaterial elements, water and light, the new buried square establishes a new dialogue between beach and city and provides a powerful catalyst to reinvigorate the social and physical life of a citizen of Madrid.

erlin, constantlyÂ an under construction city, is a unique eclectic place where contemporary architecture merges into the historical one to reinterpret its past and consolidate its present. The project lies on a small river island close to the city center and it is a new attempt to build a church where some others were built, in different architectural styles, for ages; More concretely from the 12th century till the last one was bombed during an air raid over Berlin in 1945. The new church is contained in a perforated huge stone block surrounded by a moat. The perforated concrete block contains the atrium and the cross-shaped church. As an antâ&amp;#x20AC;&amp;#x2122;s nest, minor rooms and chapels enclose the largest rooms.Â Communal living rooms enclose the atrium and the sacred basilica, so the atrium is a place for parishioners to meet and, at the same time, be isolated from the outer city. Parishioners also get rooms and small chapels to pray and reflect alone. Mystical faint light comes into the building through wide structural walls made of glass. A 150 ft campanile lies out of the stone block, on the other side of the square. It is a new milestone in the Berliner skyline and bells on its top call parishioners everyday.

ny place at any time possesses unique inspiring aspects that aim to be captured by its observer.Â The Following pictures were taken in Brazil, Bolivia, Ecuador, Argentina, Morocco and Spain. They are just a sample of my perception of such different places and the experiences I got in an attempt to demonstrate and capture beauty at the exact moment when it is shown at its best. Everything is constantly moving but elements rarely pose for the photographer.

As a member of Oficina Mutante Arquitectura, I got deeply involved in

the development of two projects, in which I collaborated from the concept design to the construction phase. The first project consists on designing and elaborating bags and accessories for POL (pol-dsgn.com) for the winter collection Kalos inspired by the kaleidoscope and its geometry. The collection was presented in the EGO Young Talent Contest during the Mercedes- Benz Fashion Week Madrid. The second project was a temporary installation in collaboration with Abreviado&amp;Co for a pop up store in a room of an under refurbishment building. Inspired by scaffoldings around buildings, the scenography took that structure into the room to support and assemble the store.

Bags and accesories for Kalos Collection by POL

Temporary installation for a pop up store by Abreviado&amp;Co 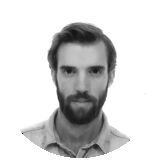