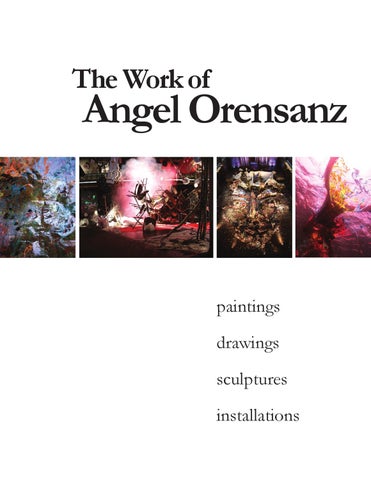 Angel Orensanz In the 1980â&#x20AC;&#x2122;s Angel Orensanz arrived in New York City and opened his studio on Norfolk Street in the Lower East Side. He has since used the space to develop major installation concepts for environmental shows such as when he performed in Holland Park, London; Red Square, Moscow; Roppongi-Park and Senso-ji Temple, Tokyo; the Brandenburg Gate, Berlin; and the ABC Playground, New York City. Since the early 60â&#x20AC;&#x2122;s Angel has been developing a prolific body of work in performance, conceptual art, and video. His pieces often carry a marked political and social commentary that is reinforced by a very personal, poetic language. The concepts he elaborates on include themes such as energy, memory, risk, compromise, will, universality, and enthusiasm. To depict them he often uses contradictions like chiaroscuro/color, death/birth, and baroque/minimalism. Angel places his audience in front of these striking contradictions and asks them to eschew standard academic conventions and vocabulary. The active spectatorâ&#x20AC;&#x2122;s role is to reconcile the dissociative entities linked to each other by the artist. Angel is an artist who utilizes the moment. Like the impressionists, he seizes the exclusivity of the instant and plays with everything he can to extract from it. It is through these artistic endeavors that he reveals the truth beyond contradictions and finds what is hidden behind what is apparent.

Matter/Light 23 The Abyss of the Gulf

Upon returning to New York City in September 2012, Angel Orensanz

presented his Burning Bronzes, a show centered around four newly created bronze sculptures. Each bronze varies in size â&#x20AC;&#x201C; from 14 x 5 x 6 in to 7 x 4 x 5 in. Each bronze was crafted with care, yet they are not smooth as one might expect, but riddled with little grooves and indents which show that they are crafted by human hands. Two of the bronzes are of hands reaching out and grasping for something or someone. In contrast, the other two bronzes depict a man on a horse (El Cid) and a group of people pushing against an unknown force (Bodies). The meanings to each bronze are up to the onlooker, as with most art. However the four can be viewed as interconnected. The two hands reach towards the sky while the Bodies push against an unseen force and the soldier in El Cid is poised; perhaps the bronzes present the idea of preparing for a war. Who can say but the artist himself ?

Angel has created numerous series of art, and perhaps one of his more

intriguing collections would be his Body Series. Done on paper with graphite, the 23 x 17in pieces depict at least one human figure. Unlike most portraits of the human body, however, Angelâ&#x20AC;&#x2122;s bodies are presented with flowing, at times squiggly, lines that seem to connect with one another. One would think, as a result, that this would lead to a bit of difficulty in telling the figures apart. That is not the case however; as Angel manages to create distinct breaks between the various human figures. From the image of a face staring off to the side, to the bodies reaching skyward, the Body Series is a striking series of portraits, all seemingly interconnected and yet separate; much like the flowing but distinct style in which Angel drew them.

abstract paintings. Done in mixed media on gouache, the subject matter of each canvas is up to the eye of the beholder. The Blue Abstract, for instance, depicts a face. However, the face can only really be seen when looking at it dead on. The other works, like the Green Abstract, do not necessarily depict anything but can be perceived as many things. That is the beauty of Angelâ&#x20AC;&#x2122;s abstract paintings. They present the viewer with countless of different interpretations, no one being the correct answer. Alongside its bright coloring, the abstract paintings present a treat for the onlooker.

Besides his various installations, Angel might best be known for his metal

sculptures, particularly his totems. Most of his totems are installations, placed throughout numerous cities and landscapes. Each of his totems are similar, but different, holding a multicultural influence. The totems are made out of metal, with pieces cut out and other portions welded to stick up. This is the same style in which Angel has created numerous other metal sculptures. The painted Metal squares each have portions cut out, in a way reminiscent of a snowflake, but also in a way similar to the totems. Similarly, Angelâ&#x20AC;&#x2122;s Sphere of the world features people popping out of the otherwise smooth looking metal. These forms are welded outwards, all but emerging from the metal globe that Angel has crafted. All his metal sculptures follow a similar style of cuts and welding, but also hold a multicultural influence that is seemingly timeless.

Each of Angelâ&#x20AC;&#x2122;s Matter/Light paintings are very unique to the artist, both in

how they are created and how they are presented. The works themselves are printed onto a clear material with vibrant colors and strong brush strokes that catch the eye of people passing by. Once complete they are mounted into light boxes, allowing the work to be projected for the onlookers passing by. Due to the clear canvases, however, this allows Angel to do quite an interesting thing. He is able to remove them from the light boxes, taking them to wherever he would like. This allows the pieces to have varying backgrounds; from black tops to grass to street lights. Angel has portrayed his clear paintings with numerous backgrounds that often lead to stark contrasts, and no piece has had the same background. While his paintings may generally be presented within the light boxes that has never stopped Angel from snapping photos of them in different locations.

The Abyss of the Gulf

Angelâ&#x20AC;&#x2122;s installations have always been a breathtakingly unique, and powerful

in their messages. Perhaps even more breathtaking though is when he has taken his installations and put them underwater. His underwater installations have a haunting sense of beauty, like a world forgotten beneath the surface. By using strategically placed items like dolls or a guitar the haunting nature is exemplified, telling a story without that being the artistâ&#x20AC;&#x2122;s true intention. Also distinctive of the underwater installations is the photographs taken during them. In some, Angel is able to go into the water, sometimes with a partially painted but otherwise clear tarp. The images documented create a surreal atmosphere, which only add to the beauty.

The Abyss of the Gulf Compilation of various submerged objects 2010

Displaying his work in public has always been something Angel enjoys. His

public art installations vary in materials â&#x20AC;&#x201C; sometimes they are colorful circles and other times fabrics tied together. These installations are ones meant for all to enjoy, often placed in locations that people will pass through. Children are able to throw the colorful Frisbees back and forth (perhaps at time with Angel himself) while others can just immerse themselves in a different world that he has created. These installations all are temporary, springing up almost overnight and surprising people who simply were passing through on their way to work or school.

Lower East Side of New York, there have been numerous installations set up inside the building. From his interpretation of the Sistine Chapel (The Floating Sistine Chapel) to a haunting face crafted out of flowers and flames (The Titanic that never reached New York) each of the indoor installations that have filled the high lofted ceilings of the former synagogue have been magnificent works of art. Many times there is a surreality of being able to walk through them, but also an emotional charge. This emotional charge changes from installation to installation. For some of them it is the utter awe of the grandness, while others cause a sense of bittersweetness.

2000 Residency at the Jewish Museum in Rendsburg; Kiel, Germany.

Prints by Orensanz purchased by the Biblioteca Nacional de España for the collection of Masters of Drawing and Prints; Madrid, Spain.

The Garden Before the Serpent; Dag Hammarskjöld Plaza in New York City, NY.

2012 Sphere at the Olympics; London, England

Installation; The University of Barcelona, Spain. 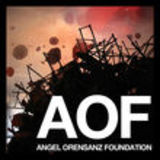