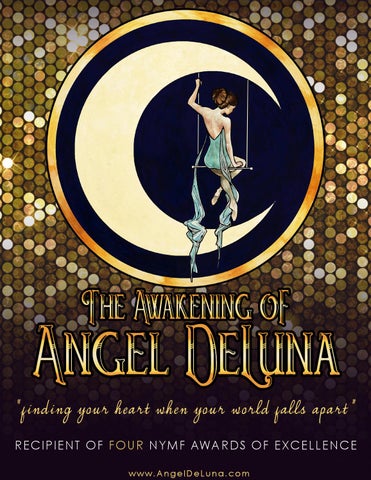 Welcome to the show! Welcome to the magical world of The Awakening of Angel DeLuna, a new circus musical produced by Angel Wings NYC. Currently, Angel Wings NYC is seeking producing partners to help bring this charming circus musical to Broadway audiences and beyond. With twenty original songs, a provocative love story, and spectacular circus acts, The Awakening of Angel DeLuna is ready to take the theater and circus world by storm!

Synopsis Ex-trapeze star Angel DeLuna has lovingly tended The Center of The Universe, her familyâ&amp;#x20AC;&amp;#x2122;s carousel, for years after a tragic fall and the disappearance of her partner. Lost in a magical world, she confides in the brass angels that adorn her carousel roof, her dream of flying once again with Monticello. Through a case of mistaken identity, she comes to believe that Mike, a visiting antique dealer, is the Archangel Michael who has arrived at the circus to grant her a miracle. Angel is about to discover the grim reality that Deuce, the circus barker, has sold off her carousel in order to make way for a penny arcade. Worse yet, he has enlisted the help of her nephew Freddy to take the carousel apart. In the desperate times of the Great Depression, Deuce plots to throw her out of the circus on her birthday, when her contract expires. Hope arrives in the form of a hobo clown, Ollie Blatsky. Ollie is secretly her long-lost trapeze love who abandoned her so many years ago. Hiding his shame behind his painted clown disguise, Ollie must hold Angelâ&amp;#x20AC;&amp;#x2122;s fragile world together as her carousel world comes crashing down.

The Circus Musical: A New Genre Broadway’s got a new kid in town – The Circus Musical! With the arrival of the Tony Award winning Pippin’, the buzz is all about the added wow factor circus acts can bring to theater. As our story takes place in a 1930’s vintage circus, incredible circus acts are intrinsically woven into the production, creating a magical theatrical experience.

With each production we are finding that there are unlimited circus possibilities. Our cast is comprised of five musical theater actors with a supporting ensemble of any number of circus performers.

endorsements A very impressive piece of work. A compelling story, full-bodied characters and a wonderfully varied, melodic score. This show has real, tangible, concrete possibilities. This one is really special. An Invigorating entertainment that is going to speak to a wide variety of people. Both deeply moving and all together delightful. Hugh Hayes, Tony Award Winning Producer, Pippin’ I found Angel DeLuna beautiful, nostalgic, and heartwarminga simple story with a melodic score that draws you in and touches the heart - a piece that resonates in the best traditions of the American Musical. Larry Hochman, Tony Award-winning orchestrator of The Book of Mormon I had a wonderful and unexpected experience at The Awakening of Angel DeLuna. Magic was in the air. The show had an uplifting message combining hope with the excitement of a circus. The music was so unforgettable that I still can’t get it out of my mind. The show is destined for greatness. Max Rossman, Director Cherry Hills Theatre Denver Colorado The show is literally like a two ring circus- both circus and musical... I found the story both strong and affecting, with a simplicity that’s both rare and hard to achieve (which is probably why it’s rare). A sweet and refreshing innocence pervades the whole. And one can almost smell the sawdust. Trav S.D., NYC Playwright, critic, author, journalist and pioneer of the New Vaudeville Movement

endorsements Theatre-goers should rejoice for The Awakening of Angel DeLuna… I can see a future where The Awakening of Angel DeLuna is performed on Broadway… I was flabbergasted by the level of craftsmanship that has gone into this musical... and it ends with cheers and tears… Gary Zeidner, Boulder Weekly I believe deeply in the necessity of the new musical and this piece really does have great commercial appeal while still holding all the integrity of good art. This is a very worthy endeavor. Tracy Bersley, Professor of Drama at Princeton and Julliard The show brings to life a powerful love story happening inside of the magical world of vintage circus. It has everything you dream of when you go see musical theater: gorgeous music, beautiful theatrical spectacle, and a story that will touch your heart. West Hyler, Director of The Awakening of Angel DeLuna 2013 What you have here is a big oldfashioned musical that will leave the audience with a song in its heart and a tear in its eye! Congratulations on a bright and very enjoyable production! Jack Finlaw, Founder of Opera Colorado

endorsements The Awakening of Angel DeLuna is a very entertaining story that brings great music and the visual artistry of aerialists into a timeless story that identifies and affirms the enduring nature of true and abiding love. Judylynn Schmidt and Lee Ellis have created a wonderful theatrical experience that several generations can enjoy together and talk about afterwards. I highly recommend this work as an entertainment experience that families, couples, and anybody who has fallen in love should all see! Leslie K. Hodge, Cannes Winning Executive Producer - “Hark” I loved working as music director and orchestrator on the score for The Awakening of Angel DeLuna. I found the music both tuneful and passionate and incorporating a delightful variety of styles. As a whole, the show’s magical circus atmosphere is large scale yet manages to convey a very intimate heart. Larry Pressgrove- Musical Director and Orchestrator I honestly don’t recall a show that drew such passionate praise from audience members before. People truly were moved by the performance! Joan Cheng, The Dairy Center for the Arts The Awakening of Angel DeLuna stirs up a beautiful blend of circus, music, lyrics and love into a delectable experience! Karen McCarty, Creative Director of Big Apple Circus

Above: Tanya Gagné and Aidan O’Shea

Moving Forward We invite you to join us on our journey to Broadway! The showâ&amp;#x20AC;&amp;#x2122;s circus world can expand to include additional circus acts, opening the piece to endless possibilities. We envision The Awakening of Angel DeLuna being performed on world class stages on Broadway, the West End, Las Vegas and in international tours. The vintage circus visuals hold incredible possibilities for film as well. We are more than happy to discuss possible scenarios and partnerships with you. For more information, email AngelWingsNYC@gmail.com or visit www.AngelDeLuna.com Vimeo link to three minute teaser from 2013 The New York Musical Theatre Festival http://vimeo.com/70961309 Weblink to six demo songs with our cast from 2013 The New York Musical Theatre Festival https://soundcloud.com/angel-deluna-musical/sets/the-awakening-of-angel-deluna

The Press kit for the Newest Circus Musical