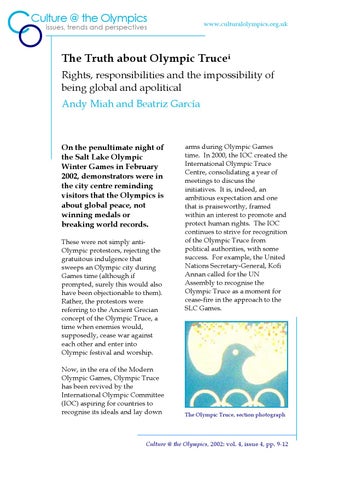 The Truth about Olympic Trucei Rights, responsibilities and the impossibility of being global and apolitical Andy Miah and Beatriz GarcĂ­a

On the penultimate night of the Salt Lake Olympic Winter Games in February 2002, demonstrators were in the city centre reminding visitors that the Olympics is about global peace, not winning medals or breaking world records. These were not simply antiOlympic protestors, rejecting the gratuitous indulgence that sweeps an Olympic city during Games time (although if prompted, surely this would also have been objectionable to them). Rather, the protestors were referring to the Ancient Grecian concept of the Olympic Truce, a time when enemies would, supposedly, cease war against each other and enter into Olympic festival and worship. Now, in the era of the Modern Olympic Games, Olympic Truce has been revived by the International Olympic Committee (IOC) aspiring for countries to recognise its ideals and lay down

arms during Olympic Games time. In 2000, the IOC created the International Olympic Truce Centre, consolidating a year of meetings to discuss the initiatives. It is, indeed, an ambitious expectation and one that is praiseworthy, framed within an interest to promote and protect human rights. The IOC continues to strive for recognition of the Olympic Truce from political authorities, with some success. For example, the United Nations Secretary-General, Kofi Annan called for the UN Assembly to recognise the Olympic Truce as a moment for cease-fire in the approach to the SLC Games.

In the wake of September 11, the SLC Games were a particularly pertinent moment to assess the weight of such an initiative to further global peace for a variety of reasons. The SLC Games is the first Games since September 11, 2001 and is uniquely placed due to the overwhelming shadow of success from Sydney 2000. As well, these Games were to be held in one of the most politically controversial countries of the world at this particular moment, the United States of America.

[the 2002] Games were to be held in one of the most politically controversial countries of the world This political controversy would be furthered when, upon being requested by the IOC President Jacques Rogge to cease fire in Afghanistan, US President George W. Bush flatly refused. As well, in the Opening Ceremony of the SLC Games, the Salt Lake Organising Committee (SLOC) used the tattered US flag found among the rubble of the World Trade Centre after September 11. This flag, which had become iconic of the USA’s triumph over disaster and the violent terrorism it has suffered some months before, was now part of a ceremony that is supposed to be premised upon peace.

Given the social significance of the opening ceremony of the Olympic Games, this was an important statement from the US to the rest of the world and one that, arguably, ought not to have been made so boldly. Notably, the IOC, having control over some formal aspects of the ceremony, refused the use of the flag in the Athlete’s Parade of Nations, where a chosen athlete leads their country into the main stadium and, perhaps, into the global combat of Olympic competition. Such occurrences reveal the inherent contradiction or, at least, tension within which the Olympic Movement finds itself – seeking non-governmental status from organisations such as the United Nations, but continuing to court political statements in its manifestation. Indeed, the SLC Games was not the first occasion when the importance of politics has overshadowed competition. In Sydney 2000, one of the most memorable moments was in the Opening Ceremony, where North and South Korea would enter the stadium marching under the same flag. Thirty two years earlier in the Mexico Olympics of 1968, black American athletes Tommie Smith and John Carlos protested the treatment of black Americans by raising black-gloved hands on Miah and García, 2002: Olympic truce

their medal podium, in a statement of black power and unity. In a moment of being cheered by their idolising supporters, they were also decrying the government that presides over them. Most recently, the IOC and the ideals of the Olympic Movement in general have raised controversy in relation to the awarding of the 2008 Olympic Summer Games to Beijing, China. Protests have already been made throughout the world as to how it is possible for a country with such an inadequate regard for human rights, to be awarded the privilege of hosting an event, the ideals of which are premised upon individual liberty. All this, when the IOC was still under fire for its culture of corruption, relating to the SLC bidding process â&#x20AC;&#x201C; of which one of the most senior IOC executive members, Chinese Kim Un Yong, was implicated. In Salt Lake City, protestors questioned whether the 2002 Games had been a hypocritical media event, as the US continues its assault on Afghanistan despite the Olympics taking place. In one respect, it has been fortunate that it is the Winter Games taking place now rather than the Summer. Had it been the Summer Games in the US so soon after September 11, the greater number of Middle Eastern countries might have challenged the viability of the Games rather

more substantially. The pressure on the US to have a cease-fire might have been much greater. As it is, very few countries competing in the Salt Lake Games have any serious political implication with the Afghanistan situation that is counter to the US approach. The protestors are seeking an end to the war in Afghanistan and want answers from the US government about September 11. They stand in the name of Truth and Peace, claiming that this is what the Games should be about. Olympic Truce, as the International Olympic Committee (IOC) officially calls it, is an international movement within the Olympics. The concept has been revitalised by the IOC for the first time since the beginning of the Modern Olympic Games in 1999 with the support of the United Nations. Despite a strong presence at the Sydney 2000 Olympic ceremonies, its success and capability is in question. The IOC continues to strive for apolitical credibility, though Olympic Truce seems to contradict this possibility. Perhaps Olympic Truce worked 3000 years ago, when the Olympic Games consisted only of Grecian competitors, who shared religious and cultural values. However, in the modern Olympic Games, the breadth of values, beliefs, and religious affiliations makes it far more complicated to

build a common basis for laying down arms. Taken out of context, it would be nice if the Olympic Movement was apolitical, but since it is hosted within countries of varying location, this is a quite untenable possibility. For example, the continual assault on Afghanistan during the months of Ramadan makes a mockery of

any IOC bid for the US government to cease-fire during the Games. What is needed is a rethinking of the meaning of an Olympic Truce. It cannot be solely a Games time aspiration for ceasing wars. Serious commitment to long-term peace solutions is what is required, not a regaling of antiquity about how good things used to be.

This paper was originally published as: The Truth About Olympic Truce, Human Rights Tribune, vol.9, No.1. (Spring 2002) 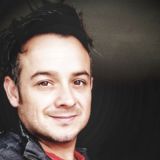 Essay about the Olympic Truce

Essay about the Olympic Truce