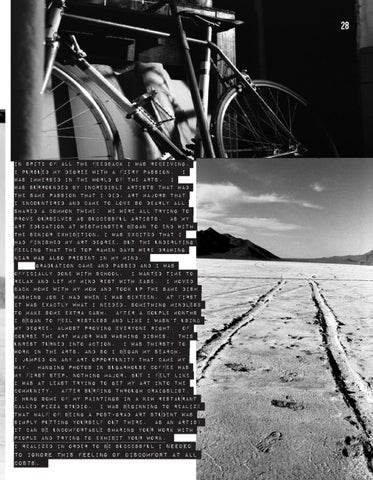 In spite of all the feedback I was receiving, I pursued my degree with a fiery passion. I was immersed in the world of the arts. I was surrounded by incredible artists that had the same passion that I did. Art majors that I encountered and came to love so dearly all shared a common theme: we were all trying to prove ourselves as successful artists. As my art education at Westminster began to end with The Senior Exhibition, I was excited that I had finished my art degree, but the underlying feeling that the Top Ramen days were drawing near was also present in my mind. Graduation came and passed and I was officially done with school. I wanted time to relax and let my mind rest with ease. I moved back home with my mom and took up the same dish washing job I had when I was sixteen. At first it was exactly what I needed, something mindless to make some extra cash. After a couple months I began to feel restless and like I wasnâ&amp;#x20AC;&amp;#x2122;t using my degree, almost proving everyone right. Of course the art major was washing dishes. This unrest turned into action. I was thirsty to work in the arts, and so I began my search. I jumped on any art opportunity that came my way. Hanging photos in Sugarhouse Coffee was my first step, nothing major, but I felt like I was at least trying to get my art into the community. After surfing through Craigslist, I hung some of my paintings in a new restaurant called Pizza Studio. I was beginning to realize that half of being a post-grad art student was simply putting yourself out there. As an artist it can be uncomfortable sharing your work with people and trying to exhibit your work. I realized in order to be successful I needed

to ignore this feeling of discomfort at all costs. 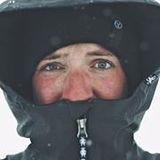