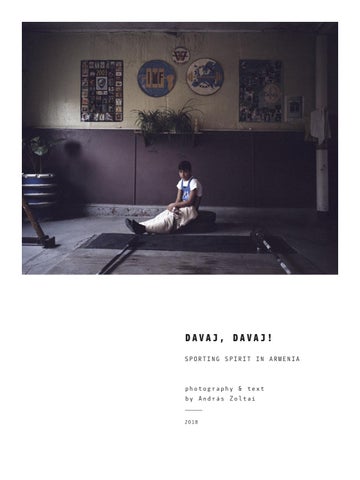 fighting for success. The

patriotism through these sport

of a nation’s identity,

winner takes it all – personal

especially for a poor and

respect, and most of all,

glory for the nation of

In fact, the tragic history

and those who emigrated –

sports such as wrestling,

won a total of 88 medals

Practically, they must fight

in the history of modern

remained the most practised

until the last breath in

sports to keep their nation

reasons, they could not always

rising even in hard times.

represent Armenia as a nation.

support dried out for a while,

Sports also offer the only

Most of the medals enriched

but – as usual – Armenians

chance to break out from

the collection of the Soviet

did not give up the fight.

poverty for the impoverished

Union. The sporting life of

living on the periphery

the region was very vibrant

those days and influenced by

and 1 silver medals, while

methods have not changed

sports programs. As part of the

since the Soviet era; yet

in wrestling for independent

Armenian nation could only

Sports have always been

in the country, so children

life and give vision to the

usually have to struggle and

realized the importance of

to gain the recognition

of society. The mix of

to invest in rebuilding

of the Armenian nation has

rewards are also offered to

an amplifying effect on

international champions by the

A boy is warming up his leg muscles

after his round on a regional

as an extra motivational

a symbol of national pride.

factor. On the other hand,

Gagik Xacikyan, multiple youth champion of athletics, is waiting for his daily training in one of the oldest gyms named after the two times Olympic Champion, Albert Azaryan.

Warming-up in the former school of the Olympic Champion, Artur Aleksanyan. Gyumri is a city with great sports traditions. Locals say that champions from Gyumri are successful and strong because of fresh air coming from 2000m highland.

A bunch of kids arrive for training in an old Lada. Their trainer, Gagik Xegiazaryan, collected them at different points of the village and drove them to the sports complex.

Children usually start training at an early age and are very enthusiastic while listening to their coach. The village Ararat is quite famous of its box club.

Coaches usually work in small groups in order to pay closer attention to the youngsters. They usually spend all day in the gym. Ashot Gasparyan, senior coach at Albert Azaryan Gymnastic School is showing them how to do an exercise correctly.

Weightlifting is one of the most popular sports in Armenia with deep traditions. In the absence of a heating system, they insulated the gymâ&#x20AC;&#x2122;s wall with a piece of foil. Cold weather would not deter kids from daily training.

Weightlifters rolling a piece of truck tire at Spartak Sport School, one of the oldest facilities in the country.

Locals attend every regional championship to see unforgettable moments and cheer for their friends and family members. The most rewarding moment is when kids win medals in front of their beloved ones.

Next to the Nuclear Power Plant of the country, Metsamor Sport Complex was supposed to be built as the center of sport in 1980. After the collapse of the Soviet Union, the government changed plans, and built another Olympic complex in Tsaghkadzor. The complex has not been renovated since. However, trainings never stopped.

Artak Eremean has been a wrestling coach for 16 years in one of the youth schools of Armavir. His wrestler son was named after his good friend, Aristak Xazaryan, the founder of the school who passed away recently. Artak carries on the traditions and keeps fighting for the success of local children.

Thousands of Armenian pumped these irons, including Artur Aleksanyan, who grew up and trained here before winning gold medal in wrestling at the Rio Olympics.

Preparing for box training on the corridor of Ararat Box Club.

The Albert Azaryan Gymnastic School received new equipments every year during the Soviet era. Special attention was paid to the development of gymnastics. Today, they still use their old, worn out equipments. Athletes keep training, without ever complaining about the circumstances.

A coach checks the weight of his students the day before of the championship.

In rural areas trainings are the only community programs after school.

In Noragavit Fencing School most students do not have their own gear. They come for practice and take whatever is available. A girl is waiting for her turn due to lack of ĂŠpĂŠes.

also use uniforms that were

donated from abroad and swap them after every match so everyone can wear them. Fencing is kind of popular amongst girls.

Armenia Sports Union, formerly known as Spartak, is one of the first sports associations in Yerevan mainly involved in individual Olympic sports. It has an outdoor pitch filled with students everyday.

Competitions are crucial for cadets. It is their opportunity to be noticed by coaches of the National Team. They take it very seriously and fight for their last breath.

The jury and sportmates are watching a young athlete during his pommel horse exercise.

The training methods are sometimes very painful. Children wait patiently for their trainer to stretch their legs out in Vanadzor.

The relationship between coach and athletes are very strict and similar to a father-son relationship. They meet each other every day, and the coach usually accompany children throughout their careers. To teach a very talented athlete and win medals with him/her gives the opportunity to step up to the next level of hierarchy.

An abandoned trainerâ&#x20AC;&#x2122;s office in Etchmiadzin Youth Sports School is a good example of how urgent development needs to be done in order to support potential Armenian athletes in their future careers.

A poster introduces the fragments of sports memories in Armavir. For Armenian families the greatest pride can be a medal that a child brings home.

The heritage of Soviet times still permeates the air at the sport school named after Norayr Mushegyan who was the first Armenian freestyle wrestler winning the World Championship in 1958. A painting of a military general has been hanging on the wall for ages, watching the struggle of the next generation.

A boxer after losing a match at the annually held National Box Championship in Dynamo Sport Club.

Almost in every town you can find the Olympic sign that proudly proclaims the success of Armenian sport culture. 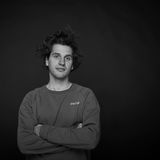 SPORTING SPIRIT IN ARMENIA photography and text by András Zoltai 2018

SPORTING SPIRIT IN ARMENIA photography and text by András Zoltai 2018