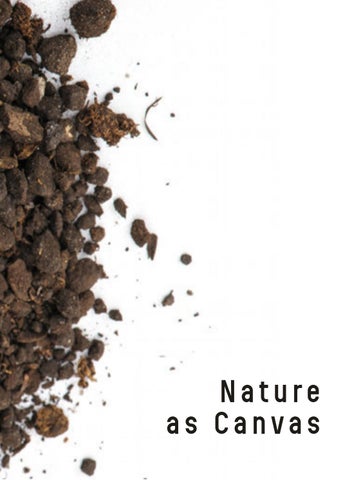 Copyright ÂŠ Andie Bush All rights reserved. No part of this publication may be reproduced, stored in a retrieval system, or transmitted in any form or by any means, whether electronic or mechanical, including photocopying, recording, or otherwise, without the prior permission in writing of the publisher. Andy Goldsworthy: Projects Isbn: 978-4197-2222-6 Library of Congress Control Number: 2016960258 Simon Beck: Snow Artist Isbn: 978-2-35640-123-6 Nature as a Canvas Andie Bush Photographers/Artists: Andy Goldsworthy, Simon Beck, Walter Mason

â&amp;#x20AC;&amp;#x153;Learning and understanding through touch and making is a simple but deeply important reason for doing my work.â&amp;#x20AC;?

work. He enjoys the process of making each piece,

and environmentalist who uses natural materials to

because he learns something new and creates a diﬀerent

emphasize the beauty and the unknown of nature.

relationship with nature for every sculpture. He looks

Goldsworthy was born in Sales in the North of England.

at the opportunities the day brings – is it raining? Is

At age thirteen, his family moved to the suburbs of

it snowing? – and how he can use these materials to

Leeds where he began to work as a laborer on nearby

discover something new about nature. The environment

farms. He loved working in the fields - he found it

is his classroom, his place to learn. Each work is a

soothing, and almost therapeutic. A lot of his work

discovery. Goldsworthy wants to not just use a rock and

included picking potato’s where the movement was

be done with it, but to understand the rock, where the

repetitive, consistent, and one that had rhythm. He

rock came from, the processes the rock is involved in,

eventually left to study fine arts at Bradford College of

and what happens when he parts ways with the rock.

Art and preceded to further his education at Preston Polytechnic. Now, he creates work unlike any other

Even though is work is photographed, Goldsworthy

artistic pieces – his work is not to be exhibited or sold. It

attempts to showcase the various parts of environmental

is to show the understanding that nothing is eternal and

cycles, and photograph them at the height when

the world is full of continually changing processes.

they are the most alive. He emphasizes movement, change, light, growth, decay, as the energies of nature.

If one is lucky enough to witness the work of

Nature is constantly changing and that is something

Goldsworthy, his work is art that will impact you.

that is embraced through his art. He strives to create

However, since his work is ephemeral, photographs are

pieces that are sensitive and alert to the cycles of the

the primary way to see it. There are numerous points

environment and changes in material, season and

that Goldsworthy is attempting to convey through his

â&amp;#x20AC;&amp;#x153;I stop at a place or pick up a material because I feel that there is something to be discovered. Here is where I can learn.â&amp;#x20AC;?

â&amp;#x20AC;&amp;#x153;Each work grows, stays, decays. Process and decay are implicit. Transience in my work reflects what I find in nature.â&amp;#x20AC;?

â&amp;#x20AC;&amp;#x153;Movement, change, light, growth and decay are the lifeblood of nature, the energies that I I try to tap through my work.â&amp;#x20AC;?

“I think that, thanks to civilization’s progress, nature can seen quite remote, and I think that most people miss it in some way, even if they don’t realize it themselves.”

Walter Mason is a German artist who examines the

relationship between the world and natural materials

can change how we look at the work but taking into

by pulling them apart and putting them back together.

account what we take for granted in nature. Additionally,

when we are distracted by a big city, and wrapped up

in the South East of England. The small and close-knit

in the distractions of everyday life, nature can seem like

community valued and immersed themselves in nature.

something that is out of reach. Mason pushes people

Even in his childhood he always preferred the fragility

and calmness of nature to the excitement of a big city.

Masonsâ&amp;#x20AC;&amp;#x2122; time based artwork strives to highlight the

Similar to a lot of artists, Masons tries to communicate

fragility and beauty of nature. He attempts to capture

through his artwork. Unlike a lot of nature-based artists,

unique moments in nature that are often times

Mason does not strive to create work that depicts the

worsening state of the environment. It is not a call for

primarily focuses on the transitions from season to

help. Additionally, he likes to minimize the amount of

season revealing the unique quality and features that

meaning he puts behind each piece in fear that if he

coincide with each one. When its winter, it is hard to

waits to look, his idea will die. He captures his work

imagine what the same landscape will look for summer.

through photographs with the idea that the viewer will

Seasons are unstable and the moments Mason captures

are supposed to be a reminder of that. For Mason,

that Mason was experiencing at the time he made it.

â&amp;#x20AC;&amp;#x153;I think seasons can help remind us how unstable everything really is.â&amp;#x20AC;?

â&amp;#x20AC;&amp;#x153;Land art is similar to surrealism insofar as that it can change how we look at the world by questioning what we usually take for granted.â&amp;#x20AC;?

with just his feet? Typically, Beck has the design thought

out in his head - for more complex designs he uses

he had pursued a career in his own field. Yet, he always

paper and pen. He begins by using snow shoes and

held a passion for drawing geometric shapes. He was

never fully content with his career. His career as a snow

snow. Typically he starts with one main circle, and adds

artist began as a joke when he was playing and drawing

smaller circles around the edges. If he walks along the

in the snow after a day of skiing. He soon came to the

line twice, he gets a nice smooth boundary. This process

realization that his passion was coming to life. In 2009,

his feet issues were worsening, and he decided to pursue these designs in the snow as alternative form of

The idea behind creating work that will disappear within

exercise to running. His collection of photographs grew,

hours can be hard to understand. For Simon Beck, it is

which he would edit and in Photoshop. Through his art,

part of the beauty and appeal for his creations. Nature

Beck felt like he was becoming an active member who

allows him to have a blank canvas, to create more work,

was contributing to society. He felt and still feels valued.

and to give back to society.

So how does he create such perfect geometric shapes

â&amp;#x20AC;&amp;#x153;I always wanted to be outdoors, playing soccer, climbing trees, running through the woods and hiking to the top of every hill in sight. And there was always that special attraction of snow.â&amp;#x20AC;?

“ I just love snow. I love its texture. I love the sound it makes. I love the look of it, especially when the sun is shining on it. And the best thing with snow, is that it’s free!” 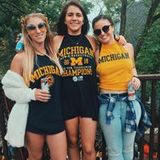