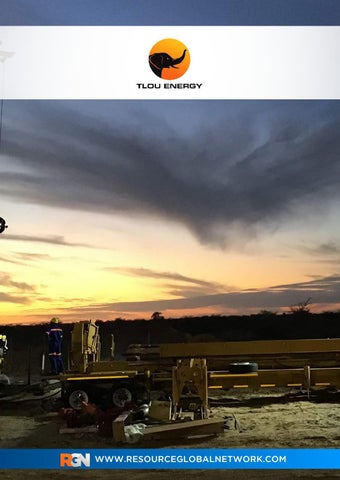 Tony Gilby is a founding member of onshore gas exploration and power generation company Tlou Energy, which was established after his previous firm Sunshine Gas was taken over by BG Group in 2008. In the wake of the Sunshine Gas deal, Gilby and his team began searching for new opportunities in the gas business around the world, and soon become interested in Botswana. Now CEO and MD of Tlou, Gilby says that diamond rich Botswana ticked all the boxes for an appropriate investment jurisdiction. “Botswana had the right geology, the right regulatory regime and was generally a good place to invest. That’s why we chose Botswana many years ago.” Since then, Tlou has embarked on a mission to become an independent producer of sustainable power, thereby easing energy supply concerns in Botswana and the Southern Africa region. In 2009, Tlou commenced exploration activity in Botswana and began prefeasibility drilling at its Lesedi coalbed methane (CBM) project in 2011, before listing on the ASX in 2013. Two years later, Tlou dual listed on the AIM, with Gilby citing

Resource Global Network a greater understanding of African markets amongst the London investor as the chief reason. Tlou then made a third listing on an international exchange in 2017, this time turning to the domestic market in Botswana. â&#x20AC;&#x153;We listed on the BSE because we wanted to allow Botswana-based funds to invest in the company,â&#x20AC;? says Gilby.

Independently certified gas Another significant milestone was achieved in 2016 when Tlou achieved the first independently certified gas reserves from CBM in Botswana, which have since been estimated at up to 3.2 trillion cubic feet (tcf). CBM is a form of natural gas extracted from underground coal seams. The gas freely flows to the surface once the naturally occurring water pressure from within the coal is reduced by pumping. Tlouâ&#x20AC;&#x2122;s aim is to turn its extensive gas reserves at Lesedi into a source of reliable, clean power for a region which is struggling to meet increasing energy demand. The Southern African Development Community (SADC) unites approximately 342 million people from 16 countries into one intergovernmental body and also provides a common power grid for much of the region, which is maintained by the Southern African Power Pool (SAPP) - a cooperation of national electricity companies from SADC.

However, the majority of SAPP’s energy is

The Australian company believes the market

for its CBM product in Botswana could

Eskom, which puts the entire region in a

potentially be huge, particularly as it can

position of energy insecurity, including

as diesel and coal, with the former being imported at a high cost.

“Botswana relies very heavily on energy coming from Eskom over the border. That

puts them in a very exposed position, as any

Eskom wobbles will impact the country’s

it a much cleaner option,” Gilby states. “It

imports, with more than 50% of its power

security, along with a significant local power

that struggles to produce efficient electrical

source of electricity from its Lesedi project, which will incorporate a gas-to-power station

After producing first power from the site

connecting with the national grid and the

adjacent to the Lesedi gas reserves in 2017,

OIL & GAS | Tlou Energy Tlou received a request for the supply of up to 100MW of CBM from the government of Botswana, in a clear indication that the project is a central part of plans to expand and diversify the country’s energy mix. Prior to this government tender, Tlou became the first company in Botswana to be granted a mining licence for a CBM project and was also the first to be awarded with an environmental impact statement for a project of this type in the country. “Environmental regulations in Botswana are very strict and very comprehensive. It took over two years to get our environmental impact statement approved,” Gilby reveals.

“These wells are located in a very favourable

and utilised our international experience

geological environment for gas. Secondly, its

in drilling for hydrocarbons in an

located next to our central gas processing

Tlou’s extraction method centres on the

use of dual lateral pods, each comprising one vertical and two horizontal wells to pull

The company has proposed a staged

development starting with up to 10MW of

generation that targets first revenue while

Having already produced power from gas

facility. The recently drilled wells are

wells at Lesedi in 2017, the company recently

expected to be sufficient for the first 2MW of

located in an area that has been identified for initial project development.

The Expertise To Meet Every Challenge. Experts in gas fueled solutions

As a global leader in power generation for

responsible and economical power. At Cummins,

we answer the challenge, whether it’s for a prime, standby, peaking, cogeneration or waste-to-energy

presence and cutting-edge power technology allows you to deliver what you need, wherever you

project for any application – oil, mining or gas, data

need it, through a single proven power partner. And

centers, telecoms or manufacturing, commercial or

we back what we do with a real understanding of

industrial operations. At the heart of our solutions are Cummins lean-burn gas fueled generator sets.

the issues confronting today’s power operators, such as the need to comply with ever-stricter emissions legislation and to control costs while improving productivity. What’s more, our services are backed by exceptional support from Cummins worldwide service network. With thousands of locations extending across 190 countries, quality service and trusted expertise is available whenever and wherever you need it, in every corner of the globe.

With individual power ratings of up to 2 MW, these robust generators burn natural gas or a range of alternative gaseous fuels, delivering reliable, costreducing and energy-saving power that conforms to emissions standards worldwide. Along with our specialist expertise, it’s everything you need to fulﬁl the most demanding power project, regardless of its scale, location or environment.

In addition, Tlou has also planned for the

the downstream facilities, with landholder

integration of a solar facility at the Lesedi

approval also required in that process. All of

project. “The concept is that an additional

solar plant could be bolted on at little additional capex, and it would become an

“The next step is to finalise our PPA/tender

interesting demonstration plant for gas and

with the Botswana government. We are

looking at joining the SAPP as an independent producer in any event, and one of those two

“We’re very excited about the possibility of

needs to come to fruition in order for us to

producing solar energy combined with the

base load/peaking potential of our gas,” adds

and exporting it to the SAPP.”

the CEO and MD. Tlou is also exploring other potential At the time of writing, Tlou is in the process

workstreams for its CBM product, which is a

of having the dual lateral pods dewatered

highly versatile gas that can be used across

at Lesedi, after which the wells will reach

many industries, including in petrochemicals

gas flow point in the coming months. Once

and fertiliser and ammonia production.

they are up and running, Tlou hopes to

“With enough gas reserves, ammonia and

and growing economy provided a compelling

fertiliser are real possibilities further down

business and investment case. But, the

the track, along with petrochemicals,” Gilby

benefits of its Lesedi CBM project will not

be confined to the company’s shareholders, instead they will be spread around Botswana

“However, our near term and primary

and the SADC region.

objective is still to convert our gas to electricity, join the power grid approximately

“The real benefit for Botswana can be

Serowe, and then be able to supply electricity

to Botswana and the SAPP.”

Despite the completion of the 600MW Morupule B Power Station, Botswana is still

Tlou chose to invest in Botswana over a

vulnerable to rolling blackouts and over-

decade ago because its stable government

reliant on electricity from a faltering Eskom,

which means that energy security remains a

“In relation to jobs, a stable, clean source

primary concern across the nation.

of energy encourages a healthy business environment and attracts broader

investment in a country. A positive business

contribute to greater energy security, while

and investment community creates much

also playing a major role in the government’s

This is the crux of Tlou’s promise through its

in the coming years.