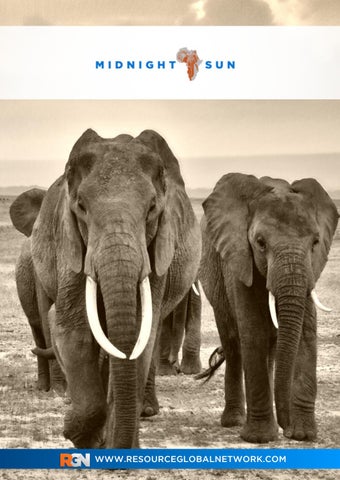 Midnight Sun Mining is a postdiscovery stage copper-cobalt exploration company with a 60% interest in the Solwezi group of licences located in Zambia’s North-Western Province. The Solwezi licences consist of two individual exploration licences covering 506 km² immediately adjacent to First Quantum Minerals’ (FQM) Kansanshi Mine – the largest copper mining complex in Africa, with resources greater than one billion tonnes. “Our philosophy was twofold,” explains Midnight Sun’s lead director and acting CEO Al Fabbro. “First and foremost, we liked the jurisdiction of Zambia. Second, we liked the infrastructure already provided by FQM’s Kansanshi Mine. As a junior, it gave us optionality on the assumption that we made a discovery.”

A copper mining haven Zambia’s mining industry has been an investor-favourite in Southern Africa since the industry was first opened to private venture in the late 1990s. The twin pillars of peace and democracy have remained a near-constant since Zambia gained independence from Britain

Resource Global Network in 1964 and have been a key reason behind the country’s continued attractiveness as an investment destination, particularly in the mining sector. The mineral prize that lies at the heart of Zambia’s investment appeal is copper, which is mostly found in the Central African Copperbelt straddling the border between the Southern region of DRC and Northern Zambia, where there is even a province named after the prolific Copperbelt. Since the privatisation of the mining sector, Zambia’s copper production has skyrocketed from 300,000 metric tonnes per year to 800,000 at the end of 2017, making it Africa’s second largest copper producer behind only neighbouring DRC. In fact, copper has a huge impact on the fortunes of Zambia as a country and its people, according to Fabbro. “Copper is the dominant industry here and accounts for about 85% of the country’s exports and the majority of its revenues.” The robust Zambian copper industry has enticed a host of major mining companies to set up exploration projects in the Copperbelt, including the likes of Barrick Gold, Rio Tinto, Glencore, Ivanhoe Mines and FQM. Many of these have gone on to build large-scale copper production complexes across the region, however rumblings of discontent have begun to emanate from these international mining houses after the

mining industry. We are making investments

with horizons of sometimes 40 years or more, but governments tend to change the

At the start of 2019, the government raised

goal posts depending on which way the wind

its sliding scale for royalties from 4% to 6%

and introduced a new 10% tax when the price of copper exceeds US$7,500 per tonne.

“Having said that, I think the Zambian

tax with a sales tax by April to help reduce a

copper is and they are starting to realise

that if they encourage the development of new mines, they will generate much greater

Speaking on the subject of tax, Fabbro

tax revenues than by changing what’s been

explains that this type of action is common

successful in the past.”

in all jurisdictions not just Zambia: “I live in British Columbia, Canada and it feels like our

government changes the goal posts for the

legislative changes in the Zambian mining sector, instead placing increased faith in the

“It’s one the greatest challenges facing the

a region which has been christened the ‘new

staked around by MMG and Rio Tinto based

Copperbelt’ by many enthusiastic exploration

on our discovery, which shows there is a

keen interest from majors on the ground we are working on. We think the land we hold is

The Solwezi licences are located within 10 km

of FQM’s Kansanshi Mining Complex, only 60 km from Barrick Gold’s Lumwana Mine

After carrying out geochemical and

and concentrator and a further 120 km from

another FQM asset - the Sentinel Mine.

This glut of high quality copper mines in the

region not only offers a strong testament to

and Khaziba. In the last 12 months, the

the glittering potential of the Solwezi licences,

company has predominantly focused on 22

but also provides a strong infrastructure

network that Midnight Sun can leverage off, as previously alluded to by Fabbro.

“There are some really nice mines in the

oxide in drill holes and made a significant

drill discovery of 11.3 metres at a grade of

“First and foremost, we liked the jurisdiction of Zambia. Second, we liked the infrastructure already provided by FQM’s Kansanshi Mine” Al Fabbro, acting CEO and lead director

5.71% copper. However, Fabbro admits that

to date this near surface mineralisation lacks

into the target to see what it looks and

continuity, which was also incidentally a

based on the results work from there. If it’s

feature of early exploration on the Kansanshi

another Kansanshi, it’s a company maker,” he

Meanwhile, the Mitu target has yielded a

holes at the surface, but the analogy is more

copper-cobalt discovery in ore shales to

like a buried Kansanshi. There seems to be a

the far North of the known Mitu trend.

geophysical target down at 250 metres that

mineralisation including an 11.6 metres

cobalt. The Mitu discovery was made after a

While the company had been focused on

very subtle soil anomaly was detected by a

the Northern part of Mitu, they have also

“We got a couple of drill hits up there and

deposit. “The geophysics has really told

stayed focused on the area, tracking the

a compelling story. One of the priorities

of this year is to test targets identified by

metres of potential dip and widths look to be about 10 metres. Based on drilling done to date we are seeing roughly 1% copper equivalent.”

A big year ahead Over the course of 2019, Midnight Sun will

dive deeper into the geophysics at Mitu and

the structural controls of the mineralisation

select the three best drill targets in order to

yet. We thought at first it was the ore shales

results can be confirmed, then it will modify

alone that controlled mineralisation, but

plans for progressing the target to suit the

recent results have shown there are other

Resource Global Network Midnight Sun has also identified a new potential zone located between Mitu and 22 Zone that looks very attractive, according to Fabbro. “We are going do some work there aimed at developing drill targets as a third priority behind Mitu and 22 Zone.” Casting his eyes towards the horizon, Fabbro maintains a flexible stance on the prospect of Midnight Sun ultimately developing a copper mine on the Solwezi licences. “If we do get to a production decision, we recognise we would have to bring in a whole set of people with different skillsets, which is definitely achievable. “However, our intention is to create an asset that a senior mining company would want to own. Ultimately our goal is to maximise the value to Midnight Sun and its shareholders, whatever form that takes.” Returning to the present, Midnight Sun’s acting CEO concludes by reasserting his confidence in Zambia’s new Copperbelt region. “With a bit of luck, we could be the story of the year for 2019.” If the deposits surrounding the Solwezi licences are anything “Once we learn and understand the structural

to go by, this could well be the case.

control, we will be more comfortable at Mitu and I think the geophysics will really help. One of the first steps in proving an ore body is understanding the structural controls,” Fabbro reasons.