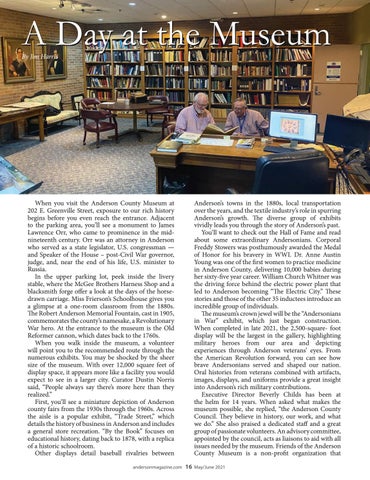 A Day at the Museum

When you visit the Anderson County Museum at 202 E. Greenville Street, exposure to our rich history begins before you even reach the entrance. Adjacent to the parking area, you’ll see a monument to James Lawrence Orr, who came to prominence in the midnineteenth century. Orr was an attorney in Anderson who served as a state legislator, U.S. congressman — and Speaker of the House – post-Civil War governor, judge, and, near the end of his life, U.S. minister to Russia. In the upper parking lot, peek inside the livery stable, where the McGee Brothers Harness Shop and a blacksmith forge offer a look at the days of the horsedrawn carriage. Miss Frierson’s Schoolhouse gives you a glimpse at a one-room classroom from the 1880s. The Robert Anderson Memorial Fountain, cast in 1905, commemorates the county’s namesake, a Revolutionary War hero. At the entrance to the museum is the Old Reformer cannon, which dates back to the 1760s. When you walk inside the museum, a volunteer will point you to the recommended route through the numerous exhibits. You may be shocked by the sheer size of the museum. With over 12,000 square feet of display space, it appears more like a facility you would expect to see in a larger city. Curator Dustin Norris said, “People always say there’s more here than they realized.” First, you’ll see a miniature depiction of Anderson county fairs from the 1930s through the 1960s. Across the aisle is a popular exhibit, “Trade Street,” which details the history of business in Anderson and includes a general store recreation. “By the Book” focuses on educational history, dating back to 1878, with a replica of a historic schoolroom. Other displays detail baseball rivalries between andersonmagazine.com

Anderson’s towns in the 1880s, local transportation over the years, and the textile industry’s role in spurring Anderson’s growth. The diverse group of exhibits vividly leads you through the story of Anderson’s past. You’ll want to check out the Hall of Fame and read about some extraordinary Andersonians. Corporal Freddy Stowers was posthumously awarded the Medal of Honor for his bravery in WWI. Dr. Anne Austin Young was one of the first women to practice medicine in Anderson County, delivering 10,000 babies during her sixty-five year career. William Church Whitner was the driving force behind the electric power plant that led to Anderson becoming “The Electric City.” These stories and those of the other 35 inductees introduce an incredible group of individuals. The museum’s crown jewel will be the “Andersonians in War” exhibit, which just began construction. When completed in late 2021, the 2,500-square- foot display will be the largest in the gallery, highlighting military heroes from our area and depicting experiences through Anderson veterans’ eyes. From the American Revolution forward, you can see how brave Andersonians served and shaped our nation. Oral histories from veterans combined with artifacts, images, displays, and uniforms provide a great insight into Anderson’s rich military contributions. Executive Director Beverly Childs has been at the helm for 14 years. When asked what makes the museum possible, she replied, “the Anderson County Council. They believe in history, our work, and what we do.” She also praised a dedicated staff and a great group of passionate volunteers. An advisory committee, appointed by the council, acts as liaisons to aid with all issues needed by the museum. Friends of the Anderson County Museum is a non-profit organization that 16 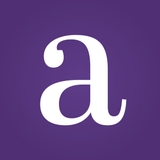