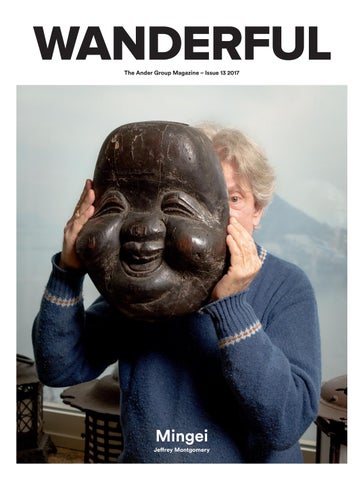 “In Japan, the heart of a house is its hearth, where the family gathers around the eternal source of warmth and food. Every object connected with it, even the simple pot-hanger, reflects the importance, almost the sacredness, of these human needs and relations.”

Jeffrey's Montgomery Collection, a passion for Japanese Folk Art "Mingei" , where common objects were “made for use, not display, but glowing with a quiet yet overwhelming beauty”.

“To see, in one thing, ten thousand things” “To see, in one thing, ten thousand things:” the Japanese proverb sums up in a single phrase both the country’s aesthetic tradition of refined, discreet beauty – and the collector’s informed and passionate vision. Jeffrey Montgomery has spent a lifetime seeking for those special objects in which you can see ten thousand more – the pieces that resonate across time and space, linking the viewer with the spirits of their long-dead makers and owners. “They have been handled, lovingly held by so many, lovingly repaired; they have been used through the ages and survived. How could that not give them more energy?” Starting at the age of 12 from a chance encounter with a beautiful piece of translucent porcelain, Montgomery has gradually built up the most complete collection of Japanese folk art, or mingei, outside of Japan. Paintings, sculpture, ceramics, lacquerware, masks, tools, furniture, textiles… all made for use not display, but glowing with a quiet yet overwhelming beauty. What had been a personal passion – a “love affair,” as he puts it – has led Montgomery to gather together some 900 objects spanning more than five thousand years of history. Coming face-to-face with the collection in Montgomery’s Lugano apartment is the opposite of the regimented formality of most museum exhibitions: it is like meeting an extended family. On an old merchant’s chest, a pair of lion-dog masks smile their welcome; a plump carp ruffles its tail in greeting; a mottled green vase invites you to look ever more closely, until your

eye is passing over its surface like a satellite over a new-discovered planet. And presiding over it all, assisted by his dignified poodle Rupert, is the gentle, smiling curator – Montgomery himself. In Japan, the heart of a house is its hearth, where the family gathers around the eternal source of warmth and food. Every object connected with it, even the simple pot-hanger, reflects the importance, almost the sacredness, of these human needs and relations. In Montgomery’s home, the collection is the hearth, creating an atmosphere at once humble and exalted. The character of the pieces, of their makers, and of their collector are merged. “I started collecting for my own joy, in all areas. It has been a glorious journey, with permanent inquisitiveness helped by wonderful people. I’ve been so fortunate – I feel that I have been able to advance like an intrepid fox: learning more, feeling more at every moment.” The fox’s journey has led to unexpected places: in [1987], the world-famous yet local architect Mario Botta built a gallery into the bank headquarters

he was designing, and pieces from Montgomery’s collection found themselves on public show for the first time. “I saw my objects in a totally different light. I wondered about these things that I saw there in the case, the formal relations between them – and the whole game changed. I said to myself ‘All right, Jeffrey; you’re now a real collector.’ I became serious where before I had been instinctive.” The Montgomery Collection has since travelled to museums overseas and been the subject of books, articles, and news stories. And in the autumn of 2019, it will be shown again in the villa-museum commemorating the sculptor Vincenzo Vela, in the country town of Ligornetto. It will feel at home here, with the place’s combination of high art and the timeless tasks of agriculture and rural housekeeping. Now that the collection is “serious,” rather than “instinctive,” it poses the question: what exactly is mingei? What defines this combination of domestic usefulness and supreme craftsmanship? The word was coined by the art theorist and social critic

Yanagi Sōetsu in the 1920s, under the influence of William Morris, the English founder of the Arts and Crafts movement. Its aim was to reveal and celebrate the artistic qualities of domestic objects, as well as to preserve precious techniques that might be lost in the rush of industrialisation and commercial production. This was a shared concern between East and West, and the influence worked both ways: some of the most famous European producers of art ceramics came to learn from the rural craftspeople that Yanagi had first brought to public notice. Yet on the other side, mingei is a misleading term, since the Japanese traditionally made no distinction between “high” and “low” in art: everything is potentially a work of art. Its qualities are simply a matter of care, judgement, experience, and love. Perhaps Montgomery puts it best when he describes how he judges whether to add a piece to his collection: “It has to have that moment when it leaves you… spellbound.” He looks spellbound now, lovingly holding in his hands a Tokoname vase that is eight centuries old,

its ruddy surface marked by the years, like the face of an old friend. He speaks quietly: “You can never say that you are the owner of something that comes down to you through the centuries – and that you hope to pass on. You are the fortunate keeper of it – the trustee.” In the traditional tea ceremony, Japanese take this feeling of trusteeship to the extent of “waking up” treasured cups before use, and slowing their actions to “say goodbye” to each lovely utensil before putting it away. By such acts of mindful attention, we slow time, invest our surroundings with love, and draw support from the love with which each thing was made: ephemeral, delicate… yet timeless and strong as the earth.

The Wanderful Take: Stop Time “Timeless beauty” isn’t just a phrase – a lovely object, or image, or idea can stop the clocks and drown out the babble of the minute with the serene silence of the ages. Jeffrey Montgomery is, as he says, “a fortunate person”. But we are more fortunate in that he has assembled this silent choir of beautiful things. His efforts over decades provide us with moments of enlightenment. We see – then we understand. And it is Wanderful.

On the pine needles, each of the slender needles, a dewdrop rests â&#x20AC;&#x201D; a thousand pearls lie quivering, yet never fall.