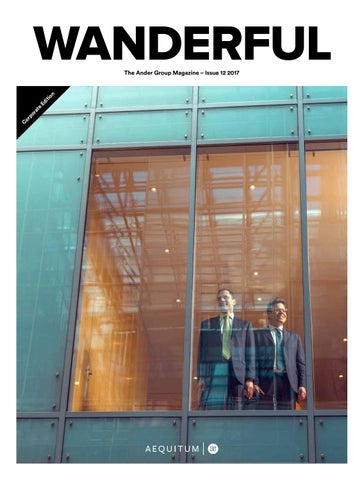 Working with technology shouldn’t make us less human. Hardware, software, and services can become obsolete in a matter of months, but the values on which we depend for our happiness – values like trust, sympathy, helpfulness – remain the same across generations. In this issue, Marco Comini and Gianmaria Bernasconi, the founders of Aequitum, tell us how technology is transforming wealth management… and how they put the human element back at the center of attention. What’s true for wealth management is true for every business, including ours: the technology is an enabling tool, but the medium is not the message. The goal is connecting two human brains – and hearts – in a fruitful exchange. At Ander Group, everything we do is aimed toward that moment of connection.

From Fintech to Fintrust Aequitum introduces a new paradigm for wealth management: state-of-the-art technology in the service of old-fashioned human values.

Softly-spoken and with perfect manners, the two men don’t seem like revolutionaries – but from their elegant office in the middle of Lugano, Marco Comini and Gianmaria Bernasconi of Aequitum are preparing to turn the world of wealth management upside down. “Wealth management is obsolete in its traditional sense,” says Comini, “because of technology.” He speaks from experience: he and Bernasconi had a combined thirty years as fund and wealth managers in the Swiss financial industry before leaving a primary private banking institution last year to start their own business. “Technology has completely disrupted the banking sector,” agrees Bernasconi. “Banks were simply unprepared to pass on to their customers the flexibility and low cost that fintech makes possible. And after the 2008 crisis, banks have been concentrating so hard on capitalization and compliance that they have forgotten the real source of their revenue: the client.” Enter Aequitum. Neither purely a wealth manager nor purely a family office, it offers clients the global, low-cost, and transparent (and therefore lower risk) investment opportunities made possible by financial technology, with an added layer of professional services and family-centered advice.

It offers clients the global, low-cost, and transparent (and therefore lower risk) investment opportunities. “Families need to protect and pass on wealth – but wealth isn’t only financial,” explains Comini. “We see our role as a family counsellor, helping to preserve and build value through the generations by managing relations with financial institutions.” The name “Aequitum” reflects that role: nurturing mutual trust through fair dealing and equitable participation. “Human relationships will never disappear,” adds Bernasconi. “Financial advice is not like trading: it can’t be delivered by artificial intelligence, because its real value comes from trust, goodwill, personal knowledge. These are the foundations of our business.”

Such strong foundations support fast growth: in the few months since its launch, Aequitum has attracted the vast majority of the client base that Bernasconi and Comini served as bankers. “It is a relief, for them and for us,” says Bernasconi: “They know we are completely independent. We can be flexible, and can take full responsibility. In a bank, you don’t know whether the client is attracted by the institution or the individual. Here, we know it is because of the way we personally live up to our philosophy.” That philosophy includes clarity in charging, with advice billed as a separate service, instead of the traditional reliance on commissions from transactions. “The whole focus of the relationship is trust. We can’t just say ‘Oh, this investment passes the regulatory profile for this client – I’ll recommend it;’ we need to make a personal commitment to understanding all the interests and needs of the family,” says Comini. “Our clients may soon be able to do all the transactional part of managing their portfolios themselves,” adds Bernasconi. “We don’t want to compete with the technology, but to add the essential human component, the emotional understanding.”

The openness of Aequitum’s model also extends to the professional services it arranges for clients, who can meet directly with a trusted selection of legal and other experts to discuss their needs. Leopards do not usually change their spots, so how is it that two highly experienced bankers have decided to overthrow wealth management’s traditionally highcost and low-service model? Perhaps because of their pre-bank experience: both have degrees in Political Science – Comini worked in government and managed funds before turning to the wealth management side. Bernasconi was an intern in the Swiss diplomatic service and worked with NGOs before entering banking.

There is a lot more to the world than just money.

Financial advice is not like trading: it canâ&#x20AC;&#x2122;t be delivered by artificial intelligence because its real value comes from trust, goodwill, personal knowledge. These are the foundations of our business.

We donâ&#x20AC;&#x2122;t want to compete with the technology, but to add the essential human component, the emotional understanding.

“I think it gives us a wider understanding of risk and value,” says Comini. “I have seen many technical experts in banking who are devoted to a particular fund or asset class, yet don’t really connect to the opportunity or risk it represents to the investor in the real world. Aequitum translates between those two world views.” Bernasconi takes this point further: “There is a lot more to the world than just money. As we saw in 2016, political, regulatory, macro changes can have broad repercussions – something that an investment algorithm knows nothing about. We bring that wider perspective.” And when they’re not working – what inspires them? “It may sound strange,” says Bernasconi, “but we are inspired by the same thing outside the office as in it: family. We are both devoted to bringing up our children, passing on values and culture, giving them an education about life – normal, everyday life. And life isn’t just about money.” Comini adds, “I also love sailing, especially in the Mediterranean… but there I’m also thinking about the way families move into the future. It’s all navigation, choosing a direction and keeping to it, adjusting for the changing winds and currents. And every boat handles differently, just as every family is different.”

Looking around the office as we speak, it is impossible to miss the colourful, exciting artwork that lines the walls, including a remarkable three-dimensional construction. Again, not what people expect from a solid Swiss financial institution… so is it simply personal taste? Or is there a message? “We’ve come this far with just two people,” says Comini, “but we are going to grow. We want to make it clear that Aequitum is a philosophy that goes beyond just Gianmaria and Marco. We are building something for the future: a way of doing business based on relationships and trust. We want to inspire, not just by performance, but by ideas and vision – so the art reminds us that life is colourful and three-dimensional, with different facets, depending on which side you see it from. Like us, it is open… not flat.”

It’s all navigation, choosing a direction and keeping to it.

In this world, everything has to be paid for. The future may be unknown, but it still requires expert, careful planning to provide for a family in the next generation. But life is never just about money â&#x20AC;&#x201C; and the two founders of Aequitum teach us that it is value, not simply cash, that we are seeking to preserve and pass on. To achieve that needs a cool head and a warm heart, realising that time taken in personal contact, establishing trust and understanding, is never wasted. Thatâ&#x20AC;&#x2122;s a Wanderful way to invest!

It can be this simple.