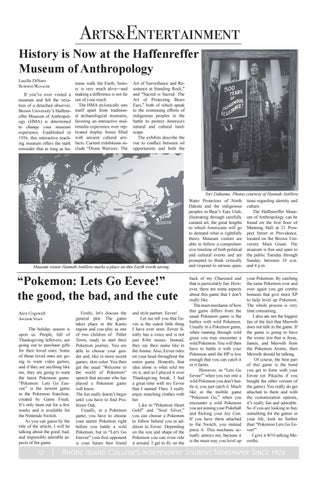 Arts&amp;Entertainment History is Now at the Haffenreffer Museum of Anthropology Lucille DiNaro Business Manager If you’ve ever visited a museum and felt the vexation of a detached observer, Brown University’s Haffenreffer Museum of Anthropology (HMA) is determined to change your museum experience. Established in 1956, this interactive teaching museum offers the stark reminder that as long as hu-

mans walk the Earth, history is very much alive—and making a difference is not far out of your reach. The HMA stylistically sets itself apart from traditional archaeological museums, favoring an interactive multimedia experience over replicated display boxes filled with ancient cultural artifacts. Current exhibitions include “Drone Warriors: The

Art of Surveillance and Resistance at Standing Rock,” and “Sacred is Sacred: The Art of Protecting Bears Ears,” both of which speak to the continuing efforts of indigenous peoples in the battle to protect America&#39;s natural and cultural landscape. The exhibits describe the rise to conflict between oil opportunists and both the

Museum visitor Hannah Astillero marks a place on this Earth worth saving.

“Pokemon: Lets Go Eevee!” the good, the bad, and the cute Alex Cogswell Anchor Staff The holiday season is upon us. People, full of Thanksgiving leftovers, are going out to purchase gifts for their loved ones. Some of those loved ones are going to want video games, and if they are anything like me, they are going to want the latest Pokemon game. “Pokemon: Lets Go Eeevee” is the newest game in the Pokemon franchise, created by Game Freak. It’s only been out for a few weeks and is available for the Nintendo Switch. As you can guess by the title of the article, I will be talking about the good, bad, and impossibly adorable aspects of the game.

Firstly, let&#39;s discuss the general plot. The game takes place in the Kanto region and you play as one of two children of Pallet Town, ready to start their Pokemon journey. You are able to choose your gender and, like in more recent games, skin color. You then get the usual ‘Welcome to the world of Pokemon!’ speech that anyone who has played a Pokemon game will know. The fun really doesn’t begin until you have to find Professor Oak. Usually, in a Pokemon game, you have to choose your starter Pokemon right before you battle a wild Pokemon, but in “Let&#39;s Go Eeevee” your first opponent is your future best friend

and style partner: Eevee! Let me tell you that Eevee is the cutest little thing I have ever seen. Eevee finally has a voice and is not just 8-bit noises. Instead, they say their name like in the Anime. Also, Eevee rides on your head throughout the entire game. Honestly, that idea alone is what sold me on it, and as I played it over Thanksgiving break, I had a great time with my Eevee that I named Theo. I really enjoy matching clothes with her. Like in “Pokemon Heart Gold” and “Soul Silver,” you can choose a Pokemon to follow behind you in addition to Eevee. Depending on the size and shape of the Pokemon you can even ride it around. I get to fly on the

Water Protectors of North Dakota and the indigenous peoples in Bear’s Ears Utah, illustrating through carefully curated art, the great lengths to which Americans will go to demand what is rightfully theirs. Museum visitors are able to follow a comprehensive timeline of both political and cultural events and are prompted to think critically and respond to serious ques-

tions regarding identity and culture. The Haffenreffer Museum of Anthropology can be found on the first floor of Manning Hall at 21 Prospect Street in Providence, located on the Brown University Main Green. The museum is free and open to the public Tuesday through Sunday, between 10 a.m. and 4 p.m.

back of my Charizard and that is particularly fun. However, there are some aspects about this game that I don’t really like. The main mechanic of how this game differs from the usual Pokemon game is the battles with wild Pokemon. Usually in a Pokemon game, when running through wild grass you may encounter a wild Pokemon. You will then have to battle it with your Pokemon until the HP is low enough that you can catch it or it faints. However, in “Lets Go Eevee!” when you run into a wild Pokemon you don’t battle it, you just catch it. Much like in the mobile game “Pokemon Go,” when you encounter a wild Pokemon you are aiming your Pokeball and flicking your Joy Con. If you have them attached to the Switch, you instead press A. This mechanic actually annoys me, because it is the main way you level up

your Pokemon. By catching the same Pokemon over and over again you get combo bonuses that give more XP to help level up Pokemon. The whole process is very time consuming. I also am not the biggest fan of the fact that Meowth does not talk in the game. If the game is going to have the iconic trio that is Jesse, James, and Meowth from the Pokemon Anime, then Meowth should be talking. Of course, the best part of this game is the bond you get to form with your Eevee (or Pikachu if you bought the other version of the game). You really do get attached to them and with the customization options, it’s really fun and adorable. So if you are looking to buy something for the gamer in your life, look no further than “Pokemon Lets Go Eevee!” I give it 8/10 talking Meowths. 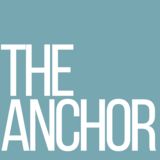