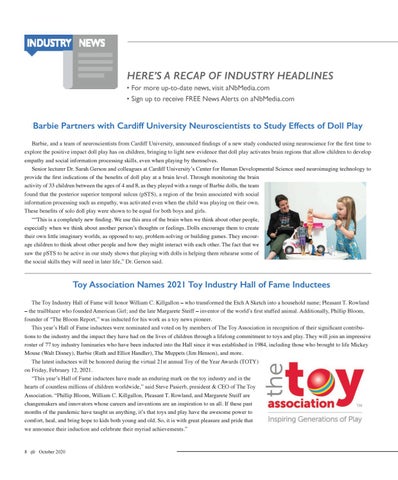 Barbie Partners with Cardiff University Neuroscientists to Study Effects of Doll Play Barbie, and a team of neuroscientists from Cardiff University, announced findings of a new study conducted using neuroscience for the first time to explore the positive impact doll play has on children, bringing to light new evidence that doll play activates brain regions that allow children to develop empathy and social information processing skills, even when playing by themselves. Senior lecturer Dr. Sarah Gerson and colleagues at Cardiff University’s Center for Human Developmental Science used neuroimaging technology to provide the first indications of the benefits of doll play at a brain level. Through monitoring the brain activity of 33 children between the ages of 4 and 8, as they played with a range of Barbie dolls, the team found that the posterior superior temporal sulcus (pSTS), a region of the brain associated with social information processing such as empathy, was activated even when the child was playing on their own. These benefits of solo doll play were shown to be equal for both boys and girls. ““This is a completely new finding. We use this area of the brain when we think about other people, especially when we think about another person’s thoughts or feelings. Dolls encourage them to create their own little imaginary worlds, as opposed to say, problem-solving or building games. They encourage children to think about other people and how they might interact with each other. The fact that we saw the pSTS to be active in our study shows that playing with dolls is helping them rehearse some of the social skills they will need in later life,” Dr. Gerson said.

Toy Association Names 2021 Toy Industry Hall of Fame Inductees The Toy Industry Hall of Fame will honor William C. Killgallon – who transformed the Etch A Sketch into a household name; Pleasant T. Rowland – the trailblazer who founded American Girl; and the late Margarete Steiff – inventor of the world’s first stuffed animal. Additionally, Phillip Bloom, founder of “The Bloom Report,” was inducted for his work as a toy news pioneer. This year’s Hall of Fame inductees were nominated and voted on by members of The Toy Association in recognition of their significant contributions to the industry and the impact they have had on the lives of children through a lifelong commitment to toys and play. They will join an impressive roster of 77 toy industry luminaries who have been inducted into the Hall since it was established in 1984, including those who brought to life Mickey Mouse (Walt Disney), Barbie (Ruth and Elliot Handler), The Muppets (Jim Henson), and more. The latest inductees will be honored during the virtual 21st annual Toy of the Year Awards (TOTY) on Friday, February 12, 2021. “This year’s Hall of Fame inductees have made an enduring mark on the toy industry and in the hearts of countless millions of children worldwide,” said Steve Pasierb, president &amp; CEO of The Toy Association. “Phillip Bloom, William C. Killgallon, Pleasant T. Rowland, and Margarete Steiff are changemakers and innovators whose careers and inventions are an inspiration to us all. If these past months of the pandemic have taught us anything, it’s that toys and play have the awesome power to comfort, heal, and bring hope to kids both young and old. So, it is with great pleasure and pride that we announce their induction and celebrate their myriad achievements.”