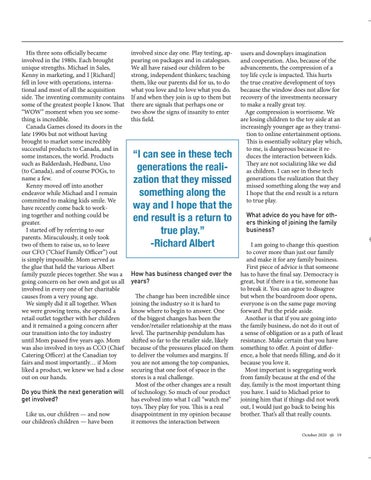 His three sons officially became involved in the 1980s. Each brought unique strengths. Michael in Sales, Kenny in marketing, and I [Richard] fell in love with operations, international and most of all the acquisition side. The inventing community contains some of the greatest people I know. That “WOW” moment when you see something is incredible. Canada Games closed its doors in the late 1990s but not without having brought to market some incredibly successful products to Canada, and in some instances, the world. Products such as Balderdash, Hedbanz, Uno (to Canada), and of course POGs, to name a few. Kenny moved off into another endeavor while Michael and I remain committed to making kids smile. We have recently come back to working together and nothing could be greater. I started off by referring to our parents. Miraculously, it only took two of them to raise us, so to leave our CFO (“Chief Family Officer”) out is simply impossible. Mom served as the glue that held the various Albert family puzzle pieces together. She was a going concern on her own and got us all involved in every one of her charitable causes from a very young age. We simply did it all together. When we were growing teens, she opened a retail outlet together with her children and it remained a going concern after our transition into the toy industry until Mom passed five years ago. Mom was also involved in toys as CCO (Chief Catering Officer) at the Canadian toy fairs and most importantly… if Mom liked a product, we knew we had a close out on our hands.

involved since day one. Play testing, appearing on packages and in catalogues. We all have raised our children to be strong, independent thinkers; teaching them, like our parents did for us, to do what you love and to love what you do. If and when they join is up to them but there are signals that perhaps one or two show the signs of insanity to enter this field.

“I can see in these tech generations the realization that they missed something along the way and I hope that the end result is a return to true play.” -Richard Albert How has business changed over the years? The change has been incredible since joining the industry so it is hard to know where to begin to answer. One of the biggest changes has been the vendor/retailer relationship at the mass level. The partnership pendulum has shifted so far to the retailer side, likely because of the pressures placed on them to deliver the volumes and margins. If you are not among the top companies, securing that one foot of space in the stores is a real challenge. Most of the other changes are a result of technology. So much of our product has evolved into what I call “watch me” toys. They play for you. This is a real disappointment in my opinion because it removes the interaction between

users and downplays imagination and cooperation. Also, because of the advancements, the compression of a toy life cycle is impacted. This hurts the true creative development of toys because the window does not allow for recovery of the investments necessary to make a really great toy. Age compression is worrisome. We are losing children to the toy aisle at an increasingly younger age as they transition to online entertainment options. This is essentially solitary play which, to me, is dangerous because it reduces the interaction between kids. They are not socializing like we did as children. I can see in these tech generations the realization that they missed something along the way and I hope that the end result is a return to true play.

What advice do you have for others thinking of joining the family business? I am going to change this question to cover more than just our family and make it for any family business. First piece of advice is that someone has to have the final say. Democracy is great, but if there is a tie, someone has to break it. You can agree to disagree but when the boardroom door opens, everyone is on the same page moving forward. Put the pride aside. Another is that if you are going into the family business, do not do it out of a sense of obligation or as a path of least resistance. Make certain that you have something to offer. A point of difference, a hole that needs filling, and do it because you love it. Most important is segregating work from family because at the end of the day, family is the most important thing you have. I said to Michael prior to joining him that if things did not work out, I would just go back to being his brother. That’s all that really counts. October 2020 tfe 19