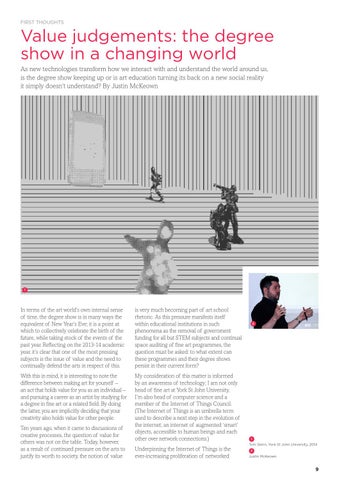 Value judgements: the degree show in a changing world As new technologies transform how we interact with and understand the world around us, is the degree show keeping up or is art education turning its back on a new social reality it simply doesn’t understand? By Justin McKeown

In terms of the art world’s own internal sense of time, the degree show is in many ways the equivalent of New Year’s Eve; it is a point at which to collectively celebrate the birth of the future, while taking stock of the events of the past year. Reflecting on the 2013-14 academic year, it’s clear that one of the most pressing subjects is the issue of value and the need to continually defend the arts in respect of this.

is very much becoming part of art school rhetoric. As this pressure manifests itself within educational institutions in such phenomena as the removal of government funding for all but STEM subjects and continual space auditing of fine art programmes, the question must be asked: to what extent can these programmes and their degree shows persist in their current form?

With this in mind, it is interesting to note the difference between making art for yourself – an act that holds value for you as an individual – and pursuing a career as an artist by studying for a degree in fine art or a related field. By doing the latter, you are implicitly deciding that your creativity also holds value for other people.

My consideration of this matter is informed by an awareness of technology; I am not only head of fine art at York St John University, I’m also head of computer science and a member of the Internet of Things Council. (The Internet of Things is an umbrella term used to describe a next step in the evolution of the internet; an internet of augmented ‘smart’ objects, accessible to human beings and each other over network connections.)

Ten years ago, when it came to discussions of creative processes, the question of value for others was not on the table. Today, however, as a result of continued pressure on the arts to justify its worth to society, the notion of value 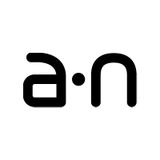 2014 Degree shows publication highlighting the best graduate art and design shows around the UK, with commentary and insight from artists, c...

2014 Degree shows publication highlighting the best graduate art and design shows around the UK, with commentary and insight from artists, c...