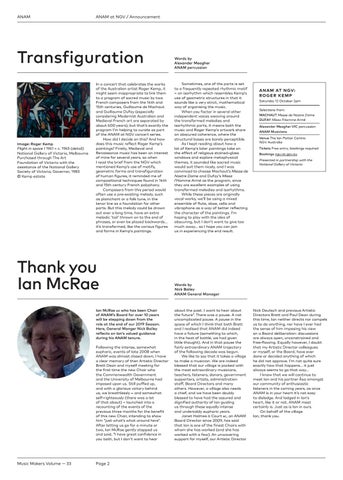 In a concert that celebrates the works of the Australian artist Roger Kemp, it might seem inappropriate to link them to a program of sacred music by two French composers from the 14th and 15th centuries, Guillaume de Machaut and Guillaume Dufay (especially considering Modernist Australian and Medieval French art are separated by about 600 years), but that’s exactly the program I’m helping to curate as part of the ANAM at NGV concert series. How did I decide on this? And how does this music reflect Roger Kemp’s paintings? Firstly, Medieval and Renaissance music has been an interest of mine for several years, so when I read the brief from the NGV which mentioned Kemp’s use of motifs, geometric forms and transfiguration of human figures, it reminded me of compositional techniques found in 14th and 15th century French polyphony. Composers from this period would often use a pre-existing melody, such as plainchant or a folk tune, in the tenor line as a foundation for other parts. But this melody could be drawn out over a long time, have an extra melodic ‘tail’ thrown on to the end of phrases, or even be played backwards… it’s transformed, like the various figures and forms in Kemp’s paintings.

Thank you Ian McRae Ian McRae AO who has been Chair of ANAM’s Board for over 10 years will be stepping down from the role at the end of our 2019 Season. Here, General Manger Nick Bailey reflects on Ian’s valued guidance during his ANAM tenure. Following the intense, somewhat euphoric, events of late 2008 when ANAM was almost closed down, I have a clear memory of then Artistic Director Brett Dean and myself meeting for the first time the new Chair who the Commonwealth Government and the University of Melbourne had imposed upon us. Still puffed up, and with a glorious victory behind us, we breathlessly – and somewhat self-righteously (there was a lot of that about) – launched into a recounting of the events of the previous three months for the benefit of this new Chair, intending to show him “just what’s what around here”. After letting us go for a minute or two, Ian McRae gently stopped us and said, “I have great confidence in you both, but I don’t want to hear

Sometimes, one of the parts is set to a frequently repeated rhythmic motif – an isorhythm which resembles Kemp’s use of geometric structures in that it sounds like a very strict, mathematical way of organising the music. When you factor in several other independent voices weaving around the transformed melodies and isorhythmic parts, it means both the music and Roger Kemp’s artwork share an obscured coherence, where the structural bases are barely perceptible. As I kept reading about how a lot of Kemp’s later paintings take on the effect of religious stained-glass windows and explore metaphysical themes, it sounded like sacred music would suit them nicely, and I was convinced to choose Machaut’s Messe de Nostre Dame and Dufay’s Missa l’Homme Armé as the program, since they are excellent examples of using transformed melodies and isorhythms. While these pieces are originally vocal works, we’ll be using a mixed ensemble of flute, oboe, cello and vibraphone as a way of better reflecting the character of the paintings. I’m hoping to play with the idea of obscuring, but I don’t want to give too much away… so I hope you can join us in experiencing the end result.

about the past. I want to hear about the future”. There was a pause. A not uncomplicated pause. A pause in the space of which I think that both Brett and I realised that ANAM did indeed have a future (something to which, in the heat of battle, we had given little thought). And in that pause the fairly extraordinary ANAM trajectory of the following decade was begun. We like to say that it takes a village to make a musician. We are indeed blessed that our village is packed with the most extraordinary musicians, teachers, listeners, donors, government supporters, artists, administration staff, Board Directors and many others. However, a village also needs a chief, and we have been doubly blessed to have had the assured and dignified authority of Ian guiding us through these equally intense and undeniably euphoric years. Janet Holmes à Court AC, an ANAM Board Director since 2009, has said that Ian is one of the finest Chairs with whom she has worked (and she has worked with a few). An unwavering support for myself, our Artistic Director

Nick Deutsch and previous Artistic Directors Brett and Paul Dean during this time, Ian neither directs nor compels us to do anything, nor have I ever had the sense of him imposing his view on a Board deliberation: discussions are always open, unconstrained and free-flowing. Equally however, I doubt that my Artistic Director colleagues or myself, or the Board, have ever done or decided anything of which he did not approve. I’m not quite sure exactly how that happens… it just always seems to go that way… I know that we will continue to meet Ian and his partner Åsa amongst our community of enthusiastic listeners in the coming years, as once ANAM is in your heart it’s not easy to dislodge. And lodged in Ian’s heart, like it or not, ANAM most certainly is. Just as is Ian in ours. On behalf of the village Ian, thank you. 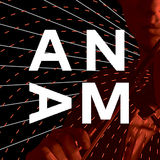 Music Makers is ANAM's newspaper featuring articles by guest artists, insights on repertoire and composers, behind the scenes snippets from...

Music Makers is ANAM's newspaper featuring articles by guest artists, insights on repertoire and composers, behind the scenes snippets from...