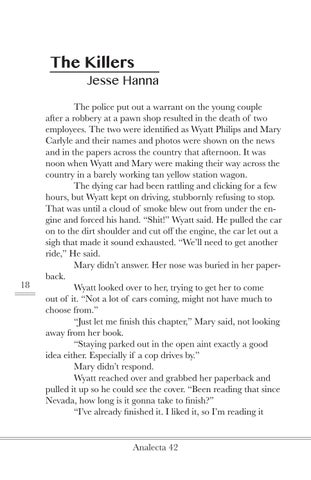 The police put out a warrant on the young couple after a robbery at a pawn shop resulted in the death of two employees. The two were identified as Wyatt Philips and Mary Carlyle and their names and photos were shown on the news and in the papers across the country that afternoon. It was noon when Wyatt and Mary were making their way across the country in a barely working tan yellow station wagon. The dying car had been rattling and clicking for a few hours, but Wyatt kept on driving, stubbornly refusing to stop. That was until a cloud of smoke blew out from under the engine and forced his hand. “Shit!” Wyatt said. He pulled the car on to the dirt shoulder and cut off the engine, the car let out a sigh that made it sound exhausted. “We’ll need to get another ride,” He said. Mary didn’t answer. Her nose was buried in her paperback. Wyatt looked over to her, trying to get her to come out of it. “Not a lot of cars coming, might not have much to choose from.” “Just let me finish this chapter,” Mary said, not looking away from her book. “Staying parked out in the open aint exactly a good idea either. Especially if a cop drives by.” Mary didn’t respond. Wyatt reached over and grabbed her paperback and pulled it up so he could see the cover. “Been reading that since Nevada, how long is it gonna take to finish?” “I’ve already finished it. I liked it, so I’m reading it Analecta 42 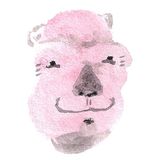 This is the 42nd edition of Analecta, published by the 2015-2016 staff. For more information about the Analecta Literary and Arts Journal,...

This is the 42nd edition of Analecta, published by the 2015-2016 staff. For more information about the Analecta Literary and Arts Journal,...