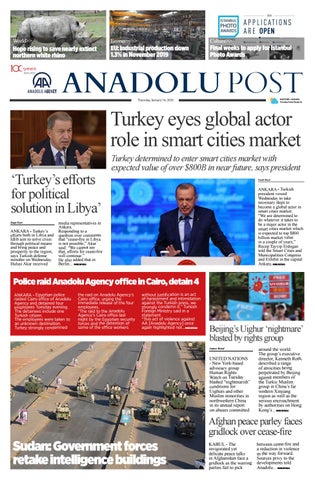 ANKARA - Turkey’s efforts both in Libya and Idlib aim to solve crisis through political means and bring peace and prosperity to the region, says Turkish defense minister on Wednesday. Hulusi Akar received

Turkey determined to enter smart cities market with expected value of over $800B in near future, says president Gozde Bayar

ANKARA - Turkish president vowed Wednesday to take necessary steps to become a global actor in smart cities market. “We are determined to do whatever it takes to be a major actor in the smart cities market which is expected to top $800 billion market value in a couple of years,” Recep Tayyip Erdogan told the Smart Cities and Municipalities Congress and Exhibit in the capital Ankara. MORE DETAILS

media representatives in Ankara. Responding to a question over comments that “cease-fire in Libya is not possible,” Akar said: “We cannot say that, efforts for cease-fire will continue.” He also added that in Berlin... MORE DETAILS

without justification is an act of harassment and intimidation against the Turkish press, we strongly condemn it,” Turkish Foreign Ministry said in a statement. “This act of violence against AA [Anadolu Agency] once again highlighted not...MORE DETAILS

around the world. The group’s executive director, Kenneth Roth, described a range of atrocities being perpetrated by Beijing against members of the Turkic Muslim group in China’s far western Xinjiang region as well as the serious encroachment by authorities on Hong Kong’s... MORE DETAILS

between cease-fire and a reduction in violence as the way forward. Sources privy to the developments told Anadolu... MORE DETAILS 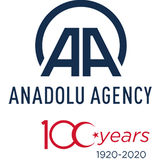 AnadoluPost is a one page digital newspaper publishing by Anadolu Agency daily.

AnadoluPost is a one page digital newspaper publishing by Anadolu Agency daily.