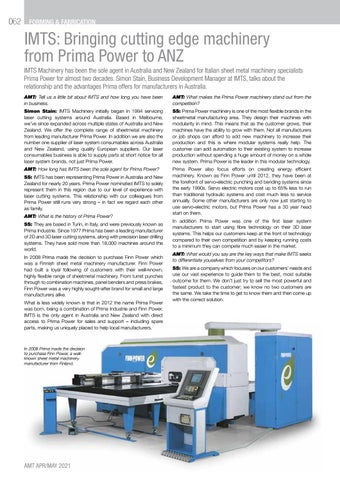 IMTS: Bringing cutting edge machinery from Prima Power to ANZ IMTS Machinery has been the sole agent in Australia and New Zealand for Italian sheet metal machinery specialists Prima Power for almost two decades. Simon Stain, Business Development Manager at IMTS, talks about the relationship and the advantages Prima offers for manufacturers in Australia. AMT: Tell us a little bit about IMTS and how long you have been in business.

AMT: What makes the Prima Power machinery stand out from the competition?

Simon Stain: IMTS Machinery initially began in 1994 servicing laser cutting systems around Australia. Based in Melbourne, we’ve since expanded across multiple states of Australia and New Zealand. We offer the complete range of sheetmetal machinery from leading manufacturer Prima Power. In addition we are also the number one supplier of laser system consumables across Australia and New Zealand, using quality European suppliers. Our laser consumables business is able to supply parts at short notice for all laser system brands, not just Prima Power.

SS: Prima Power machinery is one of the most flexible brands in the sheetmetal manufacturing area. They design their machines with modularity in mind. This means that as the customer grows, their machines have the ability to grow with them. Not all manufacturers or job shops can afford to add new machinery to increase their production and this is where modular systems really help. The customer can add automation to their existing system to increase production without spending a huge amount of money on a whole new system. Prima Power is the leader in this modular technology.

AMT: How long has IMTS been the sole agent for Prima Power?

Prima Power also focus efforts on creating energy efficient machinery. Known as Finn Power until 2012, they have been at the forefront of servo-electric punching and bending systems since the early 1990s. Servo electric motors cost up to 65% less to run than traditional hydraulic systems and cost much less to service annually. Some other manufacturers are only now just starting to use servo-electric motors, but Prima Power has a 30 year head start on them.

SS: IMTS has been representing Prima Power in Australia and New Zealand for nearly 20 years. Prima Power nominated IMTS to solely represent them in this region due to our level of experience with laser cutting systems. This relationship with our colleagues from Prima Power still runs very strong – in fact we regard each other as family. AMT: What is the history of Prima Power? SS: They are based in Turin, in Italy, and were previously known as Prima Industrie. Since 1977 Prima has been a leading manufacturer of 2D and 3D laser cutting systems, along with precision laser drilling systems. They have sold more than 18,000 machines around the world. In 2008 Prima made the decision to purchase Finn Power which was a Finnish sheet metal machinery manufacturer. Finn Power had built a loyal following of customers with their well-known, highly flexible range of sheetmetal machinery. From turret punches through to combination machines, panel benders and press brakes, Finn Power was a very highly sought-after brand for small and large manufacturers alike. What is less widely known is that in 2012 the name Prima Power was born, being a combination of Prima Industrie and Finn Power. IMTS is the only agent in Australia and New Zealand with direct access to Prima Power for sales and support – including spare parts, making us uniquely placed to help local manufacturers.

In 2008 Prima made the decision to purchase Finn Power, a wellknown sheet metal machinery manufacturer from Finland.

In addition Prima Power was one of the first laser system manufacturers to start using fibre technology on their 3D laser systems. This helps our customers keep at the front of technology compared to their own competition and by keeping running costs to a minimum they can compete much easier in the market. AMT: What would you say are the key ways that make IMTS seeks to differentiate youselves from your competitors? SS: We are a company which focuses on our customers’ needs and use our vast experience to guide them to the best, most suitable outcome for them. We don’t just try to sell the most powerful and fastest product to the customer; we know no two customers are the same. We take the time to get to know them and then come up with the correct solution. 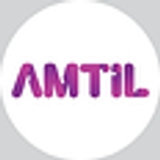