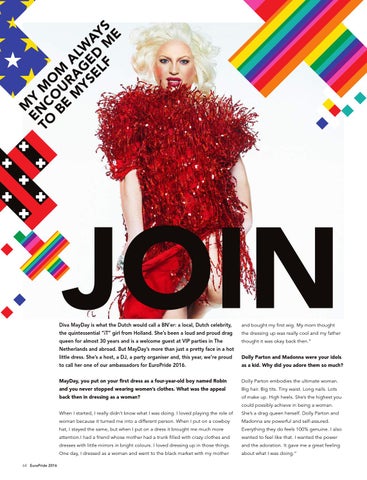 Diva MayDay is what the Dutch would call a BN’er: a local, Dutch celebrity,

and bought my first wig. My mom thought

the quintessential “iT” girl from Holland. She’s been a loud and proud drag

the dressing up was really cool and my father

thought it was okay back then.”

Netherlands and abroad. But MayDay’s more than just a pretty face in a hot little dress. She’s a host, a DJ, a party organiser and, this year, we’re proud

Dolly Parton and Madonna were your idols

to call her one of our ambassadors for EuroPride 2016.

as a kid. Why did you adore them so much?

MayDay, you put on your first dress as a four-year-old boy named Robin

and you never stopped wearing women’s clothes. What was the appeal

back then in dressing as a woman?

of make up. High heels. She’s the highest you could possibly achieve in being a woman.

When I started, I really didn’t know what I was doing. I loved playing the role of

She’s a drag queen herself. Dolly Parton and

woman because it turned me into a different person. When I put on a cowboy

Madonna are powerful and self-assured.

hat, I stayed the same, but when I put on a dress it brought me much more

Everything they do feels 100% genuine. I also

attention.I had a friend whose mother had a trunk filled with crazy clothes and

wanted to feel like that. I wanted the power

dresses with little mirrors in bright colours. I loved dressing up in those things.

and the adoration. It gave me a great feeling

One day, I dressed as a woman and went to the black market with my mother

about what I was doing.”