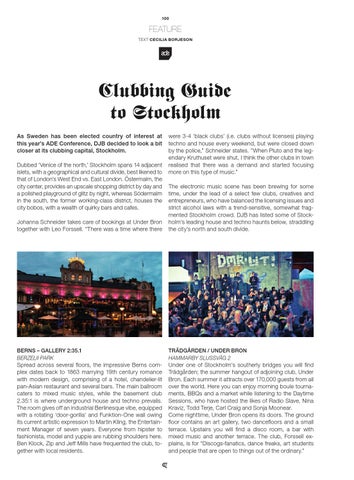 Clubbing Guide to Stockholm As Sweden has been elected country of interest at this year’s ADE Conference, DJB decided to look a bit closer at its clubbing capital, Stockholm. Dubbed ‘Venice of the north,’ Stockholm spans 14 adjacent islets, with a geographical and cultural divide, best likened to that of London’s West End vs. East London. Östermalm, the city center, provides an upscale shopping district by day and a polished playground of glitz by night, whereas Södermalm in the south, the former working-class district, houses the city bobos, with a wealth of quirky bars and cafes.

were 3-4 ‘black clubs’ (i.e. clubs without licenses) playing techno and house every weekend, but were closed down by the police,” Schneider states. ”When Pluto and the legendary Kruthuset were shut, I think the other clubs in town realised that there was a demand and started focusing more on this type of music.”

Johanna Schneider takes care of bookings at Under Bron together with Leo Forssell. “There was a time where there

The electronic music scene has been brewing for some time, under the lead of a select few clubs, creatives and entrepreneurs, who have balanced the licensing issues and strict alcohol laws with a trend-sensitive, somewhat fragmented Stockholm crowd. DJB has listed some of Stockholm’s leading house and techno haunts below, straddling the city’s north and south divide.

Spread across several floors, the impressive Berns complex dates back to 1863 marrying 19th century romance with modern design, comprising of a hotel, chandelier-lit pan-Asian restaurant and several bars. The main ballroom caters to mixed music styles, while the basement club 2.35:1 is where underground house and techno prevails. The room gives off an industrial Berlinesque vibe, equipped with a rotating ‘door-gorilla’ and Funktion-One wall owing its current artistic expression to Martin Kling, the Entertainment Manager of seven years. Everyone from hipster to fashionista, model and yuppie are rubbing shoulders here. Ben Klock, Zip and Jeff Mills have frequented the club, together with local residents.

Under one of Stockholm’s southerly bridges you will find Trädgården; the summer hangout of adjoining club, Under Bron. Each summer it attracts over 170,000 guests from all over the world. Here you can enjoy morning boule tournaments, BBQs and a market while listening to the Daytime Sessions, who have hosted the likes of Radio Slave, Nina Kraviz, Todd Terje, Carl Craig and Sonja Moonear. Come nighttime, Under Bron opens its doors. The ground floor contains an art gallery, two dancefloors and a small terrace. Upstairs you will find a disco room, a bar with mixed music and another terrace. The club, Forssell explains, is for “Discogs-fanatics, dance freaks, art students and people that are open to things out of the ordinary.” 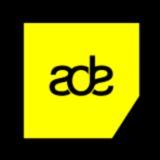 The official 2014 ADE Magazine, brought to you by DJBroadcast.

The official 2014 ADE Magazine, brought to you by DJBroadcast.