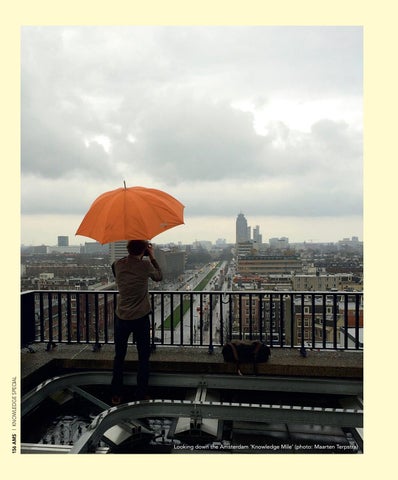 Amsterdam’s smartest street Welcome to the Wibautstraat, one of Amsterdam’s busiest thoroughfares. If the people behind the Knowledge Mile have their way, this so-called ‘smartest street in the city’ is about to get a whole lot smarter.

Housing several universities and institutions of higher learning (the Amsterdam University of Applied Sciences, the Amsterdam School of the Arts and Inholland University of Applied Sciences), the approximately two-kilometre stretch of the Wibautstraat and Weesperstraat from Nieuwmarkt to the Amstelplein has more students than any other street in the city – an estimated 60,000 by 2018. This constitutes an intelligent street by any standard. But Matthijs ten Berge, director of the Amsterdam Creative Industries Network (ACIN) and the brains behind the Knowledge Mile (www.knowledgemile. org), wants to take this smart street to a whole new level. He plans to turn the arterial avenue into an ‘applied research ecosystem’: simply put, a living laboratory in which to solve today’s urban problems. ‘I envision it as a tool to show the world what we can do as a network and with the next generation,’ says Ten Berge. ‘The Knowledge Mile is a community, but it also functions as a test lab. It’s a great place to showcase innovations for urban problems.’ It’s all about connection. The boards of three local universities of applied sciences that specialise in creative industries and ICT were interested in pooling their research and resources. Through ACIN, they are able to work with industries and government bodies outside the organisation. ‘We function as an interface,’ says Ten Berge. In addition to the researchers and students associated with these institutions, the

Knowledge Mile accommodates industries such as the Dutch Railways company and former newspaper buildings reborn as hotels and creative spaces (The Student Hotel and the Volkshotel). ‘We want to bring them together so they know one another and can make the connections,’ says ten Berge. ‘We’re trying to create solutions, and once we have the answers we will try to test them along the Knowledge Mile.’ Case in point: after a local school complained about the prevalence of scooters on nearby streets, the Knowledge Mile brought the relevant parties together to come up with a solution. The result is a street tile for cycle paths that is integrated with light and audio sensors to warn cyclists of approaching scooters. ‘It’s an example of a prototype solution for a big community problem,’ says Ten Berge. The technology will eventually be tested along the Knowledge Mile. As a living lab, Wibautstraat is the perfect place to experiment. ‘You can find almost all the problems of a mid-size metropolis like Amsterdam here on this street,’ says ten Berge. He’s talking about air pollution, traffic, flooded metros resulting from climate change, overcrowding, mobility issues, an ageing population and even an influx of refugees. The Refugee Company The Refugee Company is a Knowledge Mile start-up tackling this last urban problem. Founded by a Dutch woman, Fleur Bakker,

Amstelhuis This 2015 experiment in new living for the elderly is a simple concept: private housing for able-bodied 70-plussers with communal areas, including a library and a club where they can socialise with other residents and seniors from the neighbourhood. ‘It’s amazing that it’s new, because the idea is very basic,’ says Marry van Straten, who formerly specialised in urban vitality at the Amsterdam University of Applied Sciences and who now heads the collaboration between the school and the Amstelhuis. ‘This is a place where you can live in your own apartment and still easily meet other people. It’s good for older people and the neighbourhood, and it is also commercial.’ And that’s what is different about the Amstelhuis: it is a private initiative by real estate developers Cocon Vastgoed, who bought the Amstelhuis after its last incarnation as a traditional old-age home and expect it to be self-sustaining within two years. Volunteers and a few employees currently staff the cafe – known as the Amstelhuis Sociëteit – where a latte can be bought for as little as €1.75. Lifelong Amsterdammer Dini Oud moved from a third-floor walkup in Buitenveldert to a one-bedroom apartment in the Amstelhuis, where she doesn’t have to worry about getting injured or being on her own. ‘Every time I come home, even on rainy days on the bike, I’m glad to arrive here,’ says the former librarian. ‘I see people I know, so I’m not coming to an empty home.’ www.hetamstelhuis.nl

‘The Amsterdam University of Applied Sciences is designing an app to help refugees and we’re giving them feedback’ (Jay Asad, the Refugee Company)

The Refugee Company Originally from Palmyra, Syria, lifelong expat Jay Asad found himself in a refugee camp in the Netherlands for more than a year. ‘In the camp, I witnessed guys sitting around doing nothing, waiting for information about their future,’ says Asad. ‘These men had to drop their hammers and run. They want a normal life, they don’t expect to be handed things. They want to be productive and to work – to be seen as an asset to society and not a burden.’ Enter the Refugee Company, a self-funded Knowledge Mile start-up that Asad cofounded last year. Its mission is to connect refugees with paying jobs. In its showroom on the Wibautstraat, artists and craftspeople have space to create and network. There are workshops for different trades, from catering to silk screening and bicycle repair. Paid jobs have included a Booking.com convention where refugees designed banners and gave workshops. Asad also connected a Syrian upholsterer with a Dutch one, which resulted in gainful employment for the refugee. Asad primarily provides refugees with information about doing business in the Netherlands, where the rules and mentality are different from what they were back home, including in his native Syria. ‘We’re constantly on the lookout for jobs,’ says Asad. ‘We have chefs, photographers, heart surgeons and janitors. This is a whole country that has moved.’ www.refugeecompany.com

and a Syrian refugee, Jay Asad, the startup connects refugees with jobs, giving an otherwise idle population a chance to find ‘dignity through work, not handouts’ while they await their legal status, says Asad. As an example of this encouraging of entrepreneurship, Asad helped to set up a cheese factory in one refugee camp; the cheese maker is now trying to go into his own business. A firm supporter of the project, ten Berge encouraged the Refugee Company to come to the Knowledge Mile. They currently work out of an office in the shared WeWork space and have a design studio in the Wibautstraat’s Student Hotel. The Refugee Company was also approached by the Faculty of Digital Media and Creative Industries of the Amsterdam University of Applied Sciences, which was interested in working with refugees. ‘Everyone is interested in refugees. It’s the topic of the day,’ says Asad. ‘The school is designing an app to help refugees and we’re giving them feedback. For anyone interested in refugees, we can facilitate. We can also provide designers. It’s all about networking.’ Amstelhuis, a community for the elderly and another collaboration between the Knowledge Mile and the Amsterdam University of Applied Sciences, is a perfect example of a living lab. On the edge of De Pijp with a view east over the Amstel River, the privately-run Amstelhuis provides 120 small, private and affordable rental apartments to people 70 years and older. Its residents must be willing and able to care for themselves, but a shared library and club provide the social contact that according its founders is critical condition for happy living. The students have made nine prototype apps for Amstelhuis residents, including one that enables them to invite people to dinner in their apartments or to request items from the shop. They also give iPad lessons to the seniors, teaching them how to Skype with their families and to navigate train travel. ‘We want to bring modern technology

from the hogeschool to make people more independent,’ says Marry van Straten, former Project Leader in Urban Vitality at the Amsterdam University of Applied Sciences and currently the intermediary between the school and the Amstelhuis. ‘We aim to be a city friendly to all ages, and to do something for the city at the school. We have a lot of knowledge to give back.’ There are also Knowledge Mile collaborations with the business world: US conglomerate Bell Labs is, for example, using the Knowledge Mile to test its applications. And Dutch flagship airline carrier KLM is looking to develop smart data solutions with the Mile’s many ICT students. It’s a two-way street, says ten Berge: ‘Education programmes must adapt to a changing world and changing technology. Otherwise, they are educating children for jobs that will be extinct in a few years.’ Local businesses are also an essential part of the Knowledge Mile. Hartog’s Volkoren Bakkerij, an Amsterdam institution that has been baking whole-wheat bread since the 19th century, originally planned to grow grain in the Wibautstraat’s meridian strip, promoting a greener, healthier lifestyle and bringing residents closer to the foodproduction chain. The project was ultimately scrapped: although the wheat plants would have cleansed the air, helping to alleviate the street’s air pollution, the grain would have been too dirty to eat. Hartog owner Fred Tiggelman has already found a replacement project: a neighbourhood park where wheat can be grown with the help of the city’s children. ‘I think the Knowledge Mile is a beautiful thing,’ says Tiggelman. ‘It’s all about sustainability. A lot of new businesses are involved and they are all working in environmentally friendly ways.’ Initiative, connection – these are the buzzwords of the Knowledge Mile. There are high hopes indeed for what was formerly known as the ugliest street in the city. ‘The ambition of the Knowledge Mile is to become the smartest street in the world,’ says ten Berge. ‘Or at least in Amsterdam.’ &lt;

After a local school complained about the prevalence of scooters, The Knowledge Mile brought the relevant parties together to come up with a solution: a street tile for cycle paths that is integrated with light and audio sensors 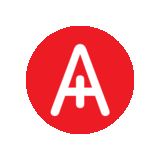