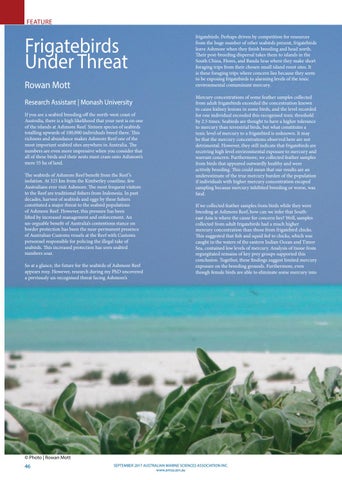 Frigatebirds Under Threat Rowan Mott Research Assistant | Monash University If you are a seabird breeding off the north-west coast of Australia, there is a high likelihood that your nest is on one of the islands at Ashmore Reef. Sixteen species of seabirds totalling upwards of 100,000 individuals breed there. This richness and abundance makes Ashmore Reef one of the most important seabird sites anywhere in Australia. The numbers are even more impressive when you consider that all of these birds and their nests must cram onto Ashmore’s mere 55 ha of land. The seabirds of Ashmore Reef benefit from the Reef ’s isolation. At 325 km from the Kimberley coastline, few Australians ever visit Ashmore. The most frequent visitors to the Reef are traditional fishers from Indonesia. In past decades, harvest of seabirds and eggs by these fishers constituted a major threat to the seabird populations of Ashmore Reef. However, this pressure has been lifted by increased management and enforcement. An un-arguable benefit of Australia’s contentious stance on border protection has been the near-permanent presence of Australian Customs vessels at the Reef with Customs personnel responsible for policing the illegal take of seabirds. This increased protection has seen seabird numbers soar. So at a glance, the future for the seabirds of Ashmore Reef appears rosy. However, research during my PhD uncovered a previously un-recognised threat facing Ashmore’s

frigatebirds. Perhaps driven by competition for resources from the huge number of other seabirds present, frigatebirds leave Ashmore when they finish breeding and head north. Their post-breeding dispersal takes them to islands in the South China, Flores, and Banda Seas where they make short foraging trips from their chosen small island roost sites. It is these foraging trips where concern lies because they seem to be exposing frigatebirds to alarming levels of the toxic environmental contaminant mercury. Mercury concentrations of some feather samples collected from adult frigatebirds exceeded the concentration known to cause kidney lesions in some birds, and the level recorded for one individual exceeded this recognised toxic threshold by 2.5 times. Seabirds are thought to have a higher tolerance to mercury than terrestrial birds, but what constitutes a toxic level of mercury to a frigatebird is unknown. It may be that the mercury concentrations observed here are not detrimental. However, they still indicate that frigatebirds are receiving high level environmental exposure to mercury and warrant concern. Furthermore, we collected feather samples from birds that appeared outwardly healthy and were actively breeding. This could mean that our results are an underestimate of the true mercury burden of the population if individuals with higher mercury concentration escaped sampling because mercury inhibited breeding or worse, was fatal. If we collected feather samples from birds while they were breeding at Ashmore Reef, how can we infer that Southeast Asia is where the cause for concern lies? Well, samples collected from adult frigatebirds had a much higher mercury concentration than those from frigatebird chicks. This suggested that fish and squid fed to chicks, which was caught in the waters of the eastern Indian Ocean and Timor Sea, contained low levels of mercury. Analysis of tissue from regurgitated remains of key prey groups supported this conclusion. Together, these findings suggest limited mercury exposure on the breeding grounds. Furthermore, even though female birds are able to eliminate some mercury into

The Australian Marine Sciences Association (AMSA) Bulletin, Number 200 Issue 2 (September 2017). Every member receives this Bulletin and it is the primary means of communication between AMSA Members. The Bulletin has been the premier AMSA publication since 1963. 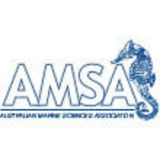